This essay will compare the 19th, 20th and 21st century in relation to the main public health strategies used in United Kingdom. It will also compare the similarities and differences of the living conditions in towns and cities between the three named centuries above. In comparing the differences between 19th, 20th and 21st century, the living conditions in the 19th century caused so many deaths.

This is because health was very poor and people went through many health issues such as poor and over-crowded housing which caused the rapid spread of diseases, pollution and poor environment as people were ignorant to the causes and consequences of the pollution and poor sewage system which brought about terrible smell that was unbearable for living.

Don't use plagiarized sources.
Get Your Custom Essay on Compare Historical and Current Features of Public Health Just from $13,9/Page

The cholera episode that was killing people became an interest to Dr John Snow (1813-1858). He did various investigations and he eventually found pointed out in his investigation a particular water supply that was coming from the contaminated River Thames was the cause of the cholera outbreak. In Beveridge’s report in the 20th century, it helped to bring a change to the educational standards in the areas that were highly affected by poverty. The Beveridge report stated that all working people must pay weekly contributions, those contributions were used as benefits by the government to pay people who were sick, unemployed, retired and widowed.

The benefits helped the under privileged to meet some of their basic needs which were impossible for them in the 19th century. The National Health Service came into effectiveness by Clement Attlee’s, who was one of the members of the Labour Government due to the outcome of Snow’s report. With the 21st century, the public health was drastically changed compared to the 19th and 20th century. This was because the public health white paper, choosing health: making healthy choices easier, (2004) was introduced as the awareness of health was growing in size which forced the government to bring bout the public health white paper.

This document promoted societal fairness, dealing with broad causes of ill-health, inequality in the society as well as identifying individuals needs to support and empower them. In the 21th century, people are more informed; technology and science have improved, making better medical system more efficient and effective with more improved living conditions, compared to the two previous centuries. The similarities between the 19th, 20th and 21st Century was that famous personalities mentioned above aimed at improving the health of the populace over time.

They all carried out numerous investigations and research to bring about positive results. In the 21st, there was the Health Protection Agency, an independent organisation that focuses on protecting individuals’ health throughout the UK. There is also the National Institute for Clinical Excellency also an independent organisation; their responsibility is to provide national guidance and treatment of ill-health which has improved the living standard, condition and a huge improvement of health in the wider UK population. Conclusion Before public health came into effect living condition was very poor causing premature death.

There was also inequality; the wealthy could afford to live in better areas, good education and to pay for good medical treatment. The under privileged were left with no choice but to live one day at a time. In the 20th and 21st century, there were so many strategies used to improve health and inequality in Britain. However in the 21th century, there were more strategies implemented to improve public health which were set out in a document and had three foundation values. All these was put together to improve, protect and empower the lives of individuals in the UK population. 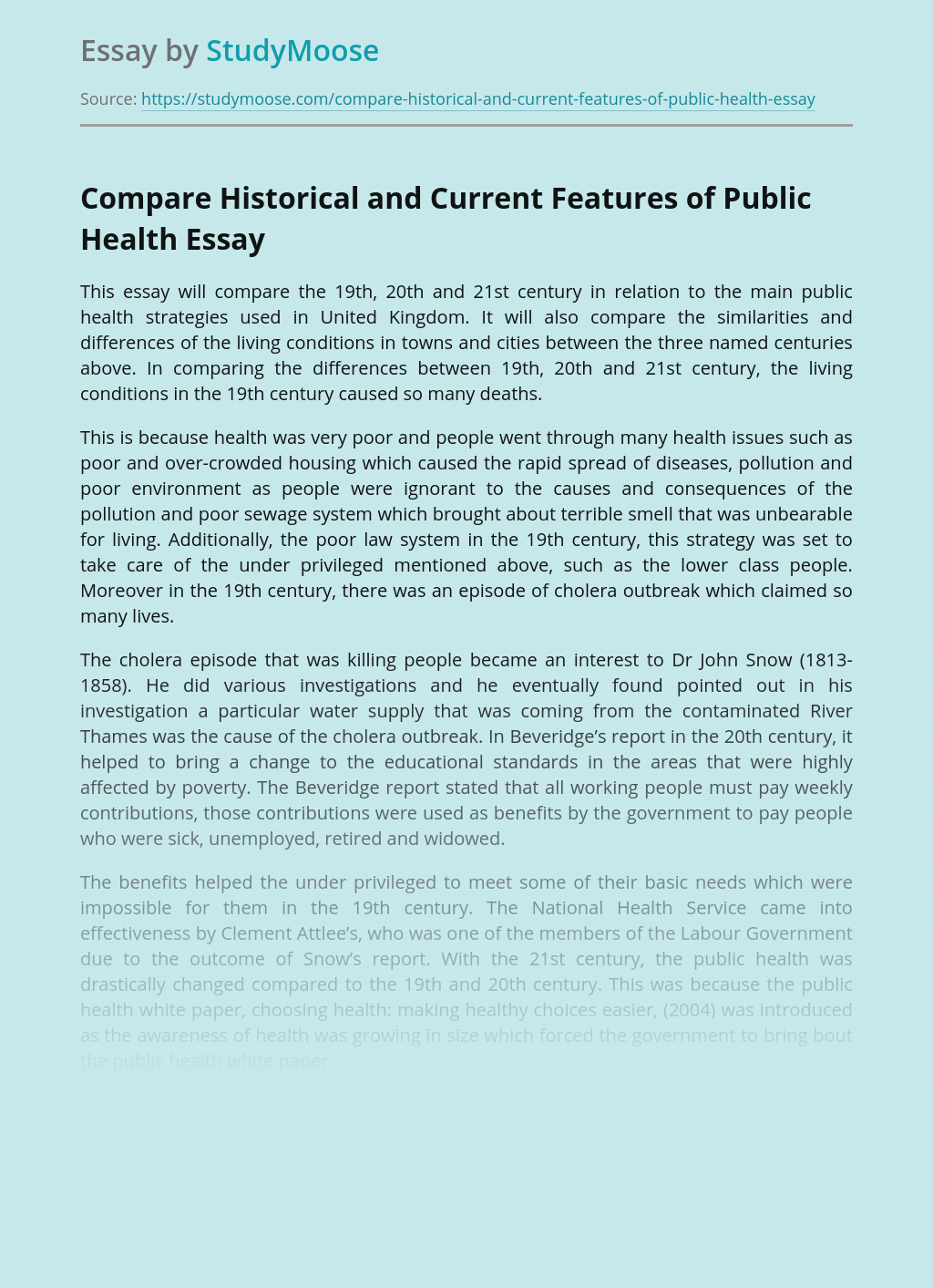 1. Understand why efficient interaction is crucial in the work setting 1.1 – Recognize the various factors individuals interact To express needs; to share ideas and details; to reassure; to express feelings; to develop relationships; socialise; to ask concerns; to share experiences Individuals interact in order to develop and preserve relationships with others, to offer...

Get Essay
Promote Equality and Inclusion in Health

For this assignment the class was instructed to describe the different forms of competition that take place among various types of health care organizations, evaluate the benefits and pitfalls of competition in health care and suggest alternatives if competition was not the primary driver of operations in the U.S. health care system, explain the elements...

Links Between Personality and Health

The importance of understanding the links between personality and health are being increasingly recognized within the scientific and psychological society, over the years research and theoretical advances have begun to uncover that personality can have an effect on health, whether good or bad. Illnesses can be a cause of many factors that may be biological,...