The two stories that which be compared will be the “Flight” by Doris Lessing and the “Superman and Paula Brown’s New Snowsuit” by Sylvia Plath.

Don't use plagiarized sources. Get your custom essay on
“ Compare how Doris Lessing and the writer of one other story in the selection presents character dealing with the loss ”
Get custom paper
NEW! smart matching with writer

Usually the old person has different views about life therefore the argument can occur sometimes.

In the “Superman” the boy does not show in a very obvious way how he deals with the loss. In the both stories the main character faces the reality of the real world. The boy just stopped dreaming about the superman and the reality came and he realised that there is no one to help him except of himself.

In the “Superman” the boy dreams about his uncle being like a superman. “Looking remarkably like my uncle Franc who was living with mother and me”. The boy thought very well of his uncle, he thought he was a brave and a strong man.

When I came back ” he swung me so high in the air that my hand grazed the ceiling”. This quote proves my point that he was a nice and a powerful person. Moreover “Uncle Franc” really liked his nephew. As the soon as the Boy came back from school his Uncle meet him at the door. “How’s my favourite trooper?” he asked with enthusiasm in his voice. Another point about the nephew is that he associates everything with darkness. When he was going to sleep he was looking out of his window ” far across the darkening water”. This sentence emphasises that the boy was feeling sad because usually darkness is associated with sadness and sorrow. “I marvelled at the moving beacons until it grew completely dark”.

The boy likes to compare things with colours. “These were the days of Technicolor dreams,” he thought. His mother believed that he should get a lot of sleep so he went to bed early. “This was the best time of the day when I could lie in the vague twilight”. He thought of everything in dark, gloomy way. ” The dull, green light of late afternoon came closing down on us, cold and final as a window blind”. Everything is dull; everything is “closing as a blind”. He meant that everything is finishing, closing down as the war comes up. Another quote to support my point is: “There was my dark brown singled house”. Dark again and singled. No one around it, the house is on his own, no help, no nothing. In “Flight” the main action happens when it is dark outside as well.

In “Flight” the Grandfather does not want to loose his granddaughter for several reasons. One of them is that all his other older granddaughters have gone and there was only one left. The Grandfather was talking to his daughter about his last love one getting married and he sad “But now the house would be empty”. As in “Superman” the boy stopped dreaming and his life became empty. The grandfather sad “She’s the last one. Can’t we keep her a bit longer”. The lost of his last granddaughter would make a great impact on his life and he is afraid of being on his own.

In “Flight” the granddaughter eyes “veiled themselves”. This means that her eyes are partly shut and she does not wants to show any emotions to her granddad. In “Superman” when the boy got told off for doing what he has not done he pushed the chair away from the table, “not looking at Uncle Franc”. The boy was not particularly fond of his Uncle so he shut the world in front of him by not looking at Franc. His uncle was like the whole world because the boy talked about him, dreamed about him and just loved him. So the superman disappeared. “The silver airplanes and the blue capes all dissolved and vanished”. No more dreams about superman, no more stories, no more real friendship between him and his uncle. Everything “Vanished”.

All these facts and quotes sum up to make a good impact on the reader and to emphasise the fact of growing up and facing a real world with real difficulties.

“That was the year the war began, and the real world, and the difference”.

Compare how Doris Lessing and the writer of one other story in the selection presents character dealing with the loss. (2020, Jun 01). Retrieved from https://studymoose.com/compare-doris-lessing-writer-one-story-selection-presents-character-dealing-loss-new-essay 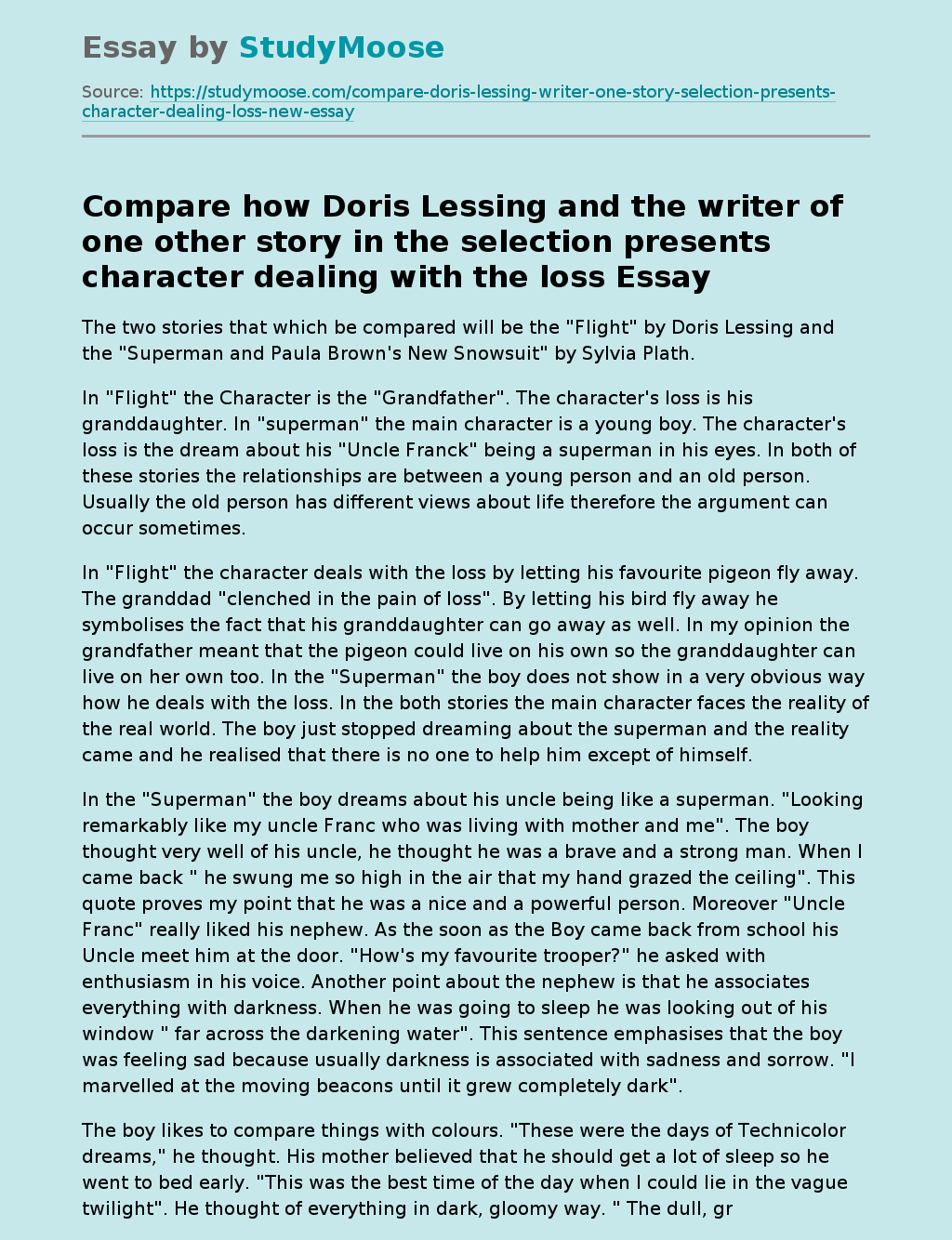