This essay will try to explain and find the comparisons and the contrasting views in Both “London 1802” and “Dover Beach” according to both of the poets views of their situation.

Don't use plagiarized sources. Get your custom essay on
“ Compare and Contrast Wordsworths “London 1802” and Arnolds “Dover Beach” as responses to the poets views of their situation ”
Get custom paper
NEW! smart matching with writer

He talks about people needing to follow after John Milton’s character and inspiration. I.e. Living a humble life, in a cheerful manner, and to stop being selfish.

“Dover Beach” was written by Matthew Arnold in the 1840’s, early on in the scientific revolution, when the number of actual churchgoers was starting to decrease slightly. The decrease in church attendance is only really noticeable towards the end of the nineteenth century and at the beginning of the twentieth century.

In the 1840’s during the beginning of the scientific revolution, where people were starting to disband their religious beliefs, because of the scientific advances which were going on in the British Empire in the nineteenth century, which were enabling proper, scientific explanations for things that were previously usually explained by religion, such as The Creation Theory in the bible which was superceded by the theory of evolution, which Sir Charles Darwin discovered in the nineteenth century.

Both, “Dover Beach” and “London 1802” were written in the first-half of the nineteenth century, so the subjects that they are writing the poems about should be similar, which they are, so they are good poems to compare and contrast for this reason.

Both of these poems are about how gloomy the worlds around the poets themselves are. For example in “London 1802”, when Wordsworth is talking about the state of England in the nineteenth century,

“England hath need of thee; she is a fen

Here, Wordsworth is saying how England needs the likes of John Milton, because at the moment, England is a beautiful place which has been corrupted, in religion and literature.

In Dover Beach, when Arnold is talking about the sounds he hears and what they remind him of,

“Of pebbles which the waves draw back, and fling,

At their return up the high strand,

Begin, and cease, and then again begin,

With tremenulous cadence slow, and bring

The eternal note of sadness in.”

Here, Arnold is talking about the rhythm that the waves make on the beach when they constantly pickup the pebbles and smash. Or cascade, them against the beach in a slow, sad rhythm. This is implying how people are losing their religious beliefs, for the ever-going scientific revolution.

Of inward happiness. We are selfish men;”

Here, Wordsworth is talking about how people have exchanged their inward happiness. In the following two extracts from Arnold’s poem it shows how people are losing their religious faith.

“The sea of faith

Was once, too, at the full, and round earths shore”

Here, Arnold is talking about how he remembers when religion was very widely believed, almost sacrament, but the next extract says what is going to happen in regards to religious faith.

“But now I only hear

Retreating to the breath”

Here, Arnold is saying how the sea of religious faith is receding; this is because of the scientific revolution which was going on in the nineteenth century.

In “Dover Beach” Arnold talks about people who have lost their religious faith, and how it was inevitable, but, he did not want it to happen and he accepts that it cannot be reversed and it will not be stopped by anyone. As Arnold says in the following extract.

Arnold is saying here that humanity should be true to itself and accept its fate of losing its religious beliefs.

Whereas, in “London 1802”, Wordsworth is talking about what is happening at the moment, and how he wanted it to be, if John Milton was alive. As it shows in the following extract.

“Milton! thou shouldst be living at this hour:

This is the beginning of the poem, where Wordsworth is saying that John Milton should be alive at that time, because we need him. A bit later on in the poem Wordsworth says what he wants from him,

“Oh! raise up, return to us again;

And give us manners, virtue, freedom, power.”

Wordsworth wants Milton back because he can bring back with him, things such as manners, virtues, freedom, and power. The reason Wordsworth thinks this, is because John Milton was a very respected poet, but he was blind, so he had to memorise his poems, and recite them from memory, he also lived a very humble life, not what was expected from a highly respected person at the time.

In “London 1802”, Wordsworth talks the plain truth, he says what is really happening, and that man is accepting it for what it is, and not doing anything about it.

Whereas, in “Dover Beach”, Arnold puts across the impression that people are alluding themselves about the state of the world around them, Arnold thinks that it is all just one big illusion, as in the following extract from his poem.

“To one another! for the world, which seems

To lie before us like a land of dreams,

So various, so beautiful, so new,

Hath really neither joy, nor love, nor light,

Nor certitude, nor peace, nor help for pain;”

Here, Arnold is saying that the world is just one big illusion, and that it is not as good as it seems.

The moods of the poets are different in these two poems, Arnold seems to write in a very passionate flowing way, whereas Wordsworth seems to write in a more urgent, rushed manor. For example, in “London 1802”, Wordsworth writes in little rhyming phrases, usually with urgency and emphasis, such as in the following extract.

“Of inward happiness. We are selfish men;

Oh! raise us up, return to us again;”

An example of the flowing, rhythm and passion of Arnold’s writings can be shown in the following extract.

“Where the sea meets the moon-blanched land,

Listen! You hear the grating roar

Of pebbles which the waves draw back, and fling,

At their return up the high strand,

Begin, and cease, and then again begin,

With tremulous cadence slow, and bring

The eternal note of sadness in.”

The way he rhymes in this section, shows how he is trying to capture the rhythm of the waves, and how his works are flowing. The end line shows how he puts passion into his writings.

Compare and Contrast Wordsworths "London 1802" and Arnolds "Dover Beach" as responses to the poets views of their situation. (2020, Jun 01). Retrieved from http://studymoose.com/compare-contrast-wordsworths-london-1802-arnolds-dover-beach-responses-poets-views-situation-new-essay 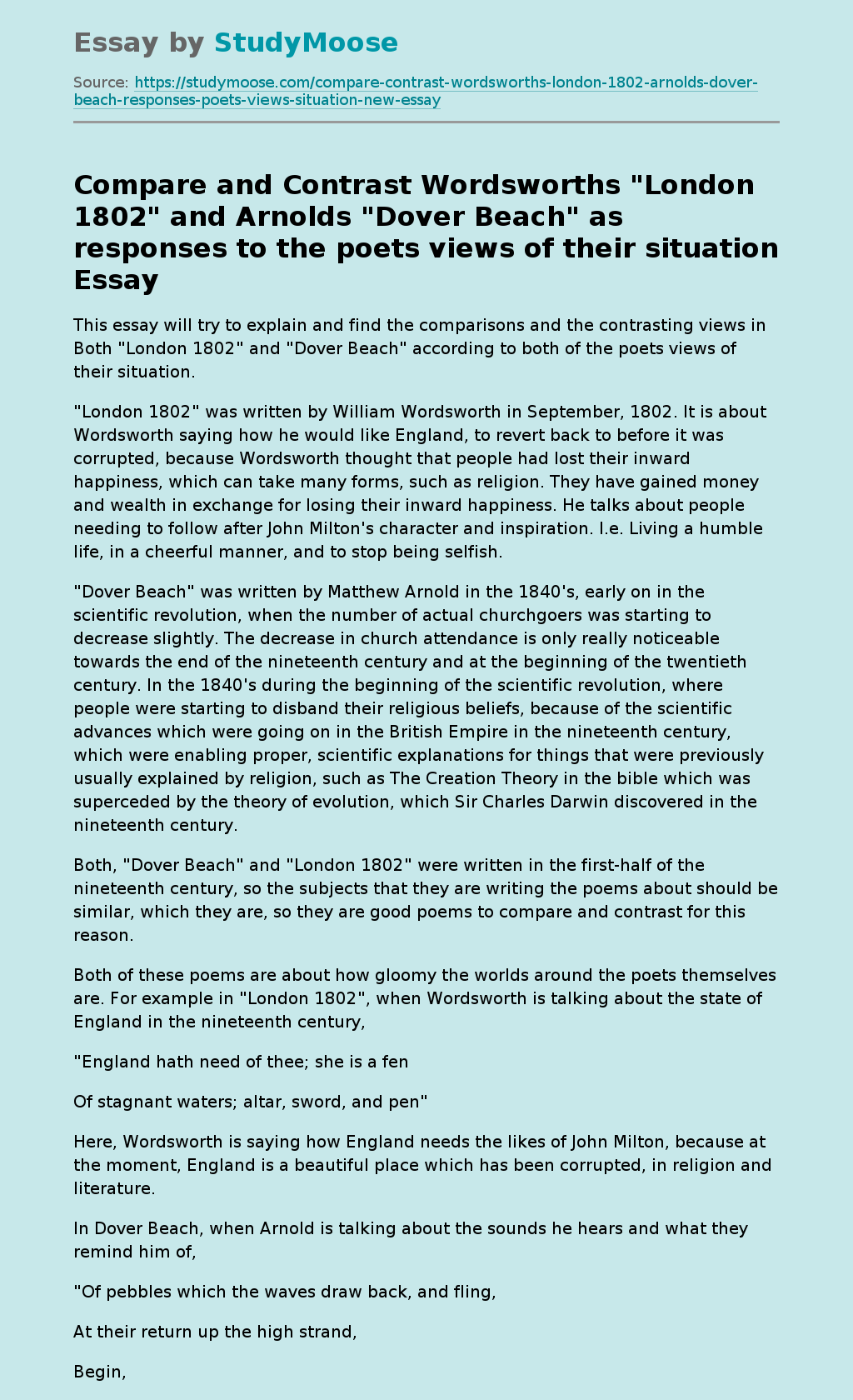