Compare and contrast: "How do I love thee?" by Elizabeth Barrett Browning and "To his coy mistress" by Andrew Marvell

In this essay I will be compare and contrasting “How do I love?” and “To His Coy Mistress”. I will be discussing how the two poems are similar and different in this way of their treatment towards the one they love.

To his coy mistress is a poem which shows a lot of reasons and explanation for this love consider why the poem is very long.

But the poem is also very sexually orientated, this man who is confessing his love and desire for this young girl.

Don't use plagiarized sources. Get your custom essay on
“ Compare and contrast: “How do I love thee?” by Elizabeth Barrett Browning and “To his coy mistress” by Andrew Marvell ”
Get custom paper
NEW! smart matching with writer

It shows that she is very pure as she is still a virgin, so she is in a position where she is quite vulnerable.

She is only young and still quite not sure on the acts of right and wrong.

The one thing that is mentioned in this poem mainly is the title “His Mistress” so can not be seen as so pure and innocent as it seems a mistress is where a married man’s mistress is a woman who is not his wife and who he is having a sexual relationship with.

“Nor would I love at lower rate” this meaning that the man would not love her any less when he already has a lot of love for this young girl.

So his love for her would only grow not be less of it, again this is the same expressions used in how do I love thee?

By also her being quite vulnerable and innocent he says “This coyness lady, were no crime”.

Meaning as she is very innocent she would not commit to any crime or act to break or go against the law.

Both poems show similarities in how much they love their partner and quite how highly they think of them.

In the poem “To his coy mistress” from the beginning he describes his love just based on her personally on the outside.

But towards the end he talks about their love in the future and about having children.

So by saying “Through the iron gates of life” this is representing giving natural birth of a child from the mother’s womb, again this is based on his future with them both together. Basically saying there’s no time to waste, get married, and have children no time to lose maybe.

How do I love thee? There is throughout the poem repetition constantly telling the person how much love and desire they have for them.

Compared to “his coy mistress” you automatically know that the person is expressing their feelings in the poem is a male; expect in how do I love thee? There are both possibilities that it can be either gender.

“Smile, tears, of all my life” this shows that it can be a feeling which is equal enough for either female or male maybe would say.

The sonnet seems to come across as quite religious for mentioning god, faith and praise.

Overall the sonnet was based on telling us the repetition on how much this person loves them by counting the many ways of all the ways they could explain their love.

No matter what, their love will be constantly growing rapidly and be stronger after death. So this is most probably an undying love.

All together both poems represent different ways of showing love, where there is the sonnet which is a very short poem due to the fact it is so short it contains many deep feelings, religiously, happily, sadly and a bit sentimental (when talking about his childhoods faith).

“To his coy mistress” very long but not based on love, based more on an obsession than love , again contains a lot of sexual feelings when talking about his future with this young quiet girl. He explains how he loves every part of her mainly on her appearance so not much said on her inner beauty.

He seems a very forward person and could be pushing her into something such as marriage, towards the end of the poem he discusses about giving up her virginity and finally having children.

But overall the sonnet would be the one I prefer the most was an enjoyment to read and was not a poem as it was not a poem that was too long, not something I would get bored with easily.

I like how it is very deep and has a lot of meaningful feelings, “To his coy mistress” I think it was quite unusual not something I have read before and seemed to be basically too sexually orientated.

Compare and contrast: "How do I love thee?" by Elizabeth Barrett Browning and "To his coy mistress" by Andrew Marvell. (2020, Jun 01). Retrieved from https://studymoose.com/compare-contrast-love-thee-elizabeth-barrett-browning-coy-mistress-andrew-marvell-new-essay 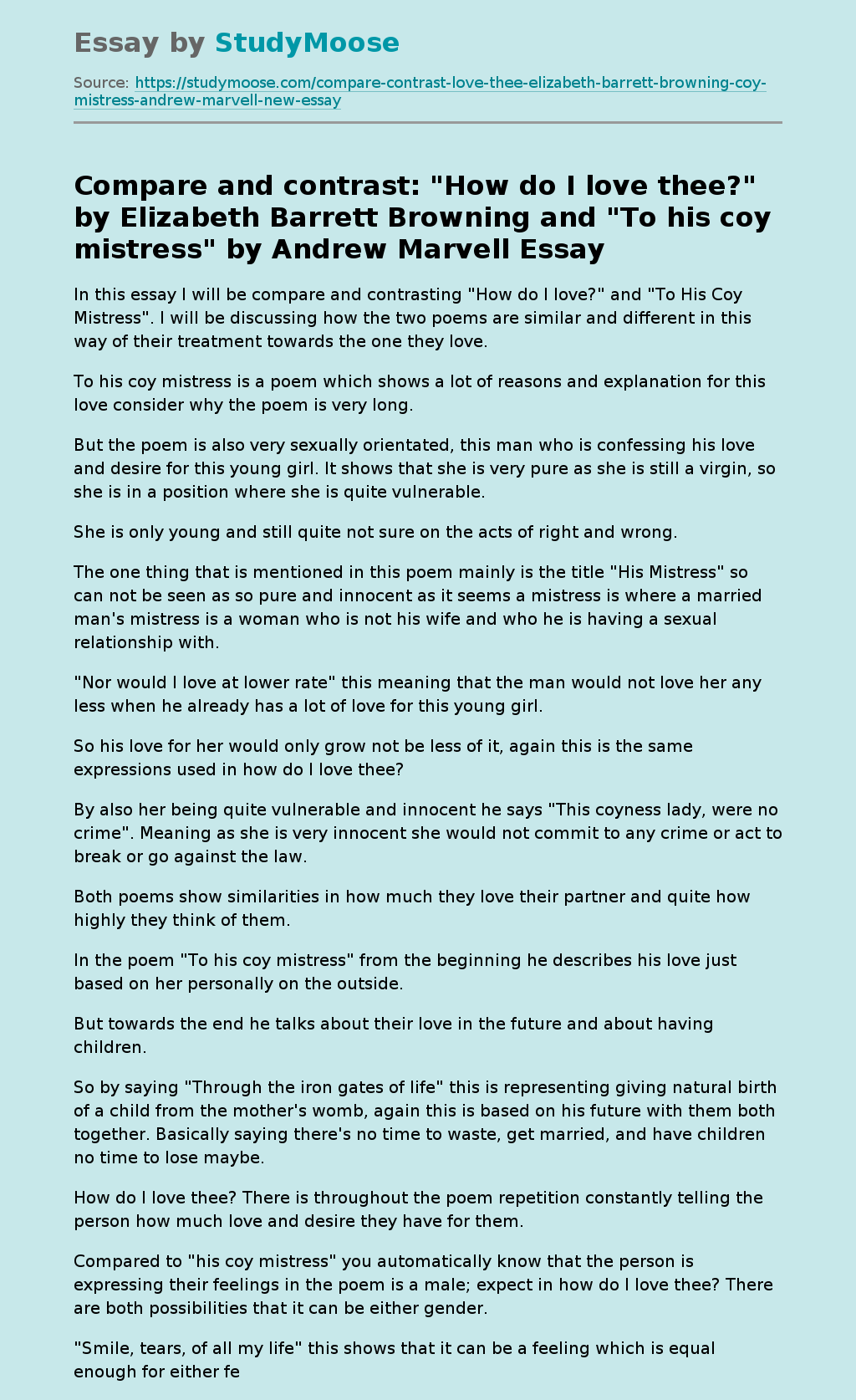