Compare and Contrast with Marius

During the course of students’ educational careers we come across many assignments that require us to write an essay on a specific topic in which we use different writing methods and steps to develop a completed paper. To help students with their writings, Richard Marius, a very educated and well known writer has written an article titled Writing Drafts in which he describes his own writing techniques that he uses to write an essay.

Don't use plagiarized sources.
Get Your Custom Essay on Compare and Contrast with Marius Just from $13,9/Page

In this essay I will compare and contrast the writing techniques of Richard Marius and the writing methods I use when I write an essay. Although Marius differs than I do in the way he prints out his drafts, we are similar in the way we brainstorm ideas before writing our first drafts. Also during the process of writing the second draft we are similar because we both make radical changes on the ideas and concepts we had already thought of and we also like to focus on the overall level of editing while proofreading in the third draft.

Marius and I are different in the way he analyzes his first draft after printing it out. For example, in his article he suggest that we print out what we have written so far, get up from where we are sitting, sit somewhere else and read it. Then before bedtime re-read it so that we can subconsciously organize and create ideas while we sleep so that in the morning we wake up to possibly discovering new ideas. On the other hand, when I worked on my history assignment I did not do what Marius suggested. Instead I printed out my first draft and took it to my teacher so that she can read it and give me feedback on what she thinks I need to work on in order to have a more developed paper.

However, Marius and I are similar in the way we brainstorm ideas. In his article he suggests to write down a list on topics and ideas that we would like to cover in the essay, not really focusing on the order of importance of ideas but just to get ideas flowing and that is exactly what I do before I begin writing my first draft. I think about my main subject and I branch off different sub topics by writing a list of points I want to address in my paper. This method helps me on the development of ideas for my paper and I find it really effective.

In addition we are both similar when developing the second draft because we both are willing to make radical changes. For instance, Marius advises not to hesitate in changing the second draft if you have come up with new ideas. In his article Marius states, “If your thesis changed while you were writing your first draft, you will base your second draft on this new subject” (Marius 92). Changing a thesis in an essay is a very radical move when writing because that means you have to re-evaluate the whole essay in order for it to connect with your thesis.

Similarly, when I worked on the second draft of my history assignment in addition to editing the few things my teacher had suggested after showing her my first draft, I made very big changes to my paper. I completely changed my thesis and cut out unnecessary subjects that I had wrote in my first draft. By doing this it helped me to expand my thought process on my history assignment and I was able to add a vast amount of information to my paper.

Lastly, Marius and I are similar in the way we focus on the overall level of editing while proofreading our third drafts. For instance, Marius says, “In your third draft, you can sharpen sentences, add information here and there, cut some things, and attend to other details to heighten the force of your writing” (Marius 92). Likewise, during the third draft of my history assignment I also focused on sharpening sentences by checking for grammar and spelling errors to polish my paper. Adding minimal information and cutting back on some unnecessary thoughts added more focus on my subject so the reader wouldn’t get bored or irritated with random rambling and attending to details to heighten my force of writing helped to add depth and understanding. This really helped my paper come together in a more formal way because now I had a paper that is fully developed.

In conclusion, even though there were some differences in the way Marius and I analyzed our first draft in our essays we were still similar on how we brainstormed ideas. In the second draft we both made radical changes to help add more vast information and in our third draft we both like to focus more on the overall editing while proofreading to polish our paper completely. I believe that Marius’ processes of developing an essay are excellent examples to follow when writing an essay but at the same time we should not be afraid to do things differently. Everyone has their own ways of doing things and writing is certainly not something that should have a set step by step process.

Compare and Contrast with Marius. (2016, Sep 18). Retrieved from https://studymoose.com/compare-and-contrast-with-marius-essay 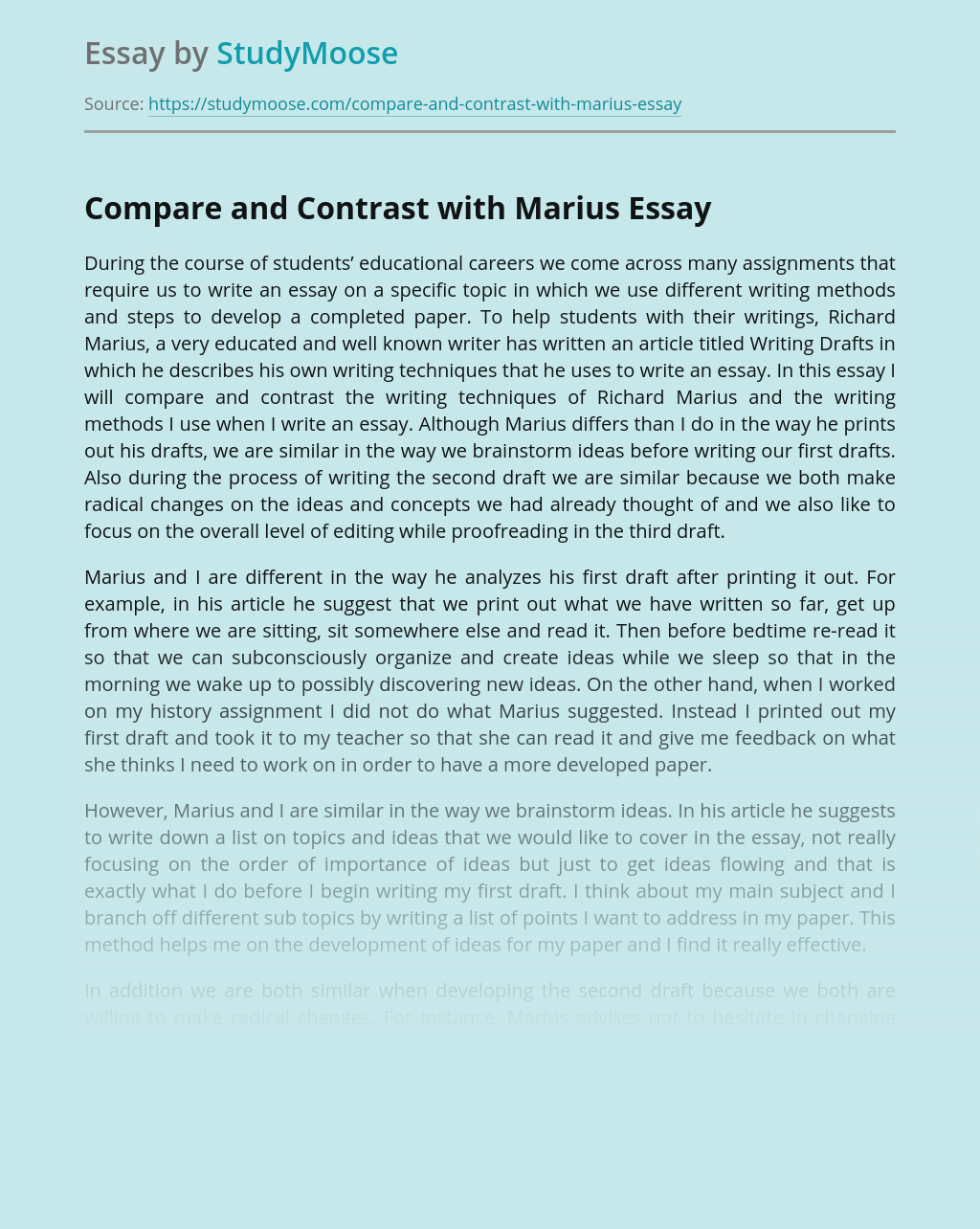 The Banking Sector has for centuries now formed one of the pillars of economic prosperity. Indeed history provides us with some starting information regarding how banks provided finance for imperialist ventures in newly acquired colonies. Over time banks have formed an important part in providing an avenue for both savings and investments. Land, Labor, capital...

Facility Design in the Hospitality Sector

However this stage does not only involve the budget for finance but also time budget is an important aspect to be considered in which a time schedule is set and judged whether it’s appropriate or not. According to the project and development manager of Holiday Inn Harare all these stages have to be conglomerated in...

During the course of students’ educational careers we come across many assignments that require us to write an essay on a specific topic in which we use different writing methods and steps to develop a completed paper. To help students with their writings, Richard Marius, a very educated and well known writer has written an...

What contributions to the novel Jeckyll and Hyde are made by minor characters such as Poole and Sir Edward Danvers?

There are many minor characters who play a crucial role in themes and foreshadowing ; they act as triggers for the development of incidents in the story of Dr Jekyll and Mr Hyde. These characters are: Enfield, the maid who witnessed Danvers Carew’s murder, Sir Danvers Carew himself, the policeman (Newcomen), the old woman who...

The Public Company Accounting Oversight Board

The Sarbanes-Oxley Act created the Public Business Accounting Oversight Board (PCAOB) to presume the responsibility of managing the auditors of public business. The PCAOB is a private-sector, non-profit corporation. It was established to “protect the interests of investors and even more the general public interests in the preparation of informative, reasonable, and independent audit reports”....