In the writings “A Description of New England” by John Smith and “Of Plymouth Plantation” by William Bradford, the tone of these two selections vary noticeably. Both authors use certain tones to attract and persuade certain audiences. John Smith wrote of what a wonderful place the New World was, while on the other hand Bradford wrote about the difficulties and realities of the New World. Author John Smith, a pilgrim who arrived in the Americas, writes a description of the new land.

Don't use plagiarized sources. Get your custom essay on
“ Compare and contrast paper about two short stories ”
Get custom paper
NEW! smart matching with writer

In “A Description of New England” he shows what a wonderful world of vast food and pleasure await. William Bradford, another pilgrim who arrived in Plymouth on the coast of Massachusetts, gives his take on the early settling of the new land. In “Of Plymouth Plantation” he writes a description of what really happened their, how the pilgrims actually lived.

In “A Description of New England,” Smith starts by describing the pleasure and content that risking your life for getting your own piece of land brings to men.

He also implies that building your own house, planting your own crops, and having a “God’s blessing industry” would be easy to have without having any prejudice. He talks about the joy of erecting towns and then populating them. John Smith rarely mentions the Native Americans, but when he does he says that they are good people and that they helped them when the arrived. Smith also makes references to ways of profiting from daily activities such as hunting and farming.

This is his way of persuading others to make a voyage to the New World. For example, John Smith states “For hunting … afford not only chase sufficient for any delight that in that kind of toil or pleasure but such beasts to hunt that besides the delicacy of their bodies for food, and their skins are so rich as may well recompense thy daily labor with a captains pay. By persuading others to come to the New World, it can also be seen that Smith expects to profit from these new settlers. John Smith appears to be directing his writing towards certain financial individuals wanting to invest in the new colonies.

In “Of Plymouth Plantation,” Bradford begins by reminding us how harsh and difficult the trip to the New World was for the pilgrims. He writes about the condition of the men who arrived to the shore. He also mentions that in the New World there was no one to welcome them, more over there was nothing to stay in, no houses and no inns. When William Bradford mentions the Native Americans, he says that they greeted them with arrows. Bradford also attempts to persuade others to visit the New World, with a religious approach. This attempt is made even though he does describe the difficulties in the New World. In Bradford’s eyes, had not the Puritan Pilgrims been graced by God then their long and demanding exploration, all would have been in vain.

Year after year Bradford keeps sight of the signs from God meant to help the Pilgrims of Plymouth, Massachusetts. After years in the New World, Bradford talks of Squanto, the Indian, becoming “an instrument sent form God for their good. Then he goes onto compare the Pilgrim’s journey to the New World with the Israelites exodus from Egypt. It is clear to see that these religious references are used to persuade his audience to see the purity of the Pilgrim’s journey to Plymouth. William Bradford appears to be writing towards certain religious individuals who want to make a pilgrimage toe the new colonies.

Even though the tones of these two writings, “A Description of New England” by John Smith and “Of Plymouth Plantation” by William Bradford, vary distinctly, both authors attempt to persuade certain audiences. Smith attempts to persuade the financial advisors who wish to invest in the New World, while Bradford attempts to persuade the religious individuals to make a pilgrimage to the New World. Bradford wrote about the difficulties and realities of the New World, while Smith wrote about how wonderful the New World was. Pilgrim John Smith wrote a description of the new land in which he describes what an astonishing world of vast food and pleasure awaited others. Another Pilgrim, William Bradford, gave a different description of the new land. He gave a description of what really happened, of how the pilgrims really lived. 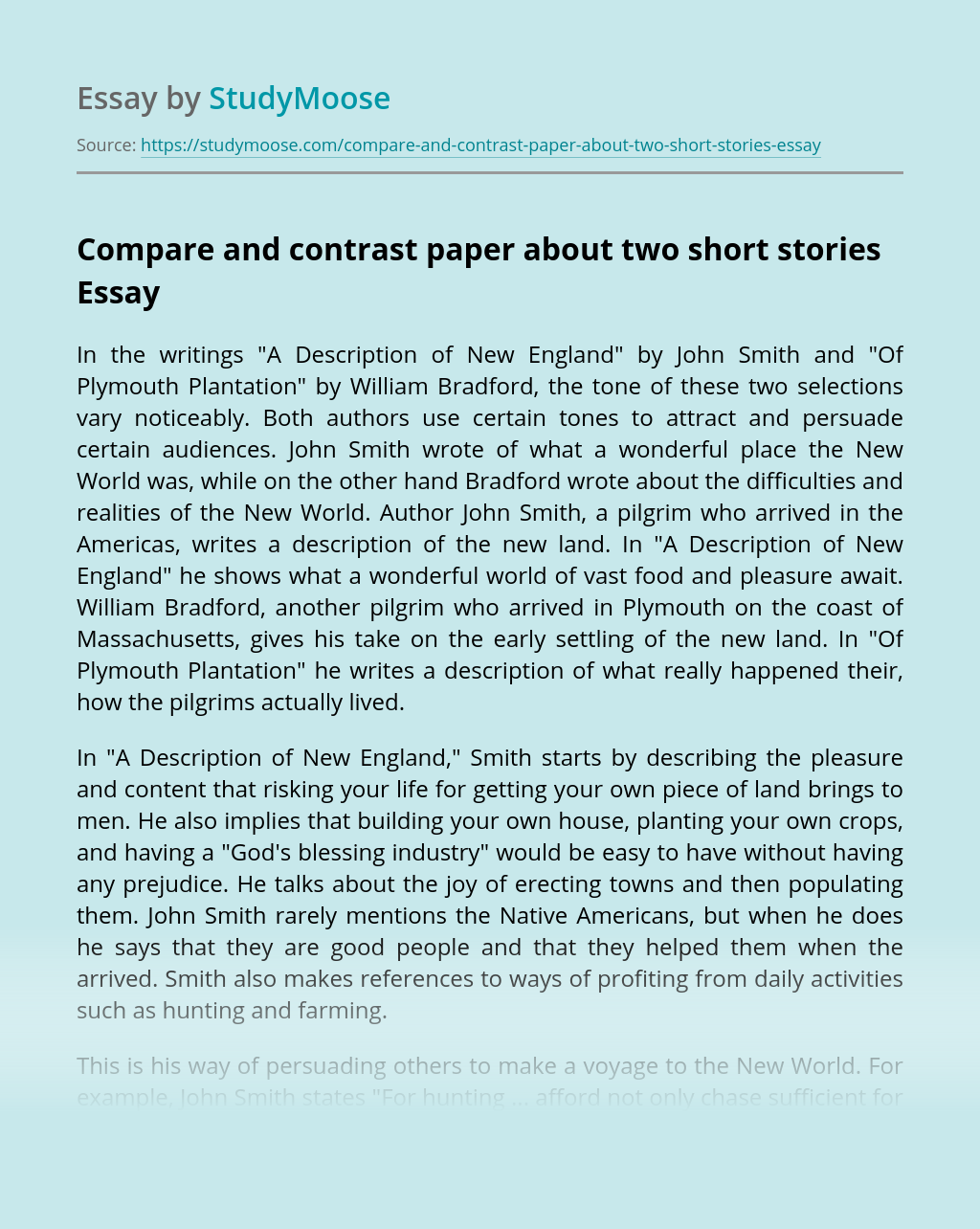