For the past five thousand years, human civilizations have existed on the earth and constantly reforming and contributing to our society. The excellences human made are unprecedented, and the experience theses civilizations cumulated can also be continuously studied by the people nowadays.

Don't use plagiarized sources. Get your custom essay on
“ Compare and Contrast of Agriculture Technology Between hang Dynasty and Han Dynasty ”
Get custom paper
NEW! smart matching with writer

Agriculture is a very significant part of a civilization. Without agriculture, making progress is impossible.

Agriculture is the foundation of everything. Agriculture is a good reflection of science and technology in a civilization. During the comparing and contrasting of the agriculture of Shang dynasty and Han dynasty, we can get a deeper understanding of the great knowledge and intelligent of the people of the two dynasties.

We can also discover the development and progress they have made. The Shang dynasty is the second dynasty in Chinese history. The Shang Dynasty last from 1600 B. C. to 1046 B. C. and experienced three big stages.

From the research of a large number of archaeological material and oracle records, archaeologists concluded that the Shang dynasty is operating mostly on agriculture.

However, at that time, there were no enough sources of cooper metal compared with sources of stone tools; also, the process of making bronze tools is complicated. As the result, in the middle period of Shang dynasty, bronze tools were not widely used. Also, most of the bronze tools were under the control of agricultural officers. Civilians and slaves cannot have these bronze tools. They can only use the heavy farm tools like stone spade, axes. Then, at the late period of the Shang dynasty, this problem got solved because of the expansion of the production scale.

At the same time, the appearance of irrigation technology and the strict management also helped to make the development of the agriculture in the Shang dynasty. As the main production department during the Shang dynasty, the developed agricultural technology provided the society with lots of food, in this way, a large number of people leave the career of agricultural production and began to work in other aspects for example business people, officers, soldiers, professional producers and so on. The government of Han dynasty put lots of effort on the restore and development of agricultural.

Han dynasty began after the perish of Qin dynasty. At the beginning of the Han dynasty, because of the long period of wars occur during the late period of the Qin dynasty, the agricultural and economy paralyzed. The people died in the wars are mostly farmers, as a result, the labor decrease and there‘s not enough people to take care of the cropland. At that time, the total population went straight down from 20 million to 8 million. Emperor Gaozu of Han solved these problems and agriculture of Han dynasty restored and developed very quickly.

There were lots of innovations and invention of agriculture during the Han dynasty. These achievements can be divided into three aspects. Firstly, there are huge developments towards the irrigation. Secondly, there are improvements of agricultural tools and technology. The third one is the cultivation of crops and vegetables. At the beginning of the Han dynasty, there are flood from upstream the Yellow River every year. It is a big hazard to the residents who lived in the downstream of the Yellow River. Their croplands got destroyed and some of them lost their houses.

Emperor Wudi of Han lead his people solved this problem. Thirty thousand people work together to remove the siltation of the river and planted trees on the upstream of the river. After this recuperation, there was no big flood occurred in the Yellow River. There are lots of interesting and useful inventions during the Han dynasty. Above is agriculture equipment called Libi. Libi is a plow equipped with a double moldboard. People put Libi on a plough can turns up the soil on each side of the furrow. With the Libi, the efficiency of cultivation increase. The application of Libi is a big improvement in agriculture.

Also, it is nearly 1000 years earlier than Europe of using the similar thing. Above is another invention which is called Lou. It is an animal- drawn seed plough. It has three feed. With Lou, people can do cultivation job three rows at a time. Lou can do three tasks: opening ditches, sowing, covering with soil at one time. Lou made farmers during the Han dynasty save much times and did more works. Lou increased the efficiency of the busy working farmers. The popularization of cultivation works with cattle would be another development on agriculture during the Han Dynasty.

During the Han dynasty, people already has variety chooses of vegetables including the vegetables we usually eat now like celeries, carrot, taro, green onion, garlic and so on. The most amazing thing is that during Han dynasty, people already learnt to grow vegetables in the greenhouse. During the eastern Han period, there were over 20 kinds of vegetables grew in the greenhouse. The use of greenhouse is one thousand years earlier than Europe. The biggest difference of agriculture between Shang Dynasty and Han Dynasty is the mode of production.

Shang dynasty is a slavery society, slaves worked collectively. Also, During Shang dynasty, the croplands were all belonged to the emperor of Shang, and he put the land law of serf society into practice. As the image show above, at that time, the roads and channel crisscross and partitioned the cropland into squares. The emperor of Shang forced people work on the cropland. The outside parts are private fields and the inside part is public field. On the opposite, during the Han dynasty, people live and cultivation in the unit of a family. People have their own croplands.

This kind of mode of production was usually described as small-scale farming by individual owners. Nowadays, in the remote mountain area or countryside, people are still using this kind of mode of production. A question may come out, why the first kind of production mode didn’t last long and in the contrary the second kind of production mode last till today. In my opinion, in the Shang dynasty’s example, people don’t have their own croplands. They work hard but the wheat and rice that come out of the croplands did not belongs to them, so they are not satisfy with the works they are doing.

In contrast, with the second kind of mode of production, people are glad because if they put more effort, they will get more payback, so they are satisfy with their works and willing to do better. From the analyzing of the agriculture technology and development of Shang dynasty and Han dynasty, we can certainly conclude that the development in agriculture of both dynasties are significant and they both show their incredible intelligence to us. Their inventions and new ideas gave us inspirations. We can also see the huge improvement from Shang dynasty to Han dynasty in the 800 years. Their progresses are starling.

Compare and Contrast of Agriculture Technology Between hang Dynasty and Han Dynasty. (2018, Oct 07). Retrieved from https://studymoose.com/compare-and-contrast-of-agriculture-technology-between-hang-dynasty-and-han-dynasty-essay 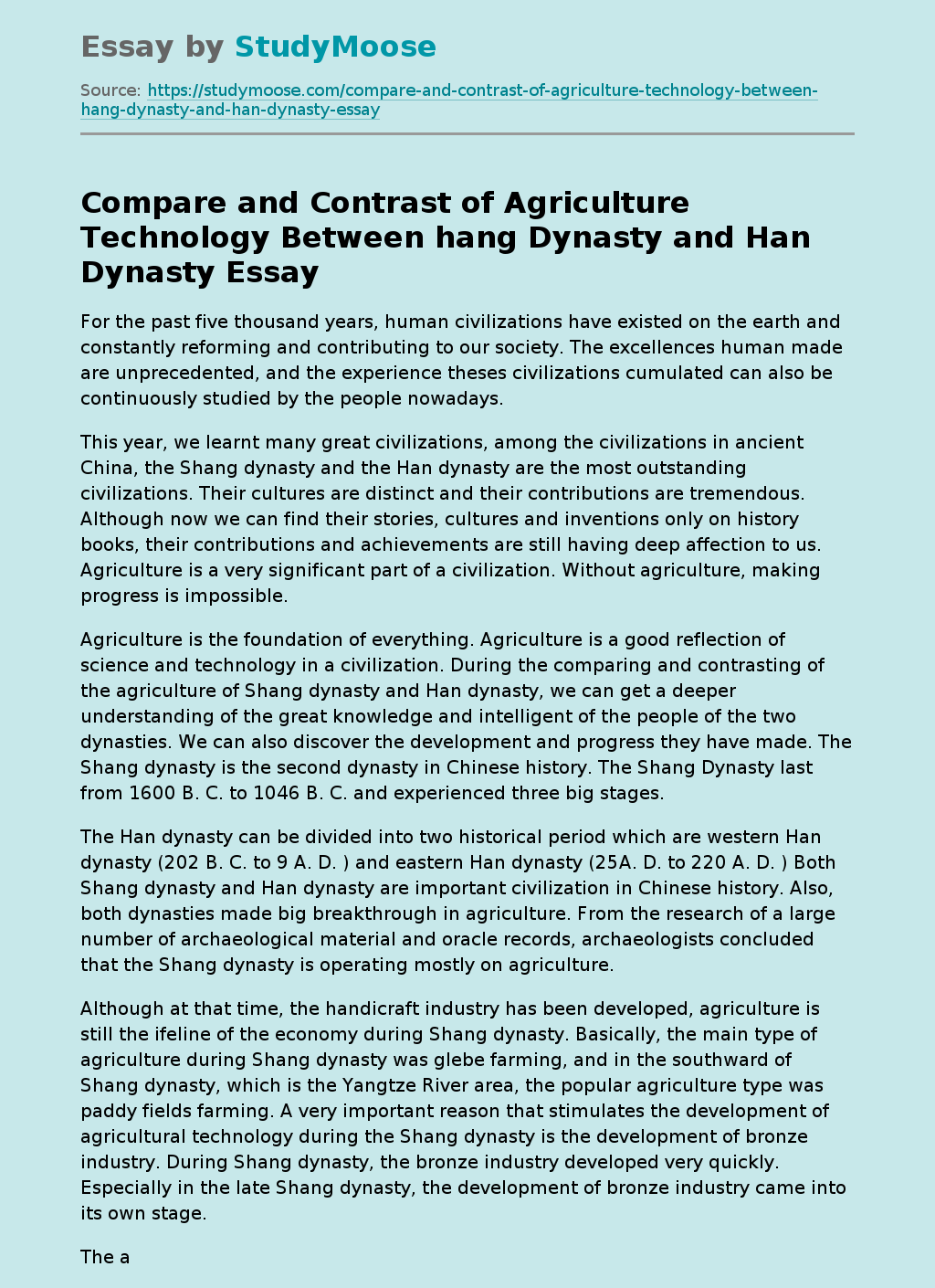