Compare and contrast essay "traveling through the dark" and "woodchuck"

“Traveling through the Dark” by William E. Stanford and “Woodchucks” by Maxine Kumin a man must make the choice of nature and its ways. Both poems have their similarities and differences. Traveling through the dark and woodchucks share various ways of similarities, Man vs Nature Death situations are involved in both poems. Through the use of narrations both poems have different attitudes.

Traveling through the dark starts off dark and progress towards a more serious tone and, the reader sympathizes with the main action in getting the dead deer off the road.

Don't use plagiarized sources. Get your custom essay on
“ Compare and contrast essay “traveling through the dark” and “woodchuck” ”
Get custom paper
NEW! smart matching with writer

So he can prevent future deaths. Both poems use strong verbs to communicate the point effectively as possible. Traveling through the dark has no rhyme scheme and follows contemplative tone, that comes from the decision of life and death which sets the mood of the poem: sadness and despair. Kumin uses “ beheaded” and “hooked” to illustrate the images to she wants to communicate.

In Woodchuck, Maxine talks about the violence in killing the woodchuck and actually shows the reader the killing and violence whereas the Traveling through the dark illustrates a human reaction to the less-violent act.

The poem however does have a rhyme scheme but does not conform to conventional forms of rhyme. The first stanza happens when the speaker describing their failed attempt to eliminate the pest. Following through the poem a sense of humor becomes between the writer and the woodchucks.

Each poem has a violent, grim, painful and guilty tone to it, maybe some or less in others.

while reading “traveling through the dark” the doe’s death and the inescapable fate of the baby fawn brings on a feeling of guilt, more so that the poem of the “woodchucks”, also in the contrast the “woodchucks poem emphasizes on violence more than its partner. Throughout the story the narrator is blood thirsty and cares only about the death of woodchucks but does not relate to what is actually happening around the time or what was happening around him the nazi period. The death of each animal leaves the reader feeling sad and hopeless. In comparison, Kumin only focuses on the man’s reaction to the the woodchucks “beheading the carrots”, traveling through the dark is more objective as compared to the woodchucks which is more emotional although they are both almost equal effective.

Compare and contrast essay "traveling through the dark" and "woodchuck". (2016, Apr 22). Retrieved from https://studymoose.com/compare-and-contrast-essay-traveling-through-the-dark-and-woodchuck-essay 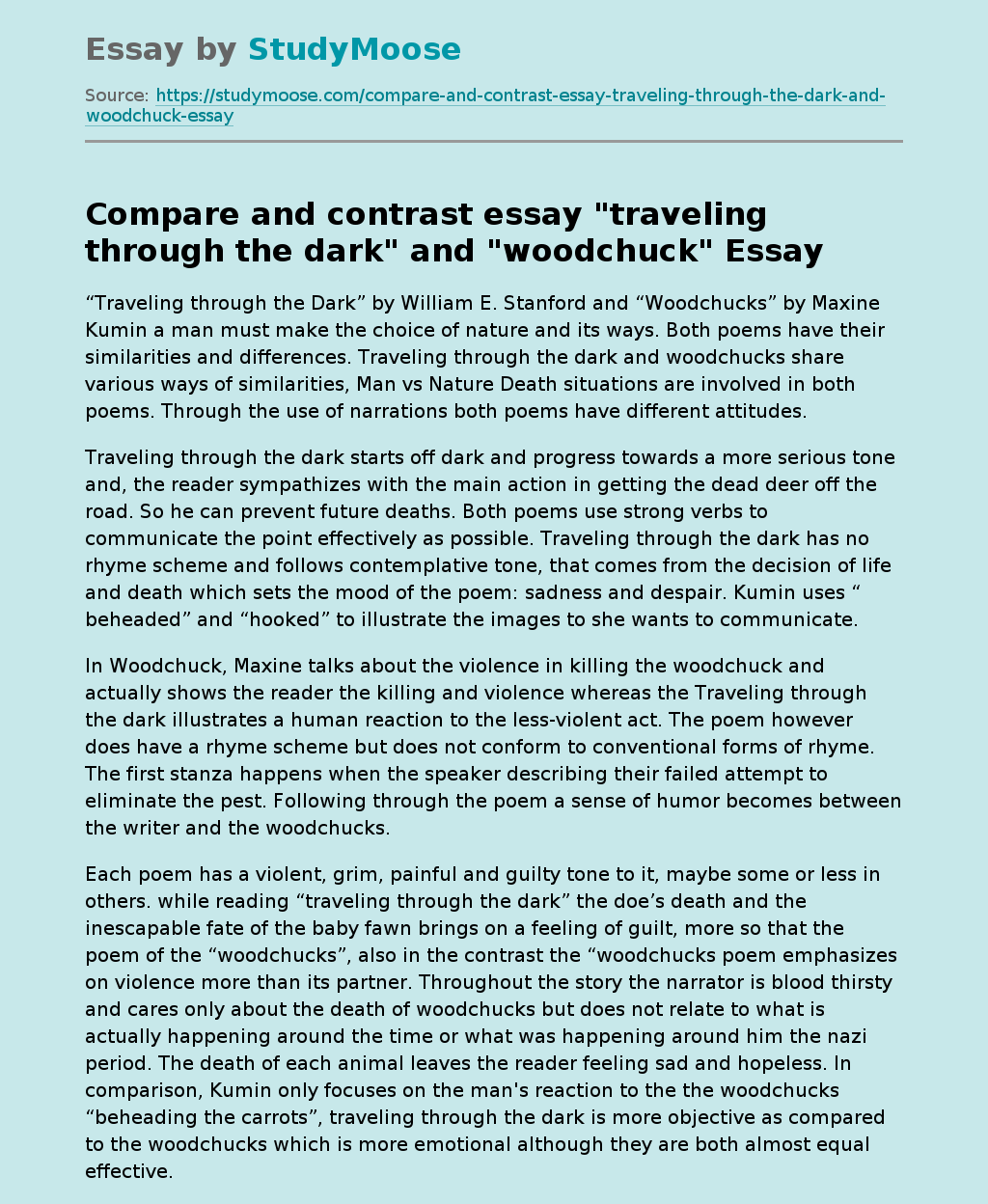