Compare and Contrast Essay: The Play Antigone and Harry Potter and the Prisoner of Azkaban

The play Antigone and Harry Potter and the Prisoner of Azkaban are similar because, the characters in each have similar characteristics. They both have the same themes of revenge, social justice, and redemption. The similarities between these two show that Greek literature is still relevant in today’s world. The play Antigone is about Oedipus’ two sons both dying in battle, and one is given a proper burial and the other is left out in a field to be untouched by anyone.

Don't use plagiarized sources. Get your custom essay on
“ Compare and Contrast Essay: The Play Antigone and Harry Potter and the Prisoner of Azkaban ”
Get custom paper
NEW! smart matching with writer

If anyone tries to bury him they will be punished by Creon.

Antigone felt that her brother deserved to be buried and was going to take care of it herself, even if she would be punished for it. When Creon got news of Antigone’s actions he couldn’t believe his sons soon to be wife would do such a thing but he knew he needed to follow through on his word and punished her to death. People in the city did not agree with Creon’s decision to kill Antigone, so he decided to have her locked in a cave to suffer.

There in the cave Antigone hung herself, when Creons son went out to find Antigone and found her dead he then killed himself.

Creon decided that locking Antigone in a cave was also not the right thing to do so he sent out to get her, But they were too late and found them both dead. When Creon’s wife got news of her son’s death she too killed herself.

The Play Antigone and the movie Harry Potter and the Prisoner of Azkaban both have themes of revenge in them. In the movie Harry Potter’s parents died when he was a baby, in the beginning of the movie Harry learns that Sirius has been in jail for the last twelve years because he was involved in helping with the killing of his parents. Harry is furious about this and wants Sirius dead or back in prison, when Harry finds Sirius he soon learns that Sirius had nothing to do with the death of Harry’s parents and that the person that did is still out there disguising himself as a rat.

Harry and Sirius Find this rat named Peter Pedinger and have him killed for helping with the killing of Harry Potters parents and for making it look Like Sirius did it so he would be the one to go to prison. In the play Antigone revenge is shown through the deaths of Creon’s wife, son, and his sons soon to be wife. Creon is told that what he has done to Antigone is wrong and that bad things will happen to him if he doesn’t do something about it right away. Creon ignores this advice at first but then realizes he was wrong and goes out to get Antigone himself.

When he arrives to the cave he is to late both Antigone and his son have killed himself. Soon after finding them in the cave Creon learns that his wife too has killed herself. If Creon would have done the right thing right away his family would still be alive. Characters that are alike between the play and the movie share many characteristics. Harry Potter is most like Antigone, they both like to do things they are told not to do, even if no one believes what they are doing is the right thing. They both would do anything for their family.

Ronald Weasley is a lot like Antigones sister in the play, he never agrees with what Harry is about to do but in the end he always has Harry’s back. The character in the movie most like the chorus in the play would be professor Lupin. Lupin is most like a chorus because, throughout the movie he tells Harry of events in the past that lead up to the events in the movie, he also prepares Harry for what’s going to happen to him next. Without professor Lupin in the movie no one would understand why Sirius Black escaped from Azkaban and why he is looking for Harry.

In the movie Dumbledore is most like the Gods in Greek literature. He runs the school and he always has a solution for everything. He makes sure that those who do good are rewarded and those who do bad are punished. In the movie Sirius has been found and is sentenced to death, Dumbledore knows Sirius is innocent and gives Harry the tools to go back in time and change the events that happened to save Sirius. This movie is about a wizard and his journeys as he goes to school at Hogwarts, but more importantly it shows that anyone can do the right thing, and two the struggles one would go through for their friends or family.

A lot like the story of Antigone. She knew she would get in trouble if she tried to bury her brother but she didn’t care he was family and he deserved to be laid to rest, and Creon who swore as a king to sticking to his words, found that punishing Antigone was wrong and went to set her free. I always thought Greek literature was boring and useless, But this assignment let me see how much Greek literature has had an impact on today’s world. Almost every movie or book today has themes of love, hate, or revenge in them and those ideas first started in Greek literature.

Compare and Contrast Essay: The Play Antigone and Harry Potter and the Prisoner of Azkaban. (2016, Sep 08). Retrieved from https://studymoose.com/compare-and-contrast-essay-the-play-antigone-and-harry-potter-and-the-prisoner-of-azkaban-essay 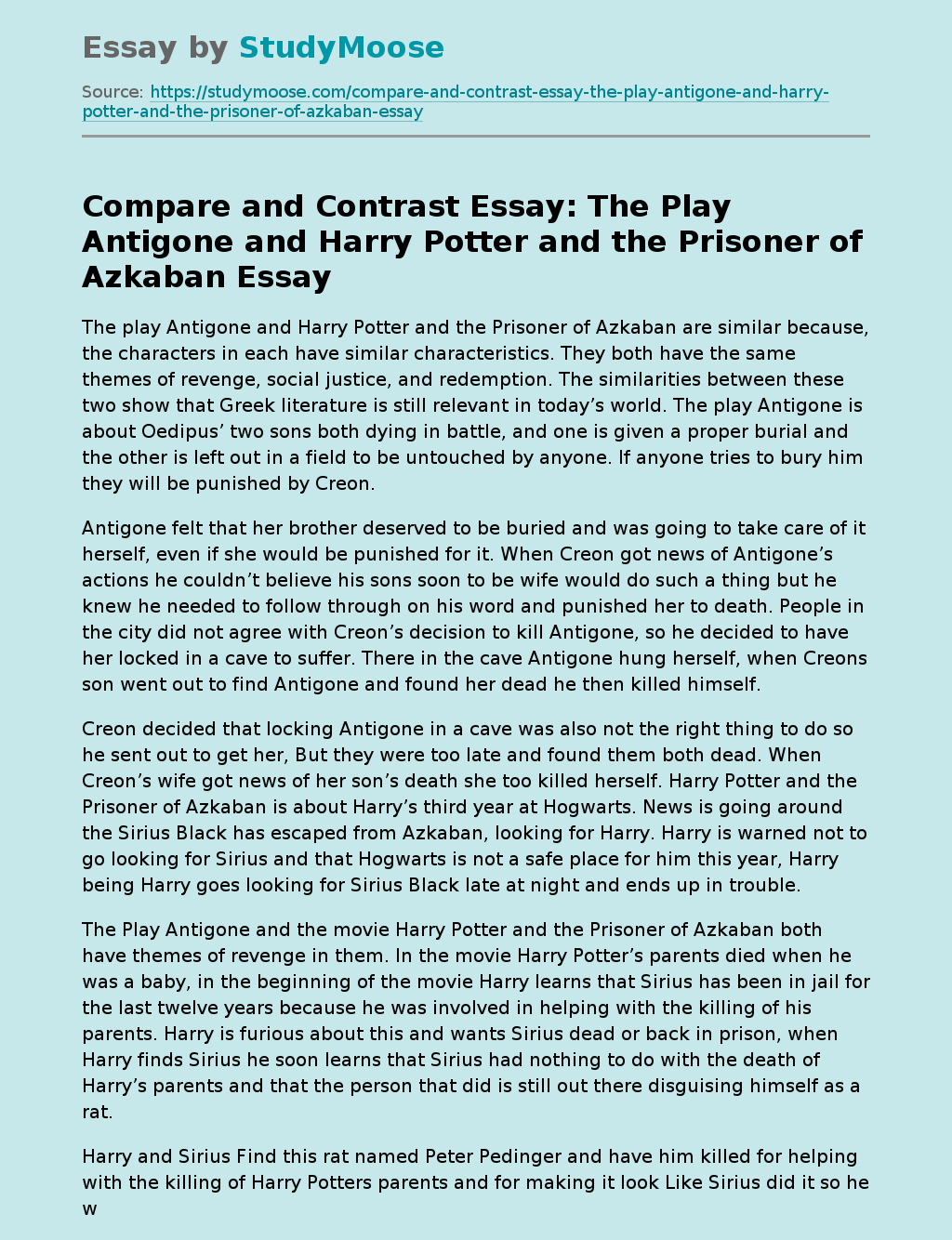