Compare and Contrast: Death of a Salesman & Oedipus

Separated by almost 3000 years of literature, two plays can still contain similar elements and characteristics that tie the two together. This is the case between the two plays, Oedipus The King and its counterpart Death of a Salesman, one written approximately 430 BC and the other written in 1949. When first reading this book, one might question, what could these stories possibly have in common; one is about a king who discovers he has killed his father and copulated with his mother and the other about a salesman with suicidal tendencies and unattainable dreams.

Don’t waste time
Get a verified writer to help you with Compare and Contrast: Death of a Salesman & Oedipus
Hire verified writer
$35.80 for a 2-page paper

As the reader further analysis the story, the underlying similarities become more apparent even as one might say that there are no relations between the two stories. Looking into the main protagonist of both plays, we realize that they are strikingly similar in aspects related to their prideful personality, demeanor, and temperament, all quite evident in the way they handle their personal conflicts which leads to their eventual downfalls.

Analyzing these characters their shared traits become quite obvious to the reader.

Divulging the two plays, we are faced with these two characters with strikingly similar personalities. Both prideful men, this trait becomes quite apparent when addressing other of their own merits. In the very beginning of the play Oedipus the King, Oedipus is addressing the conditions of the people and instead of really addressing the issues of the plague Oedipus uses it as an excuse to praise himself further saying , “Here I am myself- you all know me, the world knows my fame; I am Oedipus” ( Sophocles 1156: 6-8).

His words of bravado show his prideful personality, that he is above all and that he is known by all even as far to say “the world knows [his] fame (1156: 7). As the play moves further along, his pride becomes more and more evident when Tiresias the blind prophet has named him the corruption and curse of the land. He shrugs it off and denies it with false confidence responding to her saying “you can’t hurt me or anyone else who sees the light- you can never touch me (1167: 427-428). The delivery and way Oedipus says this statement is said with a hurt pride covered up by false confidence. In the same way, Willy, the main protagonist of Death of a Salesman, is a quite prideful man who covers up his own short comings with grandeur delusions and false confidence in himself.

In one instance, speaking to his boys, giving them advice on how to succeed: WILLY: Because the man who makes an appearance in the business world, the man who creates personal interest, is the man who gets ahead. Be liked and you will never want. You take me, for instance. I never have to wait in line to see a buyer. “Willy Loman is here!” That’s all they have to know, and I go right through! ( Death of a Salesman 1435. Act I) Willy gives seemingly sound advice but he also takes it as an opportunity to puff out his chest in bravado and say that he himself is well liked by everyone “never hav[ing] to wait in line to see a buyer” (1435. Act I) . This is all for show, priding himself as a man who has succeeded in the world of business, in truth it is nothing more there mere false confidence. When addressing his wife about his trips up north to New England and his sales he contradicts himself when he say that he is “very well liked in Hartford… the trouble is… people don’t seem to take to me” (1437. Act I). All this false confidence and pride comes to light when he makes such statements even though he knows otherwise. Both Oedipus and Willy have this prideful personality that allows the play to propel of it, eventually leading to their own self demise in one way or another.

Referencing to their own self demise, the eventual paths they choose leads to the outcomes of how the stories end up. How this goes about is how they decide their own fates, choosing to deal with situations in the wrong ways or all together ignoring others all together in beliefs that they are in the right. In the story Death of a Salesman, Willy is confronted with financial issues which become apparent when he and Linda are discussing the month’s payments in which he owes a “hundred and twenty dollars! If [his] business [doesn’t] pick up [he won’t] know what [he’s] gonna do” (1436 Act I). This problem could have simply been remedied when his neighbor had come for a visit:

CHARLEY: You want a job?

WILLY: I got a job, I told you that. (After a slight pause). What the hell are you offering me a job for?
CHARLEY: Don’t get insulted.
WILLY: Don’t insult me. (1440 Act I)
The way he handled the situation was poor at best, and he had done so in a prideful manner as though his dignity was being attacked. Instead he could have simply looked into the possible venture which would have helped with monetary issues at home. These monetary issues attributed to his eventual suicide later on in the play. It becomes apparent that Willy deals with such situations with anger, a hint of anger and as though he himself was being attacked. Oedipus deals with his incestuous problem with the same mannerisms. When he himself has been accused of causing the plague in the city by Tiresias the blind prophet, he denies fault instead saying that Creon has put her up to it in order to over through him in which he says to Creon himself “You-here? You have the gall to show your face before the palace gates? You, plotting to kill me, kill the king-I see it all, the marauding thief himself scheming to steal my crown and power” (Sophocles 1171: 594-598). Here we see him dealing with the situation poorly with angst, as though he himself was being attacked.. Instead of tackling with the issue head on, he prefers to avoid the blame and instead play the victim. The two protagonist of both plays, confront their own problems with anger, and a feeling as though they themselves were under fire, that they were being criticized. These lead to their eventual downfall as the plays slowly progress onwards fueled by their own decisions and mannerisms.

Tying all these elements together the two main protagonist become the major point of most of the similarities between Oedipus the King and Death of a Salesman. Their behavior and personality reflect that of prideful man who hides behind false bravados and confidence in attempts to avoid their problems. Their attempts to avoid the problem lie in the way they handle situations with anger and a feeling as though they were under criticism. All this brings the plays to a full circle, having the two main protagonists bring about their own self destruction.

Compare and Contrast: Death of a Salesman & Oedipus. (2016, Mar 08). Retrieved from http://studymoose.com/compare-and-contrast-death-of-a-salesman-oedipus-essay 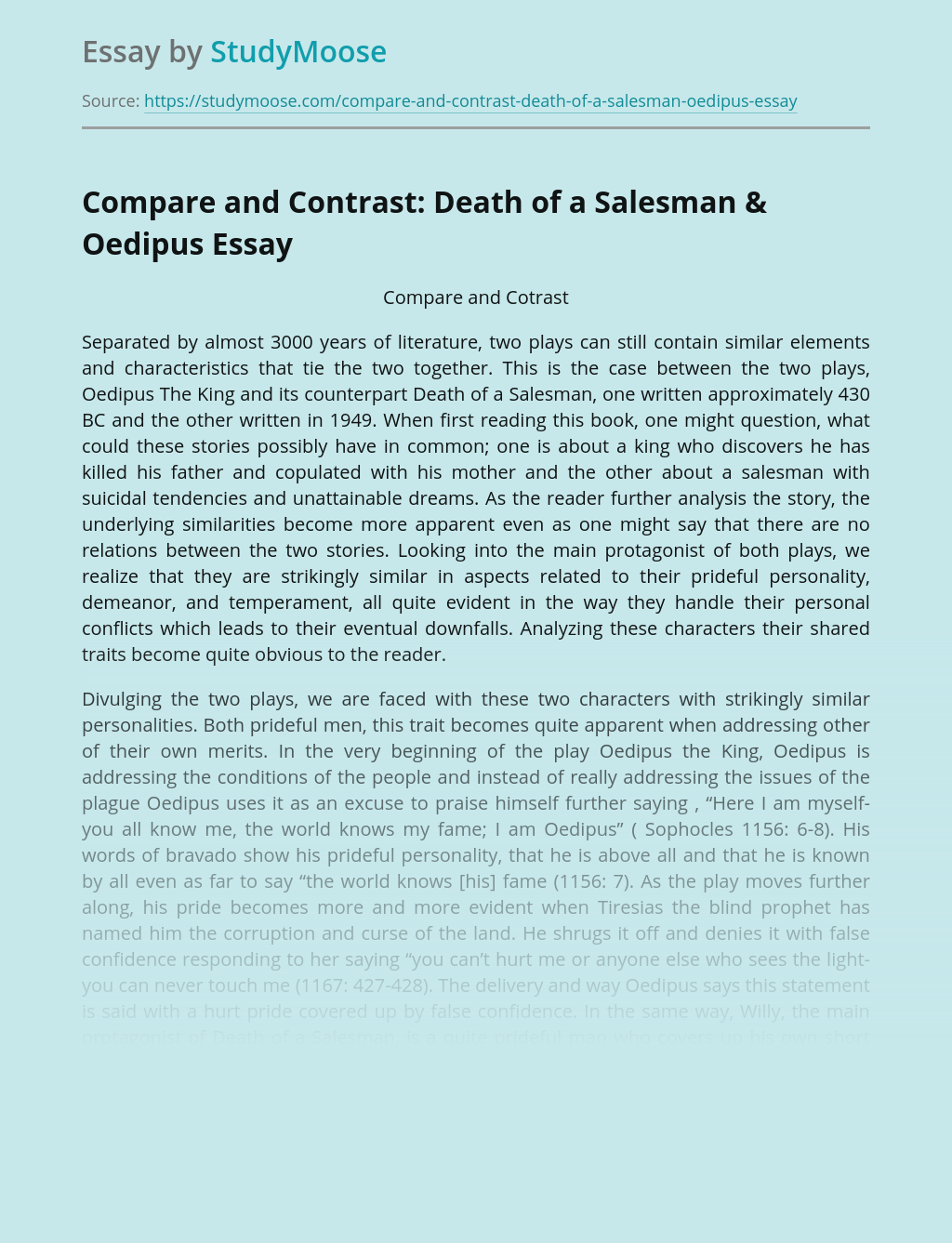 Don’t waste time
Get a verified writer to help you with Compare and Contrast: Death of a Salesman & Oedipus
Hire verified writer
$35.80 for a 2-page paper
Stay Safe, Stay Original