In the movie and poem Beowulf there were many differences and similarities that stood out to me. Usually when a book or poem gets made into a movie there are many differences and similarities. This is why I was not surprised that Beowulf the movie was no true to the original poem. I enjoyed the poem a lot more than the movie. The movie seemed artificial and not believable in comparison to the poem. One difference between the poem and the movie was that the poem explained the actual story of Beowulf and his journey in much more detail.

On the other hand it was interesting to be able to visually see the poem come to life as it is always easier for my interest to be held when I am watching something instead of reading it. In the hi-tech world we live in visual information may help many people to better focus. The movie portrayed Beowulf cut off his arm so he could kill the dragon and also showed him ripping the dragon’s heart out.

He died when he fell off the cliff with the dragon.

This made it extraordinarily different than the poem, where Beowulf just slayed the dragon without the extra dramatics. Beowulf is considered a heroic figure in the poem because he protected the Danes from the beasts and in the movie he is portrayed more as a liar than a hero. For example he lies about the dragon being his son and having an affair with Grendel’s mother.

This was never mentioned in the poem. In the movie, Hrothgar is accused of cheating on Welthow with Grendel’s mother and giving birth to Grendel.

In the movie when Beowulf came to protect the country of the Danes he is mesmerized by Grendel’s mother’s beauty however the poem makes no mention of this. Historically women had no power compared to men and this is why there is very little mention of the queen in the poem. In the movie the queen is a central figure who has much power. Given the times having the queen described as such an important figure is completely inaccurate.

In the movie Hrothgar commits suicide which was completely different than in the poem. How does hrothgar die? In the movie, Beowulf is the dragon’s father and Hrothgar is Grendels father. This association was never described in the poem. The movie leads us to believe that Hrothgar cheated on Welthow and had a controversial relationship with Grendel’s mother and gave birth to Grendel. In the poem, Beowulf killed Grendel’s mother when he dove into the water and killed her with a sword. Similarities between the poem and the movie include when Grendel dies when Beowulf cuts off his head and his arm and mounts the arm on the wall. 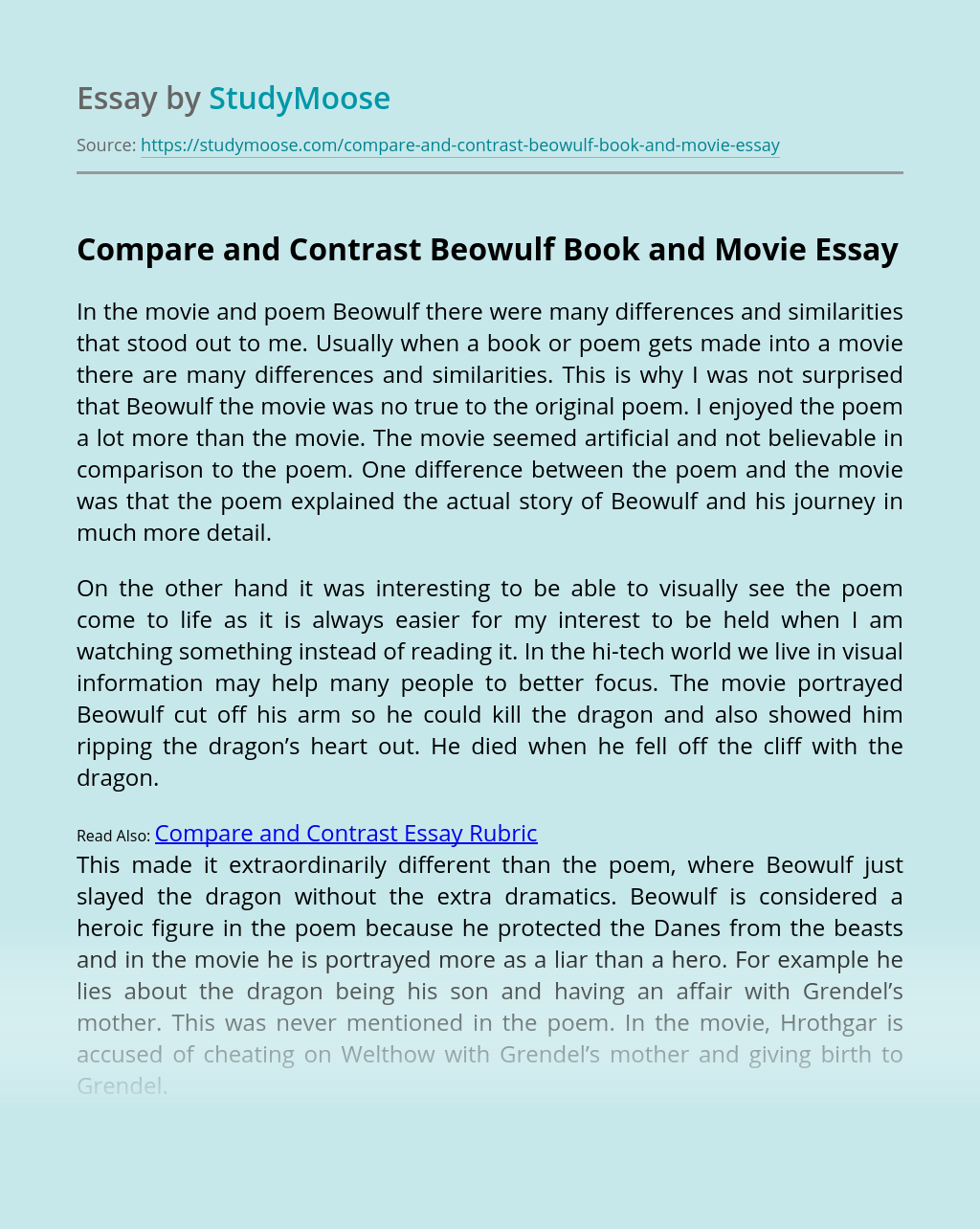 Don’t waste time
Get a verified writer to help you with Compare and Contrast Beowulf Book and Movie
Hire verified writer
$35.80 for a 2-page paper
Stay Safe, Stay Original