Arabic has received much attention since the field of contrastive rhetoric was established, mainly with Kaplan’s work (1966). It was among the languages that Kaplan included in his 600 essay analysis of foreign language students at the USA. Kaplan made a conclusion about Arabic that it is based on a complex series of parallel constructions, both positive and negative (p, 17). He linked to failure of Arab ESL learners to the patterns of parallelism which he divided into four types: synonymous, synthetic, antithetic, and climatic.

Don't use plagiarized sources. Get your custom essay on
“ Compare And Contrast Arabic and English Rhetoric ”
Get custom paper
NEW! smart matching with writer

Other remarkable research on Arabic was made by Ostler who continued Kaplan’s work. He stated that Arabic essays reflect the forms found in classical Arabic when she compared and contrasted Arabic and English rhetoric. According to her English developed from coordination and parallelism and to deletion and subordination. For her, English languages benefited from the social development of the 20th century mainly printing press and literacy. Unlike Arabic which did not witness any development at the level of structure.

As it still uses parallelism and coordination because it strives for balance which was fulfilled by them. The analyzed essays in Ostler’s work contained more sentences as opposed to English ones. She justified this by the close relationship between classical Arabic and Holy Quran which makes of it a divine oral text.

Consequently, this prevents them from developing literate characteristics of their L1 writing. Harfmann (2004) had almost the same remarks as he compared twenty school essays of Arabic to those of German. He concluded that Arabic use coordination, repetition, parallelism to achieve cohesion and appeal to reader’s attention.

According to him, these were oral traits; therefore, Arab essays had a stronger tendency towards the written mode than German essays. Smith (2005) compared Arabic and Chinese students’ rhetorical choices in a study he carried out. His study examined the affect of the context on their writings, which were letters addressed to a native and nonnative professors. The results of this study revealed that Arab writers tend to use forms of solidarity’ when writing (for example, the use of we, us, our’ etc). Smith (2005, p90) added that besides the context, these Arab students’ writings reflected great religious influence. Such influence was in terms of reference to God each time throughout the piece of writing. He supported his argument with a quote of one if his participants

In Arabic, you can related everything back to God-in English you should not do that, but I Arabic you can d anything. The second line of research in contrastive rhetoric belongs to those done by Arabic linguists. It is widely remarked that most of contrastive studies in Arabic are a reaction and response to claims made by westerns about Arabic. These studies were in a form of defense in an angry tone towards the claims that Arabic is only about oral traits. Some of the works that mark this sort of studies are carried out by Saadeddin (1989), Shaikhulislami and Makhlouf (2000). They stated that westerns missed the point by linking oral traits to Holy Quran and Classical Arabic. They see that oral traits are used to achieve certain rhetorical purposes. As Saadeddin described the function of these structures as to signify closeness and intimacy with readers to communicate and transmit certain messages. Other Arab scholars took a neutral position in their studies, and attempted only to examine the Arab writing in comparison to other languages to justify the rhetorical choices.

Most of these studies examined the effect of context, culture and religion on Arabic rhetoric. Al-Khatib (2001; cited in Abu Rass, 2011) analyzed personal letters written in English by Arab students. It was stated that Arab writers include additional statements to ask about health, family, work and personal life in general, this is feature is absent in the English culture. Hence, personal letters written by Arab learners reflect culture specific’ choices. A related study was revealed out earlier by Feghali (1997) which supports Al-Khatib argument about the role of culture in Arabic rhetoric. Feghali (1997) made a contrastive study on Arabic and American writings, in which he remarked that there was situation centeredness’ in the Arabic writing.

An important feature that characterizes Arabic writings is the use of personal pronouns that reflect collectiveness such as; we’, our’, us’. Unlike for the American writers who reflect individualism’ and independency’. Al-Qahtani (2006) approached the Arabic contrastive rhetoric from an advanced level using CARS model (Swales, 1990). He examined the rhetorical structure of Arabic written texts. He compared Research Article Introductions written by Arab authors to those written by natives. The analysis of Arabic research article introductions showed additional statements which have nothing to do with the moves and steps mentioned in CARS model. Al-Qahtani (2006, p.78-79) classified these sentences into three types.

Abu Rass (2011) on his work made a similar remark concerning the religious impact on Arabic rhetoric. In his analysis he found out that such religious expressions appear at the top of letters. They generally represented in form of God thanking and reference such as; in the name of Allah’, God willing’ etc.4-2-Contrastive Rhetoric Studies in French 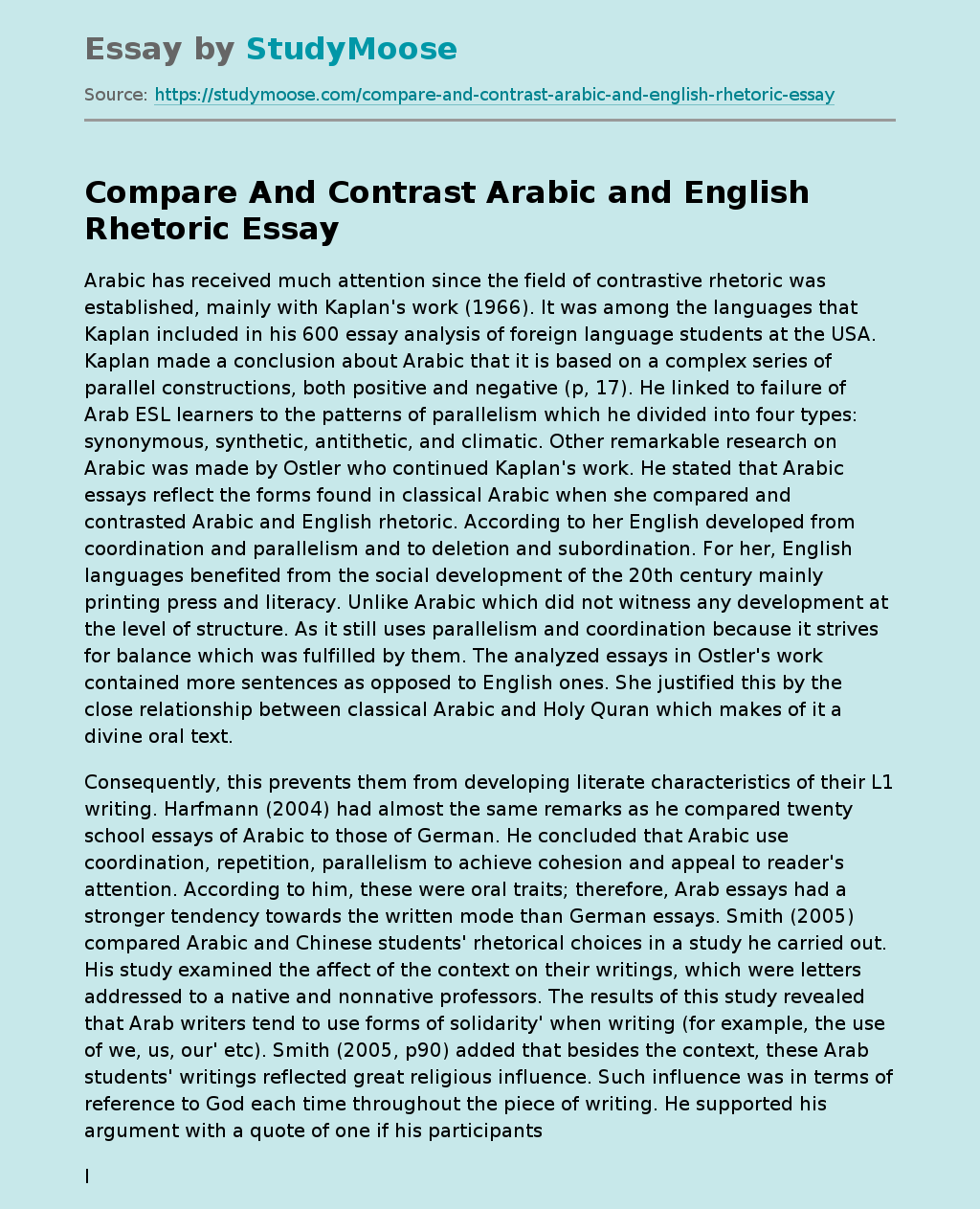