Compare and Contrast ancient India and Egypt combined politics and religion Through history, religion has shaped civilizations in several aspects. In ancient Indian and Egyptian civilizations it was very strong shaping force in political structures, but both the religious beliefs and the resulting political system were different, just like pharaohs were different from rajas. The way Egyptians and Indians blended religion with politics bears certain similarities. First of all, the central role of priests, who were the Egyptians pharaohs most important advisors during the New Kingdom and at one point gained more power than the pharaoh himself.

Don't use plagiarized sources. Get your custom essay on
“ Compare and Contrast Ancient India and Egypt Combined Politics and Religion ”
Get custom paper
NEW! smart matching with writer

In the other hand, in India priests or Brahmans were also important political figures since they were considered to be at the top of the caste system and comprised the most educated portion of society. Also, in both civilizations religion became a way to reinforce the government and lead voluntaries to work during the summers to build the famous Egyptian pyramids. In India, on the other hand, the caste system and the concept of dharma taught the lower classes what their place in society, and this place was subordinated to the upper classes and the government.

Despite the similarities the influence of religion in the political life of both ancient civilizations displays some differences. For example, the pharaoh was considered a divine ruler, making him a leading priest, while rajas were military figures and even after the rise of the caste system warriors confined with priests for power. Even Ashoka, the emperor of India who became a Buddhist monk, was not divine, eventhough his government gave Buddhism central importance.

Here, we can see yet another difference that started with the emergence of Buddhism and Jainism in India, while in India more than one religion (with Ashoka) while the Hindu caste system was still in practice, Egypt only had one central system of beliefs at a time. Even though the form of worship and the beliefs changed over time, only one religious system held power at a time, even during the short period during which the pharaoh became monotheistic with Akhenaton and the worship of Aton, only this system held political power even if the people still worship the old Gods.

Because of this, priests and nobles overthrew this religious system in Egypt and regained their power. Even though religion was an important part of the Indian political system, neither rajas nor later emperors established a theocracy, while the Egyptian pharaohs did. In Egypt the pharaohs were religious and political figures, in fact, during the New Kingdom they had no standing army, while Rajas were warriors and the authority of Indian emperors also derived from military power. This is due because Egyptian civilization was peaceful through most of its history, so religion, rather tan an army was used to justify the pharaohs rule.

In India, on the other hand, Indo-Aryan tribes spread through war, and the Indian empire was established by overthrowing the Macedonians through military conquest. So in both the positions of the Raja and the emperor were sustained by their ability to conquer and subdue others, even during the reign of Asoka diplomacy was used to expand the empires domains. As we can see, religion in India and Egypt became a factor of importance, but in clearly different ways and yielding different structures and interactions.

The religious and political structures of both ancient civilizations can be related to the Japanese mandate of heaven. This comparison can be made because in India and Egypt the leaders shared both religious and political authority; they were the supreme leaders in both aspects. In the mandate of Heaven Japanese political rulers, were supposed to be enlightened or chosen by God to rule the empire. In conclusion the three civilizations had rulers in which were evolve both political and religiously. 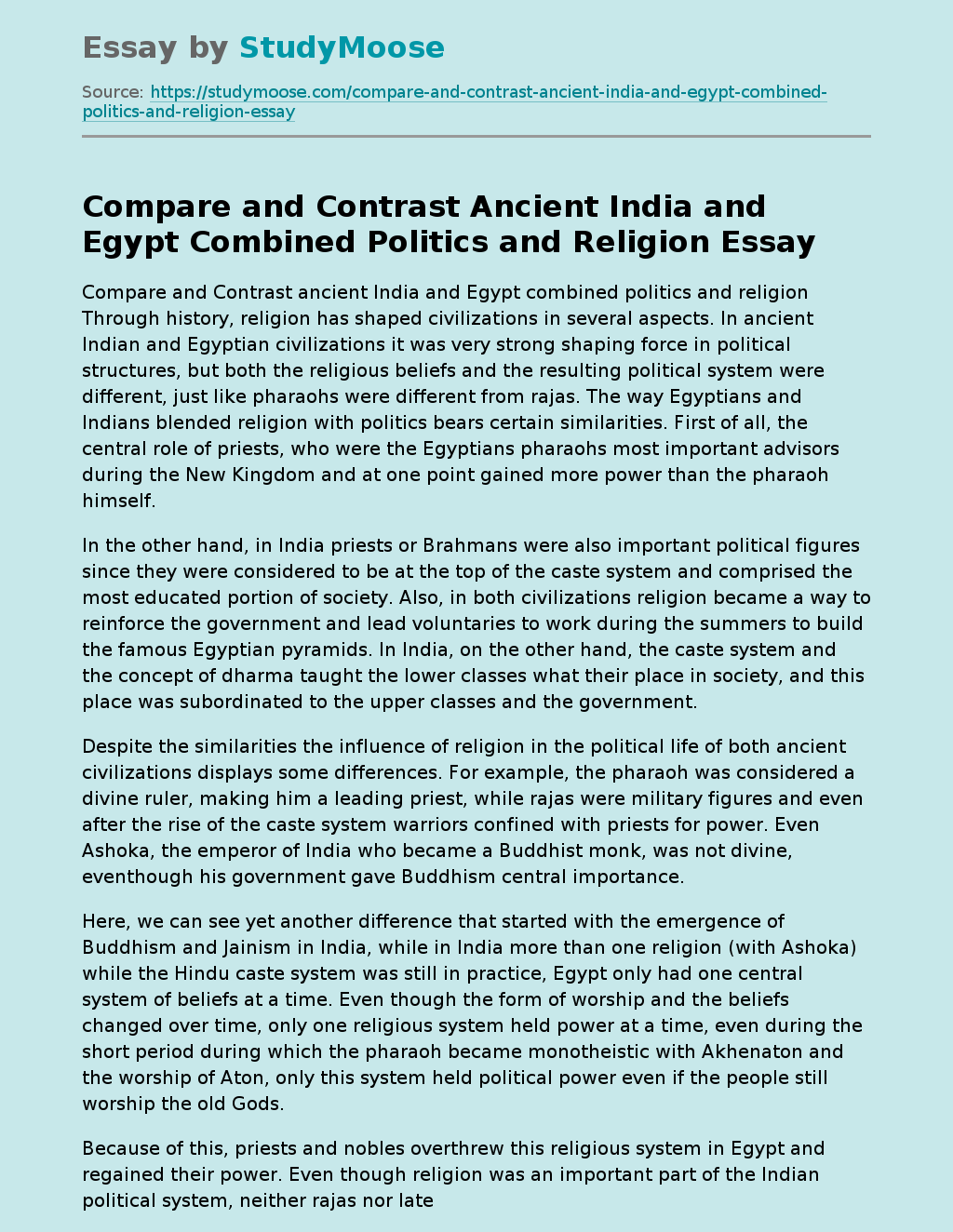