How Does Comparative Study of Frankenstein and Blade Runner Make the Issues Raised in Frankenstein Relevant to Modern Audience?

Frankenstein is a 19th century novel written by a romanticist, Mary Shelly. Frankenstein explores the main issues such as nature, relations, need for freedom, fear and artificial life. All these are reflected into the movie Blade Runner (1982) that reflects 20th century fears of cloning and advancement in technology, that views the aspects of all which is portrayed within Frankenstein.

These are relevant to the modern audience as regardless, living in the 21st century, the need for love, the advancement of sciences and artificial life, the nature still lives on and are expressed indicating the development of society’s understanding and knowledge from the 19th century to the 21st century.

Don't use plagiarized sources. Get your custom essay on
“ How Does Comparative Study of Frankenstein and Blade Runner Make the Issues Raised in Frankenstein Relevant to Modern Audience? ”
Get custom paper
NEW! smart matching with writer

Throughout Frankenstein nature is expressed as an emotional rollercoaster. Nature is a romantic environment, which can heal and restore humanity. Frankenstein is driven to create another species of his kind to boost his emotional being, making him feel like god. A new species would bless me as its creator and source; many happy and excellent natures would owe their being to me.

no father could claim gratitude of his child so completely as I should deserve theirs. As the creature is created, Frankenstein automatically feels a sense of regret of what he has created leading for Frankenstein to abandon his creature. The nature in this part of scene is very gloomy, the rain is pouring dismally, candle has nearly burned out and this sense of surrounding brings a cold environment to enclose in on Frankenstein.

All these characteristics reflect on the feeling, surrounding and emotions towards the creature and the nature of the setting reflecting on the event. Nature like what is expressed in Frankenstein is also similar to the expression of nature in Blade Runner in the style of Film noir. There is the absence of nature and the overtaking of artificial life.

The shadows and dark corridors within the movie connote an unclear morality, the foggy, crowded streets suggesting a civilization is upon collapse with an unclear vision ahead of what is to come next from the advancement in technology and degradation with the take over of orientalism race. Both these texts are still relevant to the modern day audience as life to know is changing with new advancements in technology, nature can still reflect on the way emotions are expressed or felt.

The changing society of degradation the taking over of natural life and having an artificial life can happen as society now in the 21st century has evolved enough to make new life or the advancements in technology out in the world happen. Frankenstein’s obsession with creating a creature led to the isolation from society and the family relations being broken and mend. Frankenstein created a creature of which wanted the ability to love and have some sense of belonging. This however wasn’t the case or Frankenstein as he was appalled by what he had created. This led to the creature feeling left out and wanting some attention.

In order to do this, the creature had gone to long lengths by making his first move. Killing Frankenstein’s brother. Frankenstein had a lot of regret as most of his mind and time went into making a creature that was no use to him instead of being with family and the people he loved. He had begun the travel to his him for his brother’s funeral with emotions growing larger and larger reflecting on nature’s effects around him. Frankenstein’s friend clerval is the only delight to Frankenstein so far and since the making of the creature and the issue of Frankenstein’s dead brother.

This signifies the heart felt emotions and love the people in the 19th century had just as the 21st century audience would. “William thy angel, this is thy funeral, this is thy dirge”. The sympathy in which Frankenstein has for the brother is the worst feeling out for him and soon realizes the creature was responsible for the death of the brother. Family relations for Frankenstein become more meaningful to him then ever as he has opened his eyes up to what he was missing and what is so important.

Family relations in blade runner however are not as clearly evident as it is in Frankenstein. All the artificial life and the fake memory given to the replicants, make them feel like they have a home and they belong to a family. They are all just memories of someone else however, which affects a replicants in person named Rachael. She at a point feels strong moment of disbelief effects emotion which replicants are given as yet. Family relations and values are therefore relevant to today modern society as it allows each individual to feel loved and part of a family.

When that sense of family is gone, the individual may feel the lack of security, love, want and belonging allowing them to feel or have a loss of identity within society. This then leads to the individual becoming homeless, looking for people that can care or love them for who they are or can lead to the individual becoming an orphan which affects the modern audience allowing the audience to think deeply about the meaning of family relations and how they can be expresses. A lot of fear is expressed throughout Frankenstein and blade runner.

Frankenstein has the fear of what is to come from the creature after leaving it with no one to love the creature. That is all what a creature wants. Frankenstein lives in the fear for a long time experiencing the deaths of the loved ones close to Frankenstein all because of the creature. The dreary and gloomy environment expressed throughout Mary Shelly’s novel reflects fear experienced within people in Frankenstein. Same fear is distributed amongst the replicants in blade runner. The steps replicants take have to be careful not to get killed in the advanced society they all live in. Quite and experience to live in fear isn’t it? That’s what its like to me a slave. Painful to live in fear isn’t it? ” as said by Roy one of the replicants, on the very last moment when Deckard is about to fall from the building but is saved b the replicants Roy at the end. Roy was smart enough to demonstrate a type of fear the humans would feel if they were about to die and that is what Roy displayed because replicants only were designed to live for four years and that too without being killed. This is an event of supreme emotional intensity as the lasting scene of the replicants dies in front of Deckard.

This starts getting Deckard to think about Rachael, in which he grew a bonding love towards her which he decides to take her to a place where no one will look for her and she would not have to live in the fear she lives in today. In the 21st century fear is expressed through everyone in all sorts of ways with many issues. Both Frankenstein and blade runner are able to display these types of fears within each of their own issue allowing the thought of what could happen if a new species of human was made from all the advancement in technology.

Is it possible that people later on from the 21st century could soon be living in fear due to the zoom advanced pace of cloning of new species onto earth? Artificial life is brought up both in Frankenstein and blade runner as they both has the desire to produce a new species of humans, to do things inhuman of what they are able to do. It is god’s power to make a human and leave them on earth to discover themselves not for humans to remake. But in Frankenstein, Frankenstein was able to make a human so disastrous to the world that he was running away from the creature himself.

The wrong decision and obsession that had driven Frankenstein to make a creature was wrong as it wrecked relationships and emotions expressed throughout Frankenstein. Blade runner also is a place of artificial life, where you have replicants given fake memories and a life span of four years. Some people live in fear of replicants some do not as because replicants are made so close to perfect t humans they are un I identifiable which brings the questions into many humans thoughts at the time. What if I am a replicants to but I do not know it?

This could be the question within everyone’s mind as the world they live in has become so artificial and fake that what is left to be recognized as non artificial. Deckard does come upon the point that he may be a replicants to when Roy catches Deckard and shouts Kinship, suggesting that Roy may know Deckard could be the 6TH replicant. This topic of artificial life is relevant as it an prove or provide the modern audience with what can happen with the advancement in technology in the 21st century.

There have been many tries of cloning or reproduction of species outside the womb and in test-tube. It is a scary thought and idea that it can be a lead t corruption of making and designing life that is out of hands for a human in todays society to create and that it should be left to go as it was his job to spread his love through making people an leaving them on earth to be loved by one another. To finalize this article it is better to understand that artificial life is something that can be tried but should not be tried, as science is corruption.

It lead to the isolation from society, the wrong decisions can have a bad impact on people one way or another. It is out of hands to create a species that was never somebodies to make. This is the reflection upon which the modern audience should consider as they to are living in a world where technology, family relations, nature and science have become so over advanced if you were to compare the ideas and types of events made form the 19th century throughout to the 21st century.

How Does Comparative Study of Frankenstein and Blade Runner Make the Issues Raised in Frankenstein Relevant to Modern Audience?. (2020, Jun 01). Retrieved from https://studymoose.com/comparative-study-frankenstein-blade-runner-make-issues-raised-frankenstein-relevant-modern-audience-new-essay 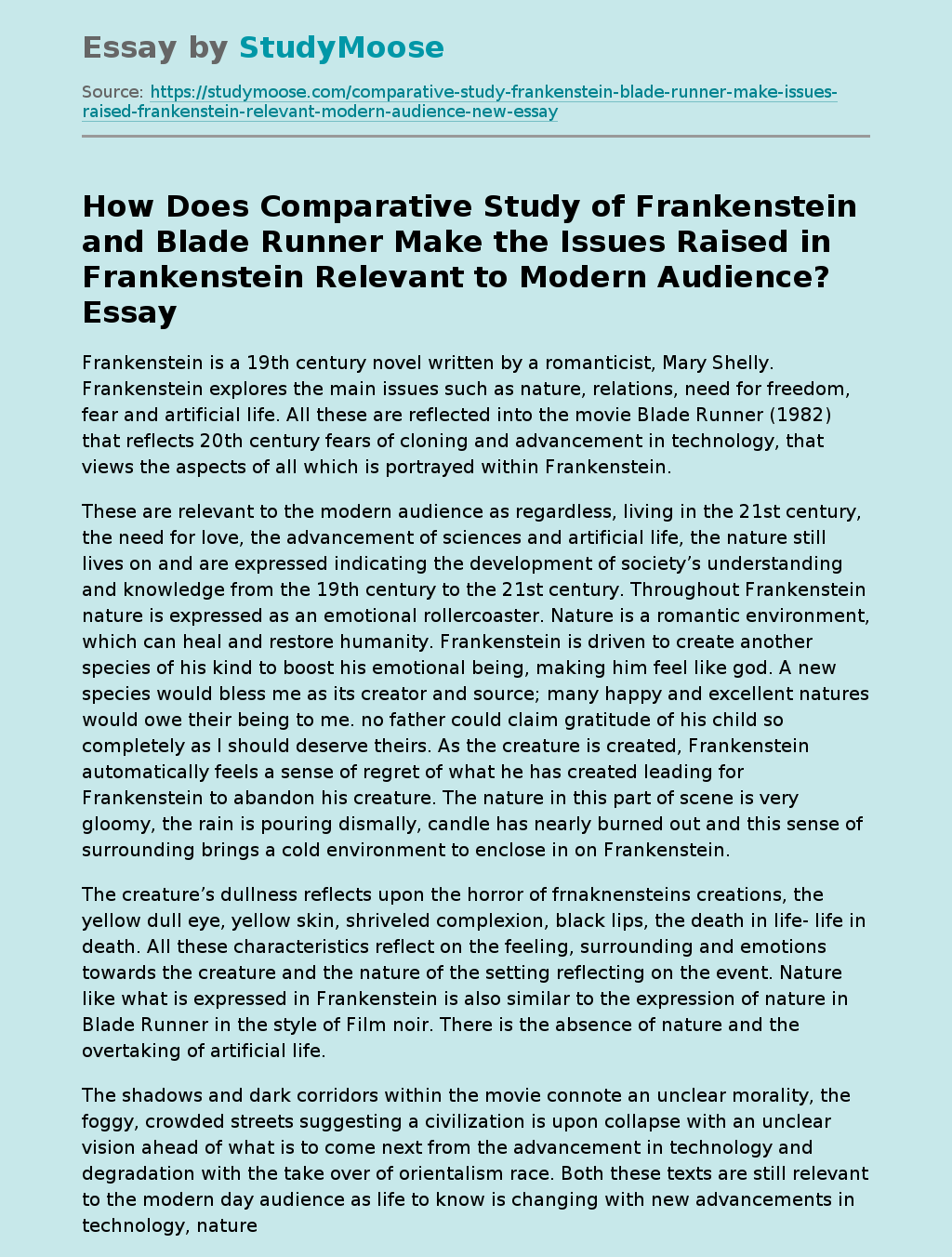