The topic of the role of women in society has been discussed globally for many years, it is discussed to such an extent that every other society is looking in to it, and one of those societies belong to the subcontinent. Due to this, I choose to write my world lit assignment on it. I will attempt to analyze and compare two female characters from the book ‘The heart breaks free’ by Ismat Chugtai and ‘The 100 Years of Solitude’ by Nobel prize winner Gabriel Garcia Marquez.

Don't use plagiarized sources. Get your custom essay on
“ Comparative study of ‘Bua’ from ‘The Heart Breaks Free’ and ‘Ursula Iguran’ from ‘The 100 Years Of Solitude’ ”
Get custom paper
NEW! smart matching with writer

Ismat chugtai writes truly about women and how they were degraded and emotionally dominated by men in their society, while on the other hand Marquez writes about the strength and intelligence of his female characters and how they dominated their men, although this was not the true purpose of Marquez’s writing.

Ismat Chugtai belonged to the subcontinent, and chose to write this particular book during World War 2, she was in her 30’s at the time and observed with a great curiosity of the way of life around her, especially the women who led a suffocating existence restrained within there homes, observing strict purdha, through her writing she wanted to provoke the women of her country to fight for their rights.

On the other hand, Marquez belonged to Colombia and wrote this book in 1967. He won the Nobel Prize for literature for his inventiveness, flow of ideas and imagination.

The book is framed by his devotion to two women. The first is his mother, who gave birth to him on Sunday, March 6 1927, and who emerges as not only the central figure of his childhood, but as the well-spring of his magical view of life.

The second is Mercedes Barcha, “to whom I had been proposing marriage since she was 13”, and whose final acceptance closes the volume. The two characters that I will choose for my comparative study are ‘Bua’ from ‘The Heart Breaks Free’ and ‘Ursula Iguran’ from ‘The 100 Years Of Solitude’.

Aunt Qudsia the protagonist of Ismut Chugtais book ‘The Heart Breaks Free’ is shown as an ineffective person, suppressed by the norms of society. She spends all her life in distress and solitude. She is physically and mentally oppressed by the domination of the men in her life, and is not able to do any thing except of weep ‘like all other stupid women’. She embodies the portrayal of women in the society before the partition of India and Pakistan. She stays “down- to-earth, home bound and unstable”. ” A woman is not safe without a man by her side,” Maulvi Sahib explained.

This statement tells us a great deal about the mentality of the society of the subcontinent, and conversely how there is no problem surrounding the issue of security of women in Maccondo. Women in the sub continent were looked down upon and suppressed as they had no other mean of living except to get married and raise children. Ursula on the other side was also a housewife, but stayed truly sturdy, and tackled all her problems with solemnity and intelligence. She would go about, in concern of her children where ever and when ever. She continued to devote herself to solving the upheavals of society and the welfare of the children.

She would do nothing to cause hurt to the society and would warn others to end incestuous relation ships, although she was the victim of it herself. She would always bee in anxiety of the curse, as she knew that it would be her own folly of the down fall of the dynasty of the Buendia. Unaware of the politics going around Aunt Qudsia would sit In her house, waiting for a miracle to occur, but this was not so as the turning point of the story comes when Aunt Qudsia stands up for herself to undertake all those miseries and to break free from society.

She does this by delaying the taking of laxatives that Nani biwi used to give her, and by falling deeply in love with Uncle Shabir. Though all of this was taboo, she made an attempt to run away with uncle shabir and was ultimately successful in it. By looking at the two characters it becomes clear for me as a person of a completely different environment, as I looked at both extreme sides of life being lived.

This essay didn’t only discuss the oppression of women of the two societies but also how the two reacted at the inadequacy of there norms. Especially in the case of Aunt Qudsia braking free from society, and Ursula iguran trying to save Macondo from the curse. As far as the women are concerned I think that both societies have extremely diff laws and believes depending upon their race, religion etc. on the one side extremisms has been taken to a degree where there is no control, and on the one where ones weakness benefits the other.

Law abiding, demoralized, agitated and jealous is the way I would define the women of the subcontinent, while the women of Macondo would be described as dominant, out spoken, carefree and down to earth. By comparing both novels I have come to conclusion that what ismat chugtai stuggled for all her life, was certainly for a purpose, a reason which in her perspective and all of the other women’s perspective was right, although a very few women got up to fight for there rights, ismut chugtai fought forcefully, as her writings got conveyed.

In relation to the women of Maccondo I think the women shouldn’t get that open as there will always lie barriers in between societies as religion and belief plays an important role, but also they shouldn’t get so caught up in the believes of others that they forget how to stay stable. When I say stable I mean that they should get them selves educated, and should be capable enough to support themselves at crucial times, like Aunt Qudsia relied on her husband so much, that she had agreed to stay all her life as a servant.

Comparative study of 'Bua' from 'The Heart Breaks Free' and 'Ursula Iguran' from 'The 100 Years Of Solitude'. (2020, Jun 01). Retrieved from https://studymoose.com/comparative-study-bua-heart-breaks-free-ursula-iguran-100-years-solitude-new-essay 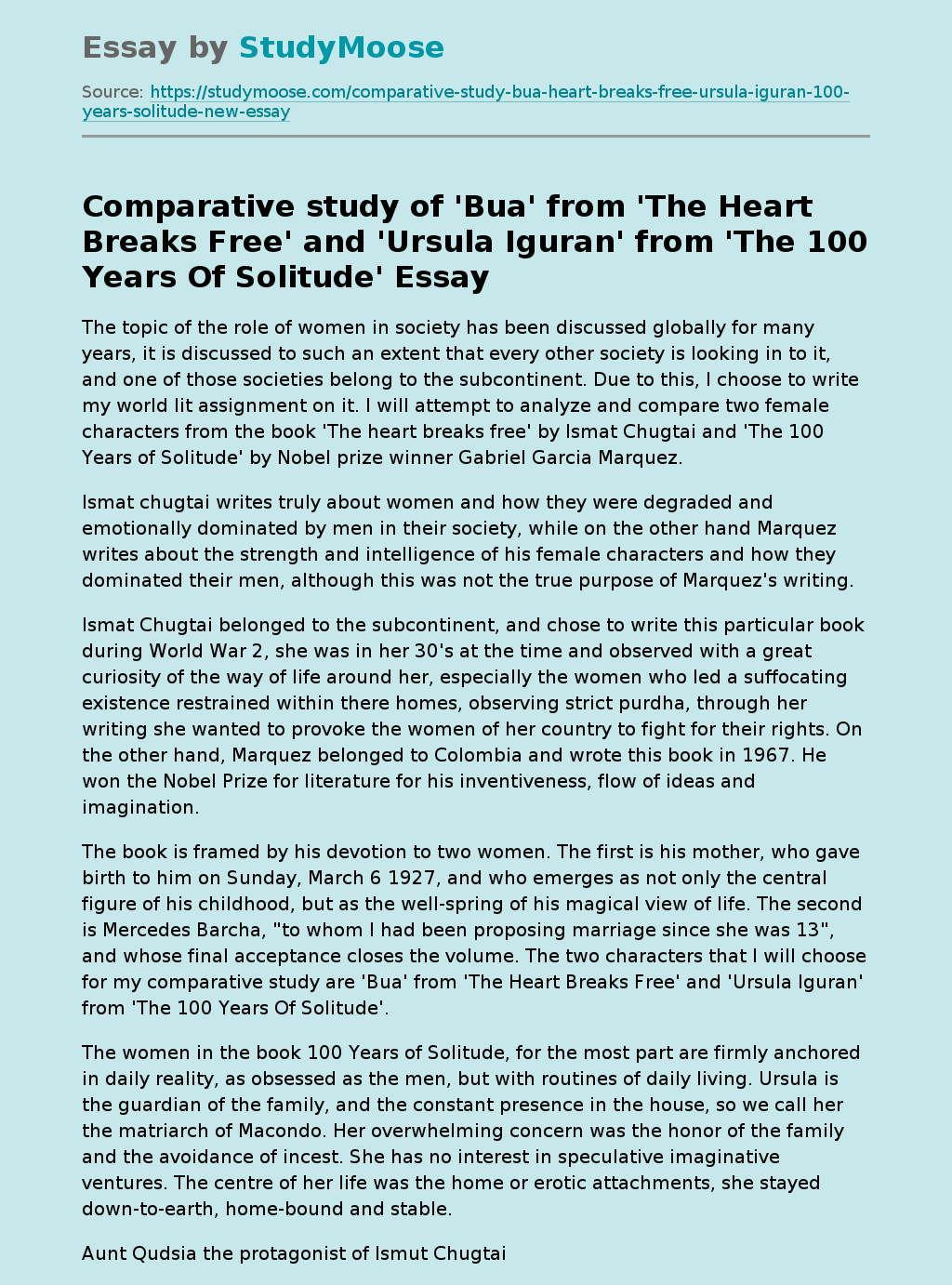