Any movie based upon a piece of literature can make or break its source of inspiration. Some movies do no mercy toward the book, while some exceed the quality of the novel. The movie, The Secret Life of Walter Mitty, directed by Norman Mc Lean, was a much better piece of work than the short story, “The Secret Life of Walter Mitty,” written by James Thuber, because the video had a satisfying conclusion, more action, and a much more developed and advanced plot.

Don't use plagiarized sources. Get your custom essay on
“ Comparative Essay The Secret Life of Walter Mitty ”
Get custom paper
NEW! smart matching with writer

The conclusion of the story left you unsatisfied and discontent because it didn’t really tell you what happens to the protagonist; it just ends, while the movie ends with Walter, the protagonist, finding love. Walter also overcomes his low self-esteem towards his boss and says, “The smartest thing you ever did was hire me!” He goes further in saying that all his boss does is make money of his ideas. The confidence Walter shows at the end of the movie gets him to a higher a position at work.

Proficient in: The Secret Life of Walter Mitty

In addition, the movie also leaves you feeling satisfied because the bad guys, the antagonists, are caught and put in prison. Therefore the movie had a more rewarding conclusion than the short story’s inconclusive ending.

The movie had much more action, partly because it was more developed, interesting and exciting. The plot involved more than just Walter going to the store to pick up some items for his wife, as in the story. The movie included bad guys chasing Walter throughout the movie because he accidentally took possession of a precious notebook.

In addition, it also incorporated Walter committing death-defying feats such as falling out of, and climbing through sky-high building windows, and tiptoeing along the edge of these buildings. Action was also added through the extra daydreams Walter experienced during the movie, such as the shoot-out near the end of the movie and the Mississippi gambler. Moreover, action was added with Walter running from the bad guys while setting up various booby traps, consequently getting caught in them himself. This caused skepticism in the audience’s faith of Walter’s defeat of the bad guys, but in the end Walter pulled through. As a result of these qualities in the movie, action was added, while the short story was dry and exclusive of action.

A well-developed plot must have some sort of love interest, action, and a climax, and humor can help. The story did not include these fundamentals. On the other hand, the movie stuck Walter in a very awkward position, which advanced the plot tremendously. Walter’s mother chose Walter’s fiancé, whom he did not have feelings for. Then he met Virginia Mayo, the woman of his dreams, with whom he fell in love and ended up marring by the end of the movie. The short story didn’t have a plot; it was just a series of thoughts and daydreams with no climax, conclusion or real development of setting.

There was nothing to the book; it just explained a day in the life of Walter Mitty, compared to the movie which involved Walter overcoming chases through windows and through warehouses, his nasty boss, and his over protective, bossy mother. The movie also had a lot of humor in Walter’s clumsy attics, such as when he was running from the bad guy and knocked over the water dispenser, when he broke the window after slamming it behind him, and when he fell through the window in the office during the business meeting. Another example would be when he set up the booby traps for the bad guys and then ended up setting them off himself! With all of these modifications to the short story, the movie’s plot was much more enhanced and developed. 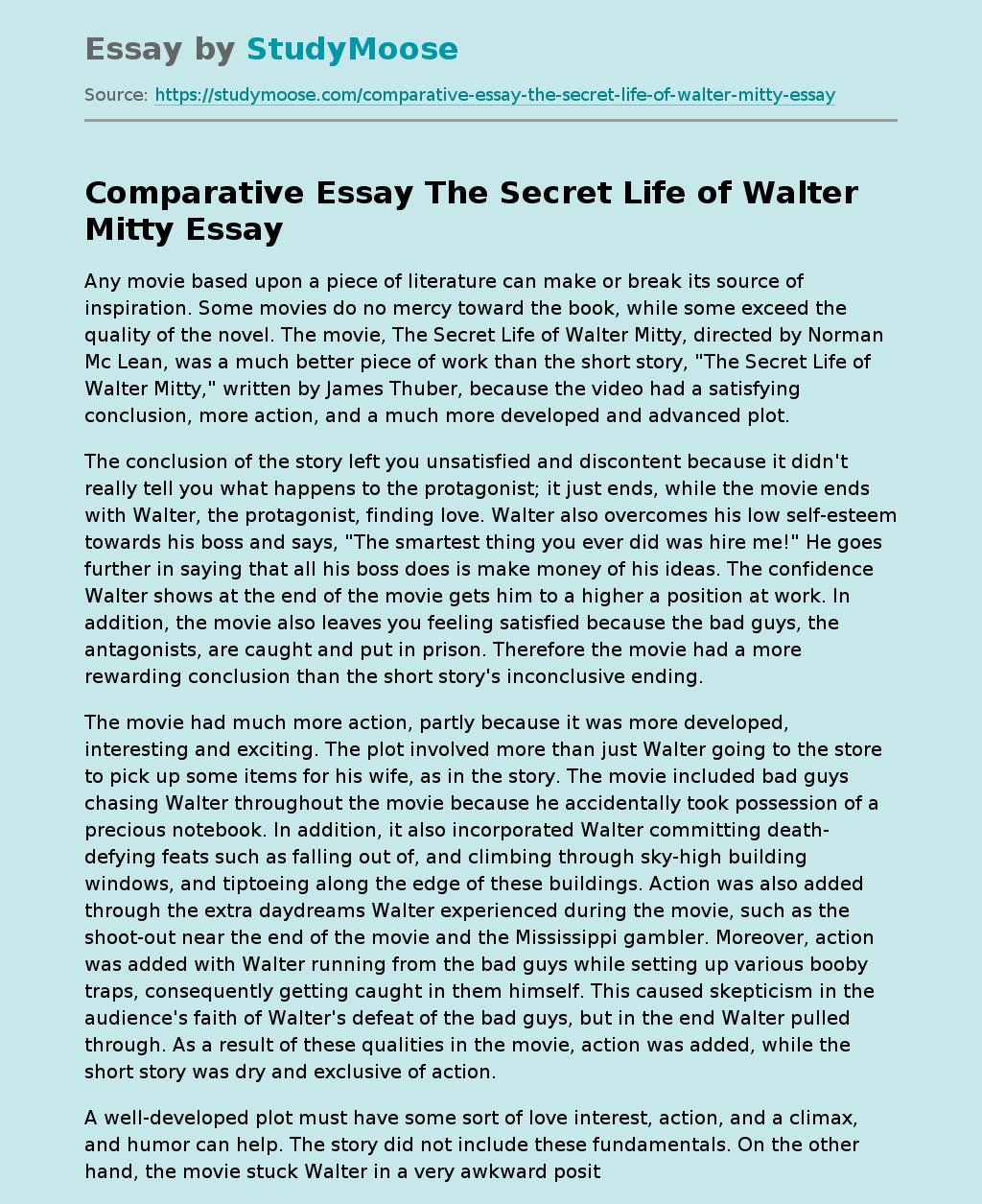