Philosophers live and encourage others to live according to the rules of practical wisdom. Aristotle, Immanuel Kant, and Emmanuel Levinas were three philosophers who sorted out various ethical approaches. They investigated complex human actions and theorized what is the ethical thing to do. For instance, Aristotle contemplated the aim of human life, Kant observed duty and obligation from respect for the law, and Levinas examined one’s responsibility to the Other. These unique points of view offer different answers regarding the search for the good.

Don't use plagiarized sources. Get your custom essay on
“ Comparative essay describing the ethics of Aristotle, Immanuel Kant, and Emmanuel Levinas ”
Get custom paper
NEW! smart matching with writer

They all thought an ethical person must be rational and responsible for their actions.

They proposed that each person has a duty towards others and society. Aristotle lived during the B. C. era and established the concept of teleological ethics. This means that ethics has a purpose or a reason. He stressed the concept of doctrine of the mean– maintaining balance in one’s actions. Additionally, he theorized the idea of developing virtuous habits to build good character as well as that happiness is the main goal of all human beings.

He explained how reaching one’s potential by living well and acting well will ultimately lead to happiness.

Moreover, he stated one should base one’s actions on reason and he introduced the concept that reason controls desire. Immanuel Kant was a philosopher who lived the majority his life in the 1700’s. He believed that an individual should use God, freedom, and immortality to be able to pursue and attain the supreme good. He also believed in deontological ethics, meaning it is one’s obligation and duty to do what is right. Kant said that an individual must use intellect, free will, and reason to carry out this duty.

He is similar to Aristotle because likewise, he believed that it is ideal for all people to act in an ethical manner by using reason. However, unlike Aristotle, Kant believed one must act ethically as an individual autonomy for the good of society.

He said that one must use reason and free will to carry out one’s duty and moral obligation to do good. He stressed the concept of not expecting to gain anything in return while performing ethical tasks– even though one might not like it– one should act ethically out of the goodness in one’s heart. On the other hand, Aristotle believed one should act ethically as part of a community– based on politics. He also expected a benefit in return, contrary to Kant.

Aristotle said that it is ideal to achieve a reasonable means in ethics, and he expected to gain something– like happiness for instance– in return. Also, contrary to Aristotle’s theory, Kant’s theory proposes that it is not very possible to achieve the supreme good in one’s lifetime. He suggested that humans must achieve this good in a life after death. This proves that their theories regarding how to achieve the supreme good differ considerably. Emmanuel Levinas was a Jewish philosopher of the 20th century. He observed that the West focused on the Unity of Beings, not the Hebrew infinity.

The Hebrew Infinity focuses on uniqueness and singularity of things which gives them identity. Levinas based his ethics on this concept. Levinas believed one encounters the good or God in all individuals or in creation. He said one needs to recognize these traces, accept them, and respond to them. He talked about the thrill of astonishment, which is a face to face experience that touches one deeply. Additionally, he suggested that the face of the stranger (the Other) demands that you recognize it and provide it hospitality. Thus, the face becomes ethical. He had this whole idea of promoting freedom rather than limiting it.

He believed that the face is a “trace of God” that refuses to use power. Instead, the face calls one to be responsible by humbly beckoning those that passes by. Kant also had similar theories as Levinas because both of them emphasized that God is necessary for a person to act ethically. In other words, they included God in their search for the good. Kant believed one cannot do this without God, whereas Levinas believed humans are motivated by God to do good. With the concept of the Other, Levinas suggested that humans have a responsibility to respond with caring and compassion.

Similarly, Kant also believed in caring and compassion because he believed in the Universal Law– if it is an act that is good for everyone, then it is good for an individual. It is evident that Aristotle, Immanuel Kant, and Emmanuel Levinas were three philosophers who sorted out various ethical approaches that aided them in their search for the good. Despite the fact that they have several similar theories, each philosopher has many unique theories that will continue to help future generations learn to live ethically and to ultimately achieve the greater good. 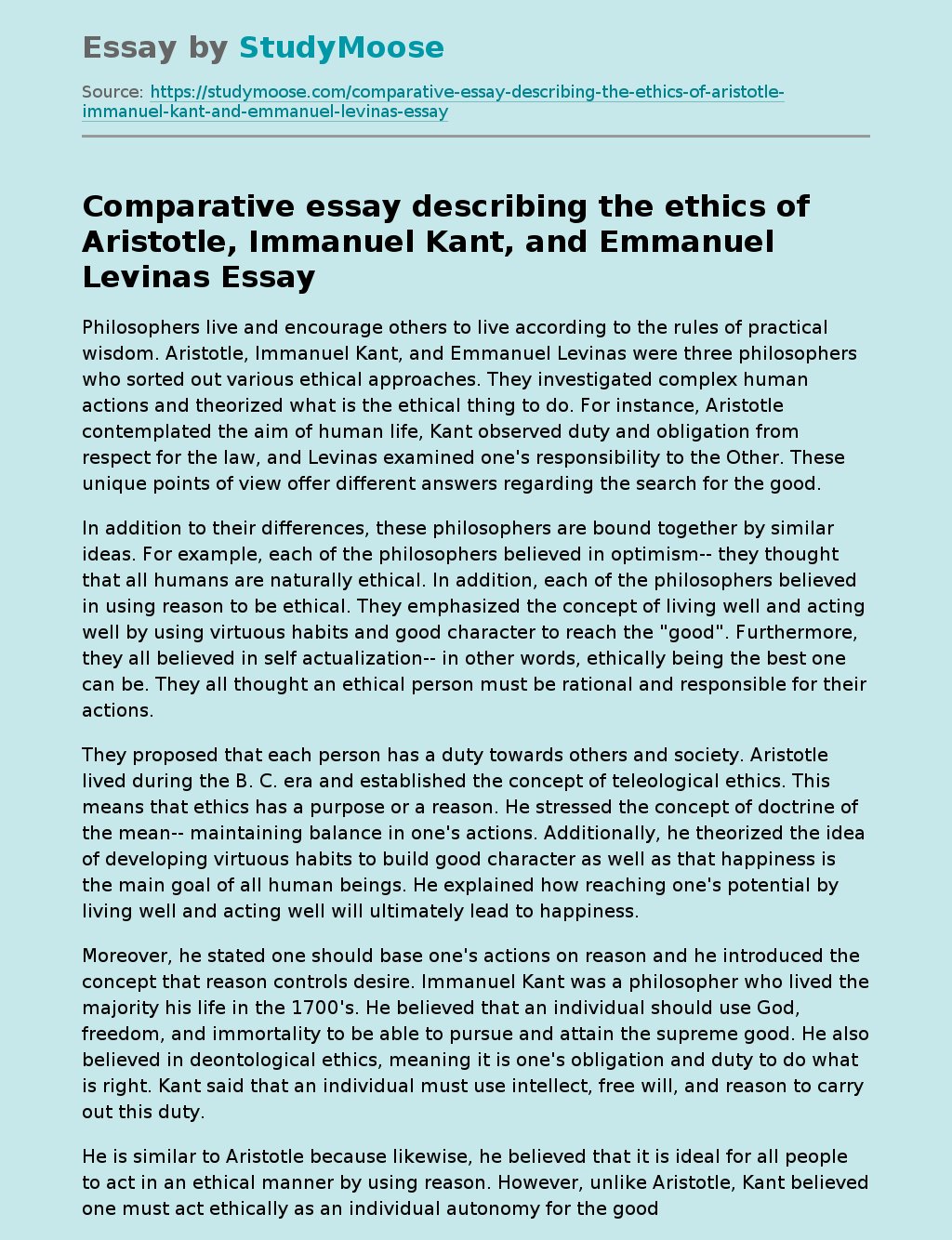