Running a company often centers on the idea of considering both positive and negative factors in order to then hand down executive decisions accordingly. To best understand the strengths and weakness of any given company, one must understand its base operations and the scope of industry in which the firm exists. In doing so, one would have a bigger picture of how the company operates and how success has been fostered in, as well as highlight in areas in which the organization could stand to see improvement.

Don't use plagiarized sources. Get your custom essay on
“ Company Analysis of General Electric ”
Get custom paper
NEW! smart matching with writer

In this vein, a full analysis of General Electric was conducted, which includes an overview of the company including background and position in the manufacturing industry, as well as insight into the company’s management structure. Additionally, the company’s financials will be examined so that a recommendation can be made. Overview of Company

According to the company website (2014) General Electric’s slogan is “Imagination at Work” and to this extent, the organization has been fostering in imagination for quite some time.

According to the research, the company was founded in 1878 by Thomas Edison in Menlo Park. Edison is most notable for inventing the light bulb, and as such, this corporation is one of the largest companies on Earth more than a hundred years later (General Electric, 2014). After getting its start in the 1800s the company, being a leader in the industry of manufacturing and resting solely on the idea of innovation and inventions, began to manufacture different items across a wide variety of industries.

According to the GE company website (2014) these inventions were primarily Edison’s own, and by the early 1900s the company, even against the Great Depression, the organization continued to make appliances for the home, delved into aviation technology, and began to further expand into new markets. As the research notes, because of this the company began to break up into several subdivisions such as GE Consumer Finance or GE energy in order to fully control its wide scope of offerings (General Electric, 2014). By the 2000s, the corporate website notes that the company further expanded into new markets, both online and for various infrastructures and industries around the world. Today, the company has also delved into clean energy technology and pulls in an estimated $2 billion for electronics and home appliance sales alone (General Electric, 2014). Management Structure

Looking to research conducted by Abetti (2011) one can see that the organization has one of the most complex management structures of all major conglomerates. In addition, as the company website (2014) points out, this structure has been in effect since the 1920s and instead of reevaluating this system; the company has only expanded upon it. According to Abetti (2011) at the top of the management structure, governing all areas is the Chairman and CEO, as well as the board of directors. Next, according to the research are two specific divisions: external and internal company functions. Internally, the company has global research, human resources, and its finance department, while externally; the company has commercial and public relations, business development, and its legal department.

As noted by the company website (2014) next the company has its specific divisions or sectors, which this breakup is most notable for. These are as followed: Global Growth and Operations, Energy, Capital, home and Business Solutions, Healthcare, Aviation, and Transportation. It should be noted that each of these organizations exist as their own subdivision and entity, following the GE name. For instance, there is GE Energy, GE Home & Business Solutions, and so forth. This kind of management structure is beneficial to the company in two different ways. To start, it allows the organization to have each subdivision hand down its own division and be more or less contained within its own scope of industry, however, it also ensures that a high level of guidance will still ensure that upper-management is still well aware of what kind of decisions and operations these subdivisions will invest into.

In this vein, according to research that has been conducted by Souraj (2010) each of these divisions utilize a lean manufacturing type of approach in order to ensure that all waste is eliminated and the sectors are utilizing the resources to the fullest. This ensures that the company is being cost effective in its approach and it allows the company to be innovative, without creating the potential problem of being extremely wasteful, which would then cut back on the organization’s profitability (Souraj, 2010).

Moreover, each division also utilizes a six sigma approach in order to achieve near perfection. Essentially, this process rests on considering how each sector is doing in its own industry. For instance, despite the fact that GE Energy has seen slowed economic growth, this does not mean that GE Home & Business Solutions has as well. As such, utilizing a six sigma approach will allow the organization to consider the needs and goals of GE Energy before planning for solutions accordingly. Financial Overview

According to research that has been drafted by Abetti (2011) by the year 2000 “General Electric was the world’s most valuable company with a market capitalization of $520 billion.” However, as the research points out, by 2008, after the U.S. recession led to a national economic downtown this figure had fallen 69% percent to $163 billion (Abetti, 2011). In addition, the global financial system has been equally a cause of concern and if one can consider the U.S. economic downturn the cause of the decrease in market capitalization, the world’s economy is the factor that has kept the company’s overall financial state lower than usual (Abetti, 2011). Although, the research points out that the organization has began to see a small increase, and thus, the company has hopes that these numbers will turn around, growth and expansion has not been seen as it had prior to 2008 (Abetti, 2011).

This is largely attributed to the belief that the world’s financial system will see an upwards swing as a natural flow and with the idea that expansion can be considered a way for the company to cut back losses in some areas, while gaining them in others. According to research conducted by Abetti (2011) this line of thinking will not lead to the company to success and instead the company should “go back to GE’s traditional core competencies and divest non-core businesses.” Moreover, the company should also expand its globalization efforts, rebuild trust between employees and the company, strengthen financial and auditing function authority, and continue to invest in R & D. Although, many of these considerations are subjective, they bear a great deal of consideration when examining the company’s financials going forward. Conclusion

General Electric remains one of the largest companies in the world, despite some of the misgivings mentioned previously. The company has a number of
strengths including a diverse portfolio, existing in a wide range of industries, and its ability to be industry-leaders when it comes to innovation and gauging what products will be a success in the future. With this in mind, however, one recommendation that can be made to the company, based on the available research is for the organization to focus on current offerings, rather than continue to seek after non-traditional competencies. Moreover, the company must consider R & D efforts in order to continue to be the forbearers in innovation and creativity. Doing so will open the company to new markets, rather than the company attempting to slip into them and then compete with others in the market as a smaller entrant. If the company commits to these factors than there remains little doubt that General Electric will go back to being one of the world’s most valuable and innovative companies. 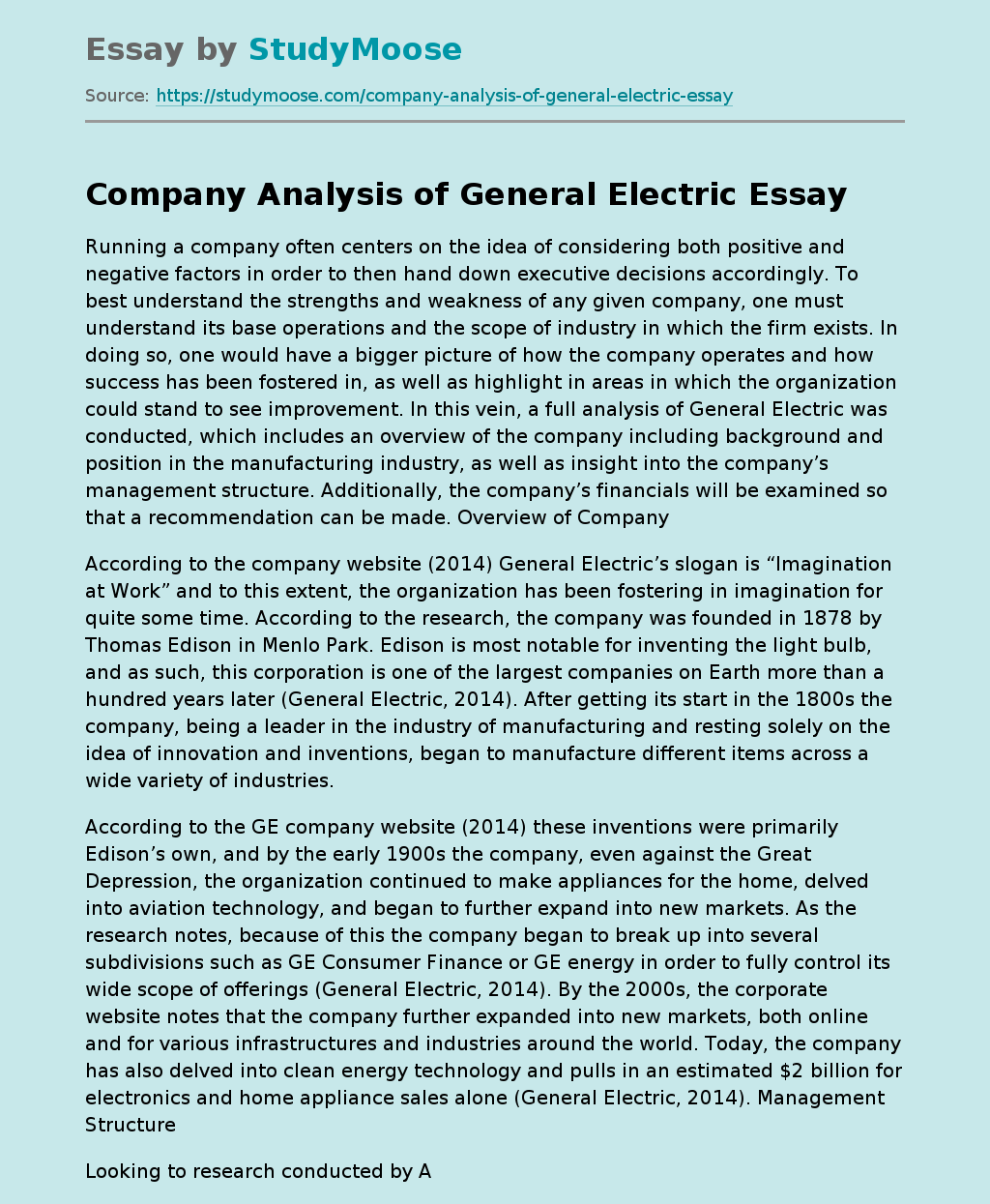