A discussion of the pro and cons of gun control, with a focus on the benefits of education towards using firearms.

It’s late at night, and you’re home all alone. You double checked to make sure all of the doors were locked and made sure all of the windows were closed. It’s been a quiet night, but for some odd reason you cannot sleep. During your restless night, you hear a bump in the kitchen. At first you dismiss it as the wind.

Don't use plagiarized sources. Get your custom essay on
“ Commonsense Control vs. Gun Control ”
Get custom paper
NEW! smart matching with writer

But there it is again, and it’s louder this time. You’re scared, your pulse is racing and you cannot think of what to do. You don’t know whether to call 911 or just lay there and hope whatever it was will go away. But then you realize you have a 9-mm Smith and Wesson handgun in the nightstand. You quietly get it out, take off the trigger lock, and retrieve the bullets from on top of your dresser.

You don’t want to create a situation that isn’t necessary so you huddle next to your bed and hope whomever it is takes what they want and leaves. You hear them walking down the hallway toward you. Your bladder nearly lets go. The intruder tries to open your door but luckily you locked it.

There still is the possibility that it’s you spouse so you don’t shoot the intruder through the door. Then the intruder kicks the door in, sending splinters of wood flying about the room.

The time has come, you raise from the side of your bed, instinctively assuming a marksman’s pose and fire just as the intruder is raising his weapon. He flies back against the wall and slumps into a lifeless pile. You then proceed to call 911. Now, that is not an uncommon scenario in the present state of society. Now what I ask you to picture is that same scenario, but this time only the intruder has a weapon because all guns have been outlawed and the criminal is the only person who can get their hands on them. It’s a rather scary thought, isn’t it. But that is exactly what some people want. Read why education is the most powerful weapon

They want a ban on all firearms. But that is not the solution, the solution is the education of every person that purchases a firearm and required trigger locks, and stricter compliance by judges to the sentences mandated for crimes involving firearms. The “most recent attempt at federal gun legislation was the Gun Control Act of 1968” (Goldwater 183) and has done little if anything to lower the number of crimes committed using firearms. In fact, “the number of shooting homicides per year has climbed steadily since it’s enactment, while armed robberies have increased 60 percent.” (183). Now, this is a staggering piece of information. But it’s just one piece of evidence that shows that gun control laws are only marginally effective, if at all, in curtailing crimes involving firearms. Now, I am not saying that there should be absolutely no restrictions on who has a fire arm, because that is not true.

“Most everyone will agree that felons, addicts, morons, juveniles, alcoholics, the mentally incompetent and others in whose hands even an ice pick or baseball bat becomes a deadly weapon, should be denied guns.”(Selib 202). But banning all hand guns is not the way to go about lowering the rate of crimes involving hand guns. As an example: . . . in the decade from 1960 to 1970, gun crimes in England increased some 750 percent – this in a country where there aren’t supposed to be any pistols in private hands. What is demonstrated forcefully in England is that in a place where guns are outlawed, only outlaws have guns. (202)

As I have pointed out, gun control legislation has only a marginal effect. I think that more headway in lowering handgun related crimes could be made through education. This exact point is made by Barry Goldwater: Gun education, in fact, can actually reduce lawlessness in a community, as was demonstrated in an experiment conducted in Highland Park Michigan. City police launched a program to instruct merchants in the use of handguns. The idea was to help them protect themselves and their businesses from robbers, and it was given wide publicity. The store-robbery rate dropped from an average of 1.5 a day to none in four months. (186)

There is one other way of dropping the crime rate involving firearms, this is through stricter laws in respect to crimes that involve a firearm. “A study . . . revealed that in New York City, which has about the most prohibitive gun legislation in the country, only one out of six people convicted of crimes involving weapons went to jail.” (Goldwater 186). Statistics like this arise “because too many judges and magistrates either don’t know the law or are unwilling to apply it with appropriate vigor.” (186)

The NRA has in the past, and are presently, supporting measures to increase the severity of the punishments of the “incorrigible minority who place themselves outside of the law.” (Cassidy 238). And “As a result [of such support] . . . violent crimes with firearms, like assault and robbery, have stabilized or are actually declining.” (238) It’s been proven in the past the “levels of firearm ownership cannot be associated with the levels of criminal violence. . . . On the other hand, tough laws designed to incarcerate violent offenders offer something gun control cannot: swift, sure justice . . . with no accompanying erosion of individual liberty.” (238).

And for those of you out there who are not only concerned with the crimes committed with hand guns, but with the deaths due to accessibility of hand guns in the home, there is a solution. Most children will only play with a gun if they can find it and figure out how to use it or make it do something. Well, with a trigger lock on it, which will prevent it from doing anything and therefore make it uninteresting. And if the gun is kept in a safe spot, then it will no longer be accessible at all. Some people argue that crimes of passion happen mainly due the availability of hand guns, but “if a person is angry enough to kill, he will kill with the first thing that comes to hand a gun, a knife, an ice pick, a baseball bat.” (Goldwater 184)

A trigger lock will also help to prevent the use of guns in crimes of passion, delaying, if not stopping, the person from using the gun. These might sound like simple solutions to a difficult solution, but they are solutions that will work. Nan Desuka put it best, “‘Guns don’t kill people – criminals do.’ That’s a powerful slogan, much more powerful than it’s alternate version, ‘Guns don’t kill people – people kill people.'” And I think that this is true. It has been proven repeatedly that gun control laws and bans on some types of firearms just do not work well enough. It’s time that we stop trying to keep guns out of the hands of criminals by taking guns out of the hands of law-abiding citizens. It’s time to start educating each gun owner on how to safely use and keep their weapon.

That, along with tougher penalties for those using guns during crimes, will lower the crime rates involving guns and the deaths related to guns. 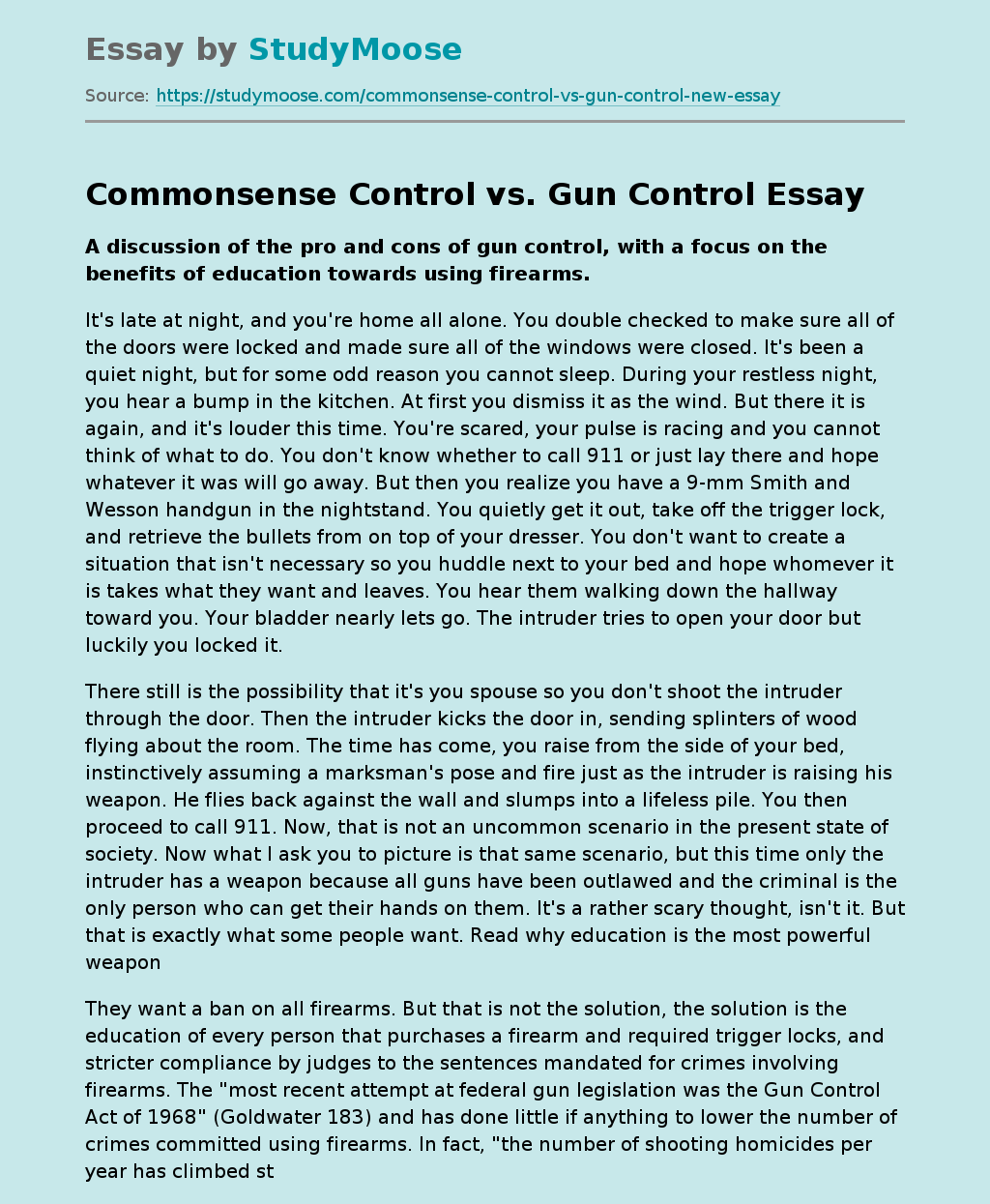