Common Sense Economics: What Everyone Should Know About Wealth and Prosperity by James D. Gwartney, Richard L. Stroup, and Dwight R. Lee is an easy read that I found informative and manageable. It teaches the ideas of macroeconomics but in a way that people can use to understand and evaluate the process of our economy and the government’s impact.

It is not a textbook with charts, graphs, and formulas which allowed me to be able to read it and understand what the authors were explaining.

The book expanded a lot of ideas that are presented and lectured to us in class. At the beginning of the book, the authors of the book started to break down this message of economics by explaining to the readers the twelve key elements of economics.

The authors felt that these key concepts were important for the readers to understand the inner workings of economic success.

These key concepts are needed from readers to understand the true meaning of values, cost, prices, and standard of living.

In the authors’ minds, they felt these key concepts were needed to help explain important concepts that they would explain later on in the reading. The first concept, Incentives Matter, is the first concept that the authors talked about in the book. They put great emphasis on this particular concept. They explained that this very concept was the basis for economics.

They explained that: “Changes in incentives influence human behavior in predictable ways”. The main point of this concept is that the more attractive an option is the more likely an individual to choose it. They used examples such as employees will work harder if they feel that they will be greatly rewarded or a student will study material that they feel will be on an exam. This concept also can be correlated with the political process as well. It is explained that citizens will vote for candidates that will benefit them in their own personal lives.

The second important concept was “There is no such thing as a free lunch”. This concept is built based upon a human desire for good being unlimited and the limited resources to match that could not possibly match those resources. This is related to the theme of opportunity costs.

This means that the choice of one thing, but you must sacrifice the opportunity to do another thing. There are opportunity costs with producers with the cost of outputting quality goods and adhering to regulations put on by the government.

For example, when they increased that price of gas because of the California tax on gas I had to start saving on the gas that I used instead of going out more as I used too. Also, the choice of going to the gym or letting go and relaxing is a decision that has consequences in the long run. You could spend $4 on a Starbucks coffee that if invested at 10% for 50 years is really $470.

You want to make the marginal costs equal the marginal benefit of the action. Voting requires marginal-decision. The 2018 elections were the first time I was able to vote and every choice I made I had to do some research before making since even though you want to vote for who you go with there are benefits but also are some costs for doing so.

The fourth concept has to do with “Trade promoting economic progress.” Trade moves goods from people who value them less to people who value them more. Trace makes larger outputs and consumption levels possible because it allows each of us to specialize more fully in the things that we do best. Voluntary exchange makes it possible for firms to achieve lower per-unit costs by adopting mass production methods.

The fifth concept is “Transaction costs are an obstacle.” Not all middlemen are obstacles; sometimes they reduce transaction costs by brokering deals. Voluntary exchange promotes cooperation and helps us get more of what we want. Transactions costs are sometimes because of physical obstacles, lack of information, time and energy, political obstacles such as taxes, licensing requirements, government regulations, price controls, tariffs, or quotas.

Middlemen help set up trades and help reduce transaction costs and promote economic progress. For example, when I go to the grocery store to get groceries the grocer has the groceries I need instead of having a farm or garden in my house. Another example of a bad middleman is the campus bookstore which sells books for more than online where you can get the same book for half the cost that the bookstore sells the book for.

The basic idea of this concept is that prices will be the driving force of how buyers and sellers will make their choices. This brings in the laws of supply and demand. In summary, these laws describe how the price will always bring the buyers and seller in agreement. This means if the prices set by the seller is too high, the buyer will either not buy that product or buy fewer units, and this will force the seller to lower the price but to the equilibrium price.

The seventh concept is “Profits direct businesses towards activities that increase wealth.” If a company is making money then they will be more inspired to make more of the product since if demand goes up then supply will go up.

The eighth concept is “People earn income by helping others.” People who earn large incomes do so because they provide others with lots of things that they value. If these individuals did not provide valuable goods or services, they would not be paid so generously.

There is a moral here: If you want to earn a large income, you had better figure out how to help others a great deal. The converse is also true. If you are unable and unwilling to help others very much, your income will be small. This direct link between helping others and receiving income gives each of us a strong incentive to acquire skills and develop talents so we can provide others with valuable goods and services.

The ninth concept is “The production of goods and services people value not just jobs, provide the source of high living standards.” When analyzing this view, it is important to keep in mind that it is the production that really matters, not jobs.

If jobs were the key to high incomes, we could easily create as many as we wanted. All of us could work one-day digging holes and the next day filling them up. We would all be employed, but we would also be exceedingly poor because such jobs would not generate goods and services that people value.

The eleventh concept is the “Invisible hand” of market prices directs buyers and seller toward activities that promote the general welfare. The phrase invisible hand was introduced by Adam Smith in his book ‘The Wealth of Nations’. He said.

“It is his own advantage, indeed, and not that of society which he has in his view. But the study of his own advantage naturally, or rather necessarily, leads him to prefer that employment which is most advantageous to society·He intends only his own gain, and he is in this, as in many other cases, led by an invisible hand to promote an end which was not part of his intention.”

He assumed that an economy can work well in a free market scenario where everyone will work for his/her own interest. The invisible hand pushes me to do what is best for me like going to college and pursuing what I want to do in life as it tries to do for everyone.

The twelve concept is “Too often the long-term consequences, or the secondary effects, of an action are ignored.” 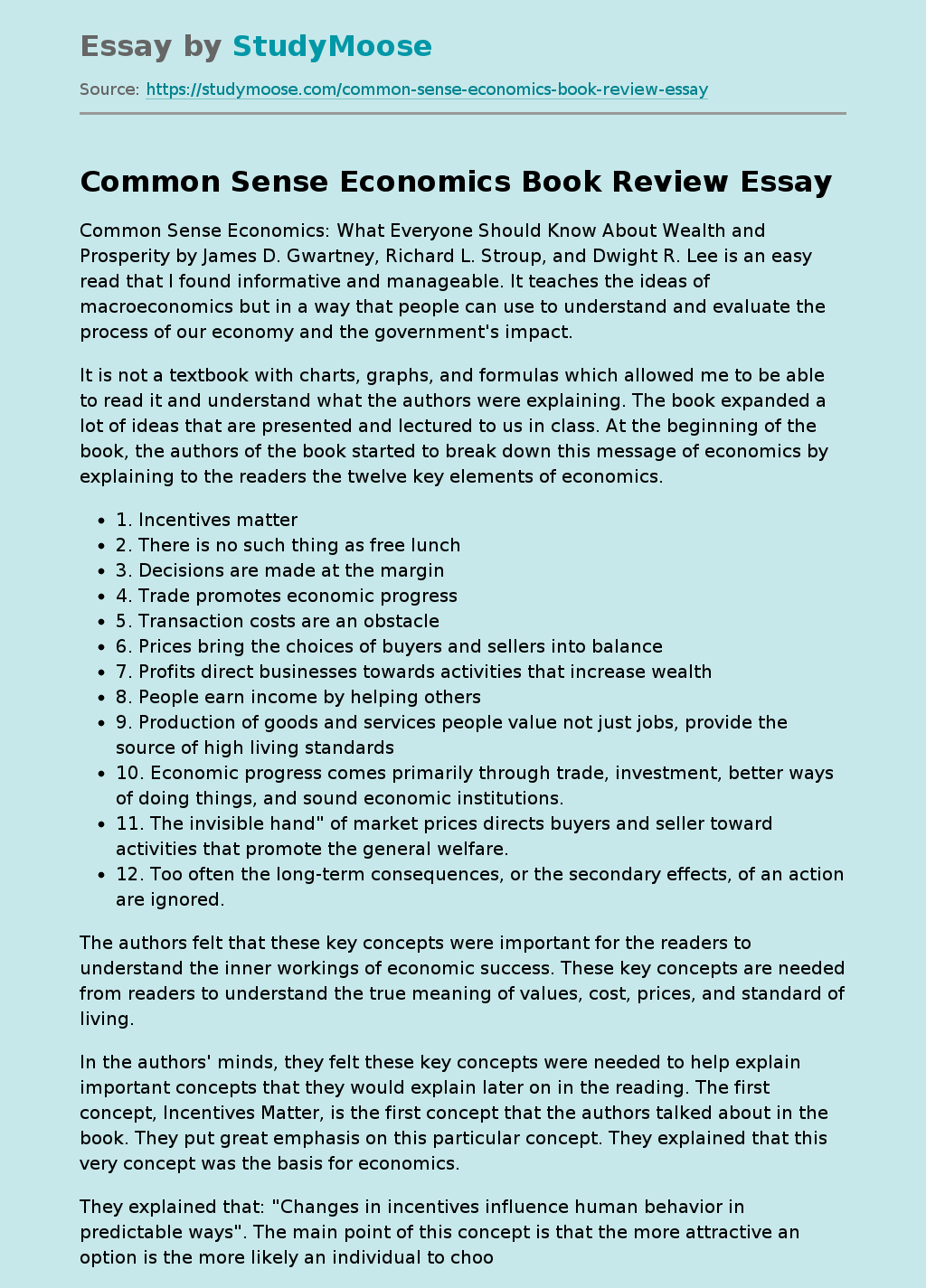