Commentary on a Speech by Oedipus from Oedipus Rex

Oedipus, noblest of all the line / of Kadmos, have condemned myself to enjoy / these things no more,” laments Oedipus in utter despair at the end of the play Oedipus Rex, the first of the trilogy by Sophocles (13-16. Appendix). Oedipus blinds himself upon the discovery of himself as the murderer of his father and of Iocaste’s death. Yet, in midst of intense pain he is able to compose himself, and delivers one of the most moving speeches in the play.

Don't use plagiarized sources. Get your custom essay on
“ Commentary on a Speech by Oedipus from Oedipus Rex ”
Get custom paper
NEW! smart matching with writer

In a fifty-four-line speech in xodos, Oedipus reflects on the fateful events in his life leading to the catastrophe and justifies his action of self-blinding.

The themes, subtle motifs, vivid imagery, careful diction and effective structure of the speech are ingenious touches that complete Oedipus’s portrayal as a tragic hero. Although the chosen passage is a translation from Greek to English, the translators “found the best English equivalent in a literalness which extended to the texture and rhythm of the Greek phrasing [.

. .] to render precisely-the emotional and sensible meaning of every speech in the play” (Fitts and Fitzgerald, “Commentary” p.239).

This is the first lengthy speech Oedipus has given in ï¿½xodos. Sophocles uses this opportunity to establish Oedipus’s place as a tragic hero. The chorus’s comment that Oedipus would be happier if he committed suicide impels Oedipus to give this speech as a strong and powerful defense of his resolve to remain alive. “Do not counsel me anymore” snaps Oedipus to the chorus assuming an authoritative tone in revelation of the assertiveness of his decision (1).

His speech changes from the brief lyrical outcries during the kommos with the chorus to mostly Alexandrine and occasionally iambic pentameter to express a calmer and more logical self. However, the speech is in continuous and longer sections than Oedipus’s normal speech to show his sorrow and overwhelming emotions. Oedipus makes no mention of his physical pain, but rather is concerned with the psychological torment the truth brings. In lamentation, Oedipus sighs that he cannot bear to see his parents, children, the images of the gods and Thebes (5-11).

There is a very cruel peripeteia in these statements from Scene III when he thought it would sweet to see his parents again. Oedipus also grieves at the irony of his contradictory value as the “the noblest of all the line / of Kadmos” (14-15) and one that is cancerous with evil (33-34). All the things that were once the joy of his life now become the source of his pain. Twice in the speech, Oedipus begs to be hidden away from men’s eyes forever revealing the incredible burden of guilt he carries (20, 52). Consequently, he struck his eyes out so to alleviate the pain.

More importantly, Oedipus chooses self-blinding over death because he sees it as a “just” punishment more painful than death, fulfilling his declaration to severely punish the murderer of Laos in Scene I, and subsequently sustaining his moral clarity (2). Phrases from lines 1-2, “this punishment / that I have laid upon myself is just” and lines 13-15, “I […] have condemned myself” reveal that Oedipus is very clear in making the distinction that the punishment was self-chosen unlike the sufferings brought by Apollo. These actions make Oedipus all the more tragic and heroic because he makes a conscious decision to resist misfortune and endure life. His active role in judging and punishing himself also elevates his character because it is a privilege reserved for the gods.

With the loss of sight, Oedipus gains insight into his identity. Oedipus searches for self-understanding through retrospect of his life in the first, second and third sections of the speech. The subsequent naming of the crucial places of his past in these three sections thus marks Oedipus’s symbolic journey of reliving his life, this time with awareness. Oedipus addresses to each place in second person and personifies them. In these sections, Oedipus reaches his point of emotional climax in the speech, therefore rhetorical questions and exclamations are frequent. Beginning with Kithairon, the place his parents abandoned him, Oedipus asks a series of rhetorical questions bitterly emphasized by the anaphora in lines 28 and 29. With excruciatingly painful tone, he moves on to address Corinth.

The juxtaposition of “fair” (32) with “evil” (33) and “cancerous” (34), and the realization that he is not the child of Polybos mark Oedipus’s disillusionment of his past. Finally, Oedipus addresses the symbolic crossroads where the fateful murder of Laï¿½os took place. Oedipus directly confronts the crossroads, “can you remember / the unspeakable things I did there, and the things / I went on from there to do?” and in turn, confronts himself (39-41). The beastly and graphic personification of the roads drinking his father’s blood places the crossroads in an active position in the killing of Laï¿½os. The crossroads in such context no longer stand for the freedom of choice but the power of fate and prophecy. Crying out “thrice miserable!” Oedipus once again alludes to the misfortune brought upon him at the three crossroads (14).

Oedipus depicts fate as a monstrous thing because it has been unkind to him. He makes little mention of the gods in this speech. Instead, he focuses on his family. “My own blood spilled by my own hand,” Oedipus emphasizes the dear cost of his father’s life due to his hubris and ignorance by calling Laï¿½os’s blood his own (39). In section three Oedipus calls out, “O, marriage, marriage!” (42). He reviews the making of his family and stops in an abrupt caesura in line 44, “act performed by the son in the same bed-” because it is too painful to think of. Incest, as Oedipus declares, is “the last evil / that can be known by men: no tongue can say / how evil” (48-49).

Oedipus’s marriage with his mother Iocaste proves to be a fatal sin. “The net of incest” creates a vivid image illustrative of the entangled, complicated blood relations (45-46). The list of relations that sprang from incest, “mingling fathers, brothers, sons, / with brides, wives, mothers,” follows immediately to complement the image of “the net of incest” (45-46). It further exemplifies the utter disgust that wells up in Oedipus upon the thought of marriage. At the height of his emotional outcry, Oedipus sways between ambivalent feelings of staying alive and begging for death because of the immense shame.

Commentary on a Speech by Oedipus from Oedipus Rex. (2020, Jun 01). Retrieved from https://studymoose.com/commentary-speech-oedipus-oedipus-rex-2952-new-essay 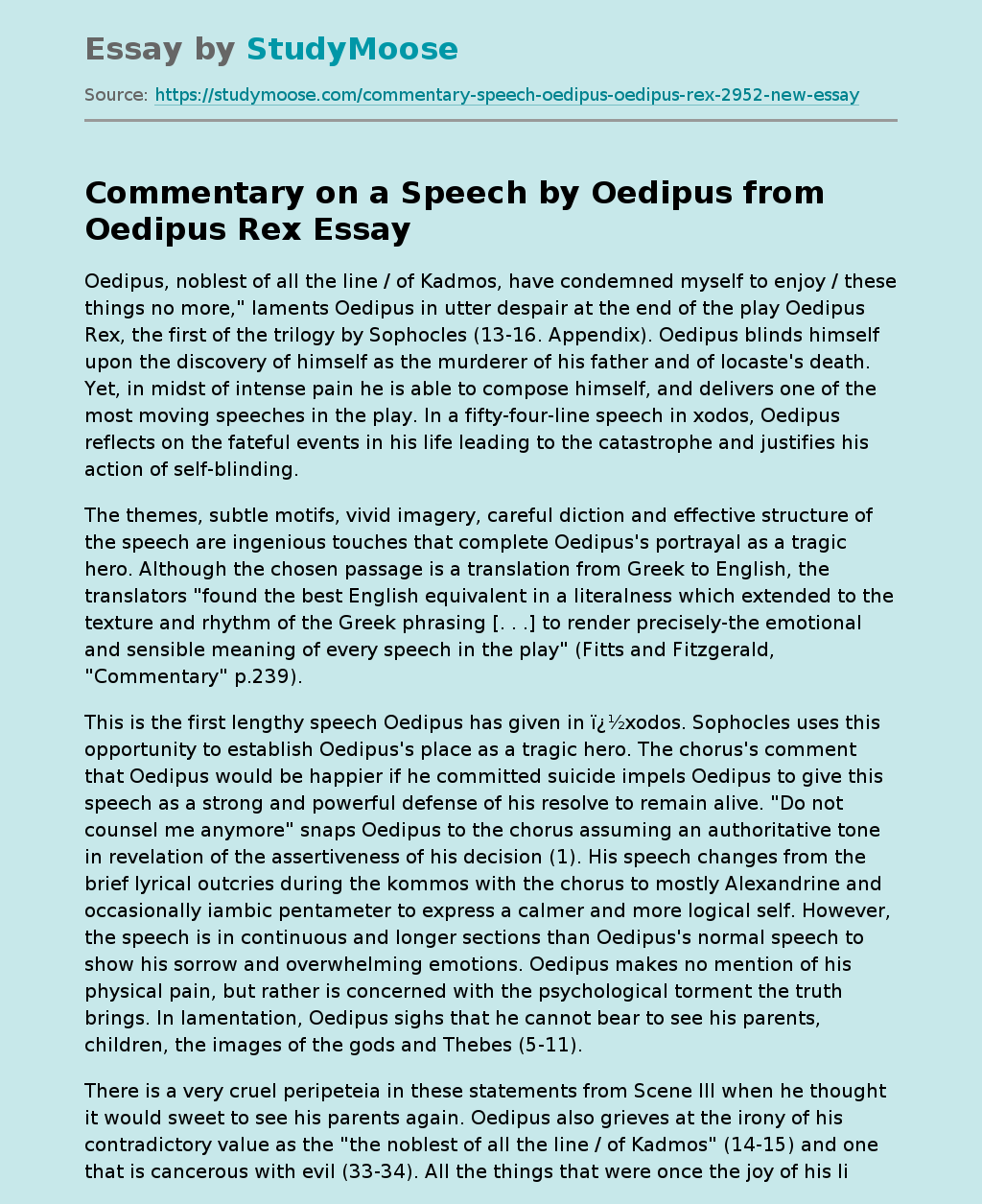