Commentary on the poem "Barbie Doll" by Marge Piercy

The poem “Barbie Doll” deals with the life of a girl who had a plastic surgery. It is divided in four paragraphs which describe the life of the girl chronological.

Describing the childhood of the girl the first chapter of the poem wants to emphasize how early girls are pushed into the role of motherhood and femininity. The girl’s first presents are dolls which are able to urinate (“…and presented dolls that did pee-pee”). Those dolls are the first confrontation with her later task of being a mother.

Don't use plagiarized sources. Get your custom essay on
“ Commentary on the poem “Barbie Doll” by Marge Piercy ”
Get custom paper
NEW! smart matching with writer

Furthermore she gets a miniature oven which is connected to her later task of working in the kitchen (“…and miniature GE stoves and irons”). I addition to that she gets her first beauty products. (“… and wee lipsticks the color of cherry candy”) This is her first confrontation with beauty and sexuality. Those presents push the girl into a role which connects femininity with motherhood, domesticity and beauty.

The peot starts giving reason for her plastic surgery already in the first paragraph.

After adopting this role the girls is very offended when a classmate called her ugly (“…You have a great big nose and fat legs.”)This is a very important sentence of the poem because this is the main reason for her plastic surgery.

The second paragraph shows that the society pushed her succseful into the role of a stereotype woman. Therefore she has a quite low self-estimate because she does not fit this steriotype. She is a healthy intelligent girl but she keeps on apologizing for her outer appearance because she does not fit the stereotype of a beatiful woman ( “She was healthy, tested intelligent…”;”She went to and fro apologizing”;”possessed strong arms and back”).

Furthermore she has a abundant sexual drive, which is not satisfied in her opinion because of her outer appearance (“…abundant sexual drive and manual dexterity.”)The last line of the second paragraph is irony. It does not say how she is seen by the rest of the world but how she sees her self (“Everyone saw a fat nose on thick legs”). This sentence is connected to the last sentence of the first paragraph. It shows how she adopted her classmates point of view about her body. This emphasizes her very low self-esteem.

The third paragraph emphasizes her efforts to become beatiful and sexual satisfied. The first sentence of this paragraph shows what she’s told to do in order to satisfie her abundant sexual drive. (“She was advised to play coy, exhorted to come on hearty, exercise, diet, smile and wheedle.”) Using imagery of a turning off fan belt the poet emphasizes how fast this efforts achieved the oppsite ( “Her good nature wore out like a fan belt”) Her last effort is to have a plastic surgery. (” So she cut of her nose and her legs and offered them up”). Using this kind of formulation ( “… cut off…offered them up”) this plastic surgery sounds like a sacrificial offering. And it is meant to sound like that because it is an offering to the society. She offers her own body in order to please other people.

The last paragraph shows her achievments of her efforts and that she is still not happy. The first sentence describes how close she looks to the stereotype. She really is a symbol for beauty now. (” … a turned up putty nose, dressed in a pink and white nightie”) In her opinion everybody sees her as a beautiful woman now.

But the poet put a question mark in that sentence because beauty is still a question of taste. She will never make everybody happy! (” Doesn’t she look pretty? Everyone said.”). With her new beauty she gets sexual satisfied ( “Consummation at last.”) Finishing the poem with a ironic sentence the poet wants to show that she is not necessarily happy now . (” To every woman a happy ending”) Furthermore she adopts the girl’s story to the rest of the female world in order to convey that plastic surgeries are not necessary. And they do not necessarily make you happy because it is not good to give up the own body in order to fit in any kinds of stereotypes.

Commentary on the poem "Barbie Doll" by Marge Piercy. (2017, Nov 15). Retrieved from https://studymoose.com/commentary-on-the-poem-barbie-doll-by-marge-piercy-essay 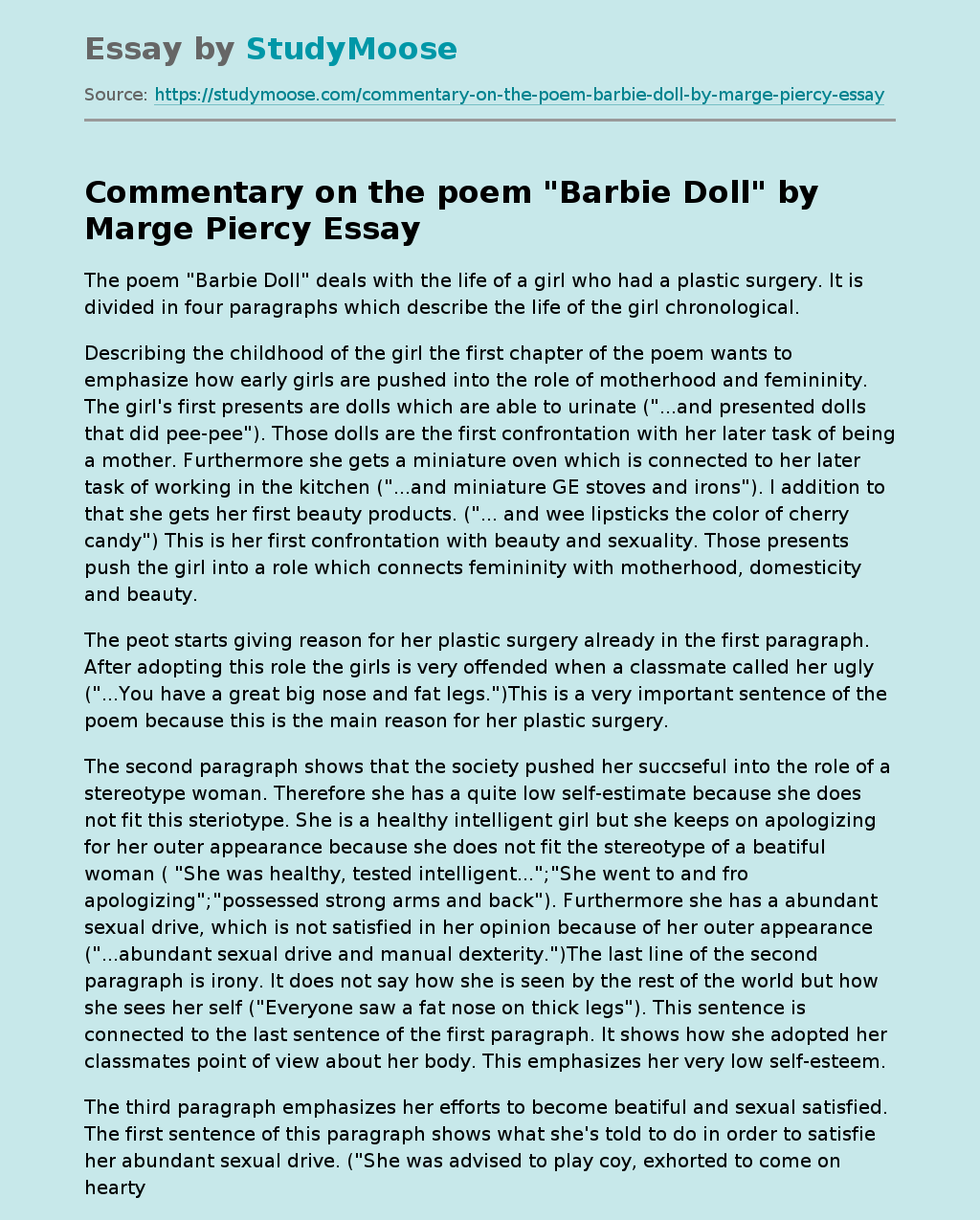