Commentary on Donne's "The Sun Rising"

John Donne was possibly the greatest metaphysical poet of the seventeenth century, and his greatness has endured. His blending of the intellectual with the emotional, and the spiritual with the physical has made him one of the most admired poets in the twentieth century. His work may be roughly divided into three groups1. The first group contains profane, often cynical love poetry in which women are treated as objects. The second is also composed of love poems, but these focus upon the spiritual aspects of love, as well as on the physical.

Don't use plagiarized sources. Get your custom essay on
“ Commentary on Donne’s “The Sun Rising” ”
Get custom paper
NEW! smart matching with writer

In these poems, the lovers are united and human love is shown in its purest form. The third group comprises Donne’s religious works, which deal exclusively with spirituality, divinity, and faith in association with religion. The Sun Rising, with it’s assertion of the power of love over time and space, and the spiritual unity of the two lovers, belongs clearly to the second group. In The Sun Rising Donne proudly vaunts the power of love in two declarations: love creates its own time and establishes its own space.

The first declaration is stated in the first stanza: “Love, all alike, no season knows, nor clime, nor hours, days, months, which are the rags of time. ” The second declaration is presented first in the second stanza, “All here in one bed lay”, then repeated and clarified in the third stanza when Donne says ” the world’s contracted thus” in their love. When these two declarations are taken together, Donne’s message becomes clear: if neither time nor space pose a threat to true love, it follows that true love is all powerful, and love the only true reality.

Paradox, hyperbole, and imagery play an important part in The Sun Rising, and indeed, in all of Donne’s poems. Paradox abounds in The Sun Rising, and is essential for Donne to fully express his thoughts, which in themselves are paradoxical: love is not subject to time or space. The first paradox in The Sun Rising is “unruly sun”. Of course calling the sun “unruly” is a blatantly obvious paradox, as time itself is derived from the regular movement of the sun.

This is the first of many paradoxes, which turn the world upside down, reverse our perceptions, and shock us into recognition of deeper truths. Solipsism” is turned on its head because it is the lovers who become the center of the universe, with the sun acting according to their wishes. Hyperbole and imagery are closely linked together in this poem, and Donne uses hyperbolic statements in order to create more vivid images, especially of the object of his love. These exaggerated images, such as “If her eyes have not blinded thine”, use hyperbole in order to mock courtly love poetry, which used such clichi??s as “her eyes outshine the sun”.

Feigning acceptance of these clichi??s, Donne evokes an image of the woman he loves. A woman whose eyes outshine the sun, who is the only true treasure the earth contains, and who is, for Donne, the world itself: “She’s all states”. Donne wittily parodies the melodramatic conventions of courtly poetry, but he also uses hyperbole as a double negative in order to truly describe his loved one. This imagery and hyperbole convey conveys an emotional if not factual truth, and thus expresses the experience of love.

The Sun Rising express Donne’s thoughts as a physical and emotional experience, rather than just an abstract idea. In the poem, Donne creates a sense of scene. In the morning, lying in bed next to his love, Donne is awakened by the sun streaming through the curtains. The poem consists of the tirade which the Donne delivers against the sun, annoyed at having his happiness disturbed. The tone of his discourse changes from arrogant and contemptuous to magnanimous, however, as Donne begins to affectionately describe the object of his love.

The poem culminates in a generous gesture on the part of Donne, who invites the sun to facilitate his duties by simply shining on them, and thus warming the whole world. “Shine here to us, and thou art everywhere. ” With characters, passage of time, development, etc… , this poem bears a close resemblance to a play. This play deals with what, according to Donne, is the most profound and spiritual centre of our live: love. Paradoxically, this play happens to be a light comedy.

Commentary on Donne's "The Sun Rising". (2020, Jun 01). Retrieved from https://studymoose.com/commentary-donnes-sun-rising-new-essay?post 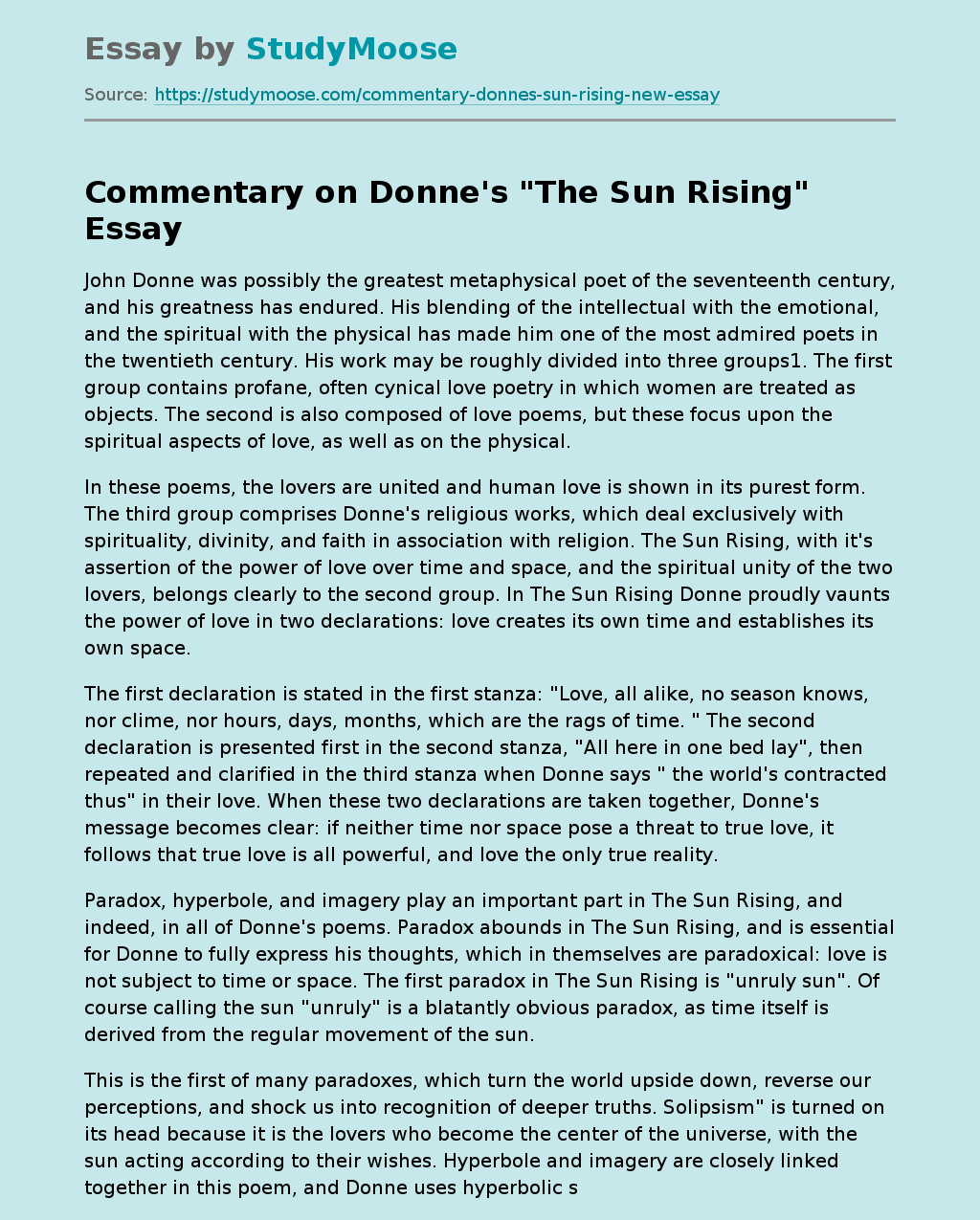