"Coming of Age in Mississippi" by Anne Moody

The life of Anne Moody and the events of the civil rights movement are chronicled in her autobiography and a book called “Coming of Age in Mississippi” which was published in 1968. In this essay, this autobiography will be drawn upon and her involvement in the movement will be analyzed. The thesis for the essay is that “Anne Moody’s change in perspective about the movement brought about a shift in the civil rights movement”.

Anne Moody was born in the Jim Crow era in Mississippi where she was also raised as a kid.

Don't use plagiarized sources. Get your custom essay on
“ “Coming of Age in Mississippi” by Anne Moody ”
Get custom paper
NEW! smart matching with writer

The details of racism, patriarchal control, injustice and her involvement with grassroots organizations such as Congress of Racial Equity (CORE), National Association for the Advancement of Colored People (NAACP) and the Student Nonviolent Coordinating Committee (SNCC) have been documented in her autobiography. Moody, as a graduate of Tugaloo College, reflects upon her participation with local leaders and other Tugaloo students in order to protest against racial injustices.

Her narrative includes a piece of history, which comes from meeting many leaders and witnessing many unforgettable movements, which otherwise would never have been documented or told. Anne lends her story and voice through narrating events such as Emmett Till’s lynching, Medgar Evers’s assassination; sit-ins and rallies in which she fully participated (Page, 2007).

Factors Influencing Moody to become Involved in the Movement

Anne Moody witnessed the worst form of racism and discrimination in Mississippi in the era of Jim Crow. However, the biggest factor that contributed to Anne’s involvement in the movement was that she was a daughter of poor African American family and a female.

Her father left the family when she and her other 8 siblings were still very young. Moody’s mother supported her nine children through restaurant work and domestic chores. Moody attended a segregated school in Centreville in which she seemed to be a bright student despite her impoverished conditions. Anne witnessed a lot of discrimination against women and the African Americans in the area where she lived since her childhood. Being and African American and moreover a female, she experienced a lot of discrimination and racism herself. She was active throughout her college life which forced her to work for the independence of women from discrimination and get them voting rights, to create a history for the Southerners and give the African Americans the freedom they deserve and await (eNotes.com, 2010).

Change in Moody’s Perspectives about the Movement Overtime

Moody started to work in the fourth grade as she was the eldest in her siblings and her mother could not earn much for the nine children. She won basketball scholarship at junior college and an academic scholarship to Tugaloo College from where she graduated in 1964. Anne Moody became an activist in the civil rights movement while she was at Tugaloo College and maintained involvement with CORE, NAACP and SNCC. She was one of the three youngsters in 1963 who staged a sit-in at a segregated Woolworth’s lunch counter in Jackson. In the same year, Moody also took part in a march on Washington DC (eNotes.com, 2010).

As Moody learned that she was both an African American and a woman, she was quick to adapt to the situations which would have been fatal. She did not allow anyone to dominate her and did not accept being an inferior African American woman to any white person or men. She never became satisfied from or accustomed to the mandated subordination due to the white people in the US. Instead, her participation in the civil rights movement expanded when she began to challenge the myths, authorities, false heirs of superiority and assumptions in the society. Her perspective about the civil rights movement changed when she began to question her assumed position and role in the society in opposition to the other white people. She also began to ask other African Americans about their fulfilling roles and why they did not react against the white racists and discrimination (Page, 2007).

As Moody continued to mature, her perspective about the movement changed when she learnt about the murders, the lynching and the threats to the lives of those African Americans who reacted to the impudence and rebellion that Anne has awaited to demonstrate (Page, 2007). These crimes not only disgusted her but also they stopped her from reacting or taking any actions as she writes in her book on page 155 “Negroes are being killed, beaten up, run out of town by these white folks and everything. But Negroes can’t even talk about it” (Moody, p.155). Moody constantly learned about the differences between expectations and behaviors and the rules governing the whites and the African Americans. She sought to move out of Mississippi as she never accepted the Jim Crow system. She moved out to New Orleans and Baton Rouge to live with her relatives. She expected to find equality and more freedom there but was disappointed there as she again encountered racism and prejudices. She learnt that the reality is that these flavors of discriminations and racism are present all over the Southern states (Page, 2007).

When she returned to her home state Mississippi, she learned that it was even more difficult to live in the state than before as the fear of losing own life and the life of loved ones was pertinent in the African Americans. At this point in time, Anne Moody became fed up of the differences shown by the African Americans, her community, her friends and her family. She decided to step up and make a difference as she could no longer be afraid and inactive. She notes in her autobiography “Courage was growing in me too. Little by little it was getting harder and harder for me not to speak out” (Moody, p.163). This led Anne to attend a greater number of meetings with the city leaders, other Tugaloo students and professors, and activists. She participated in a number of marches, riots, meetings, rallies, sit-ins and many other activities in order to fight and plead for equal rights for all the African American citizens (Page, 2007).

Reflection of Moody’s Change in Perspective

In the 1950s, the major strategies involved in the civil rights movement were litigation and lobbying in order to abolish discrimination against the African Americans. However, in 1955, the black citizens became frustrated because of the gradual approaches of the state and federal governments to implement desegregation. The other reason for this frustration was the massive resistance from the proponents of voter suppression and racial segregation. Most of the actions that were taken in the 1950s and the early 1960s were nonviolent resistance and indirect actions by the African Americans.

However, these actions were not voiced until the mid and the late 1960 when the civil rights movement took major steps such as the march on Washington and speech by Martin Luther King. In the past, it was difficult for the African American leaders to cooperate and work on a combined purpose. The strategy of the civil rights movement emphasized more direct actions and mass action replaced litigation. Therefore the civil rights movement reaped no results in the 1950s and early 1960s. However, when the African Americans united and the people felt courageous, then only results such as nullification of the legal article of “separate but equal”, banning of segregation, banning of discrimination in employment practices in 1964 and restoring of voting rights. These broader shifts in the civil rights movement from the 1950s to 1960s hence reflect the changing perspective of Moody’s activism. She was active at first but then was discouraged by the lack of cooperation of the blacks and the height of murdering and killings of African Americans by the white people. Then she again became courageous and became active with participation in the riots and other strategies.

Hence the change in perspective of Anne Moore about the movement was clearly reflected upon the broader shifts in the civil rights movement from 1950s to the end of 1960. The movement was taken by storm because of the mass action of the African Americans which can also be reflected by Moody’s growing courage when she returned to Mississippi. Although Moody became disenchanted with the movement earlier when she moved out to another state, but she became an active member of the movement afterwards as the perspective of civil rights movement also shifted.

"Coming of Age in Mississippi" by Anne Moody. (2019, Aug 19). Retrieved from http://studymoose.com/coming-of-age-in-mississippi-by-anne-moody-essay 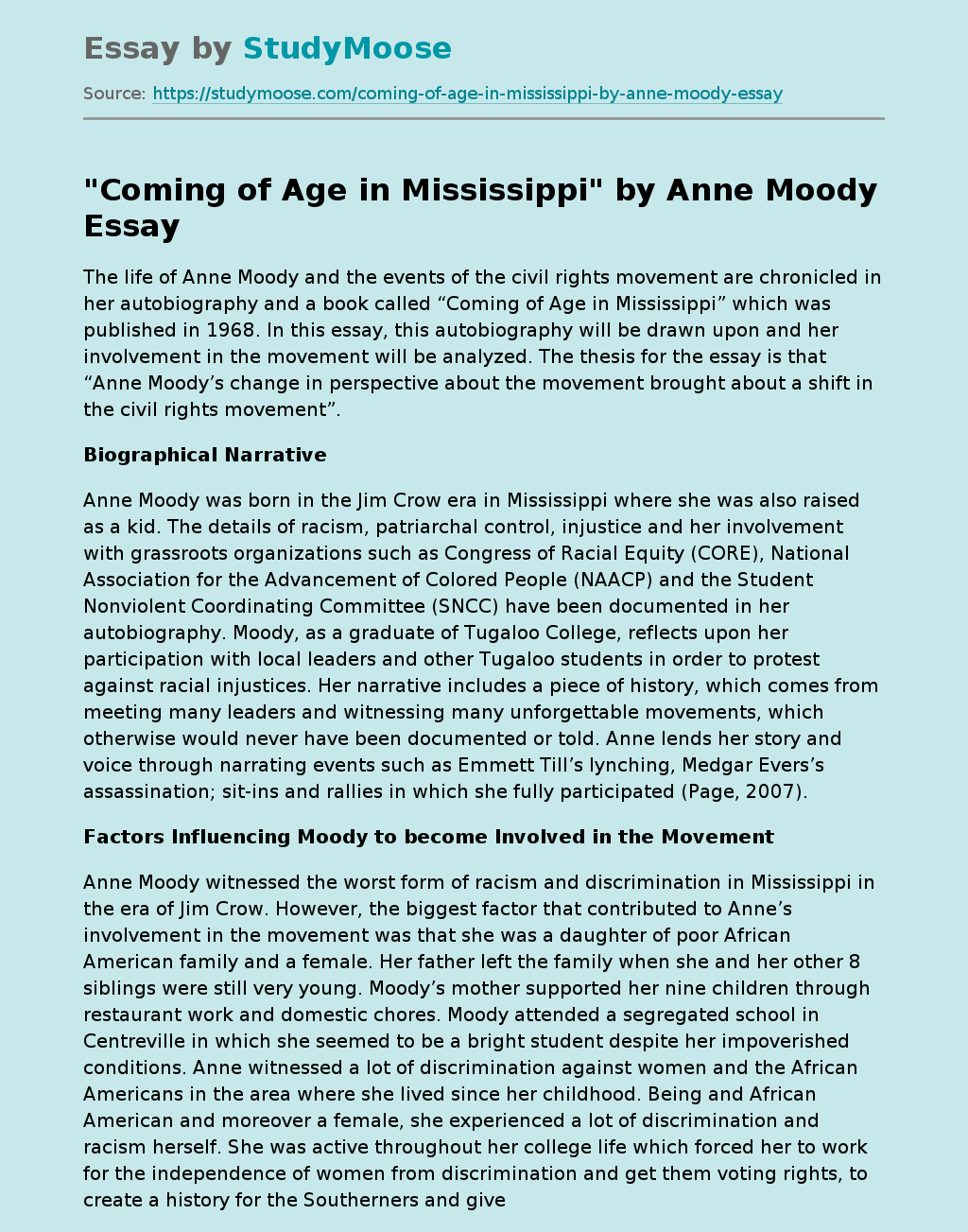