Comedy of Manners, a witty, cerebral form of dramatic comedy depicts and often satirizes the manners and affectations of a contemporary society. A Comedy of Manners is concerned with social usage and the question of whether or not characters meet certain social standards. Often the governing social standard is morally trivial but exacting.

The plot of such a comedy, usually concerned with an illicit love affair or similarly scandalous matter, is subordinate to the play’s brittle atmosphere, witty dialogue, and pungent commentary on human foibles.

The Comedy of Manners, which was usually written by sophisticated authors for members of their own coterie or social class, has historically thrived in periods and societies that combined material prosperity and moral latitude.

Such was the case in ancient Greece when Menander (c. 342–c. 292 BC) inaugurated New Comedy, the forerunner of comedy of manners. Menander’s smooth style, elaborate plots, and stock characters were imitated by the Roman poets Plautus (c. 254–184 BC) and Terence (186/185–159 BC), whose comedies were widely known and copied during the Renaissance.

One of the greatest exponents of the comedy of manners was Molière, who satirized the hypocrisy and pretension of 17th-century French society in such plays as L’École des femmes (1662; The School for Wives) and Le Misanthrope (1666; The Misanthrope). In England, the comedy of manners flourished during the Restoration period. Although influenced by Ben Jonson’s Comedy of Humours, the Restoration Comedy of Manners was lighter, defter, and more vivacious in tone.

Playwrights declared themselves against affected wit and acquired follies and satirized these qualities in caricature characters with label-like names such as Sir Fopling Flutter (in Sir George Etherege’s Man of Mode, 1676) and Tattle (in William Congreve’s The Old Bachelor, 1693).

The masterpieces of the genre were the witty, cynical, and epigrammatic plays of William Wycherley (The Country-Wife, 1675) and William Congreve (The Way of the World, 1700).

In the late 18th century Oliver Goldsmith (She Stoops to Conquer, 1773) and Richard Brinsley Sheridan (The Rivals, 1775; The School for Scandal, 1777) revived the form.

The tradition of the elaborate, artificial plotting and epigrammatic dialogue was carried on by the Anglo-Irish playwright Oscar Wilde in Lady Windermere’s Fan (1892) and The Importance of Being Earnest (1895). In the 20th century the Comedy of Manners reappeared in the witty, sophisticated drawing-room plays of the British dramatists Noël Coward and Somerset Maugham and the Americans Philip Barry and S.N. Behrman 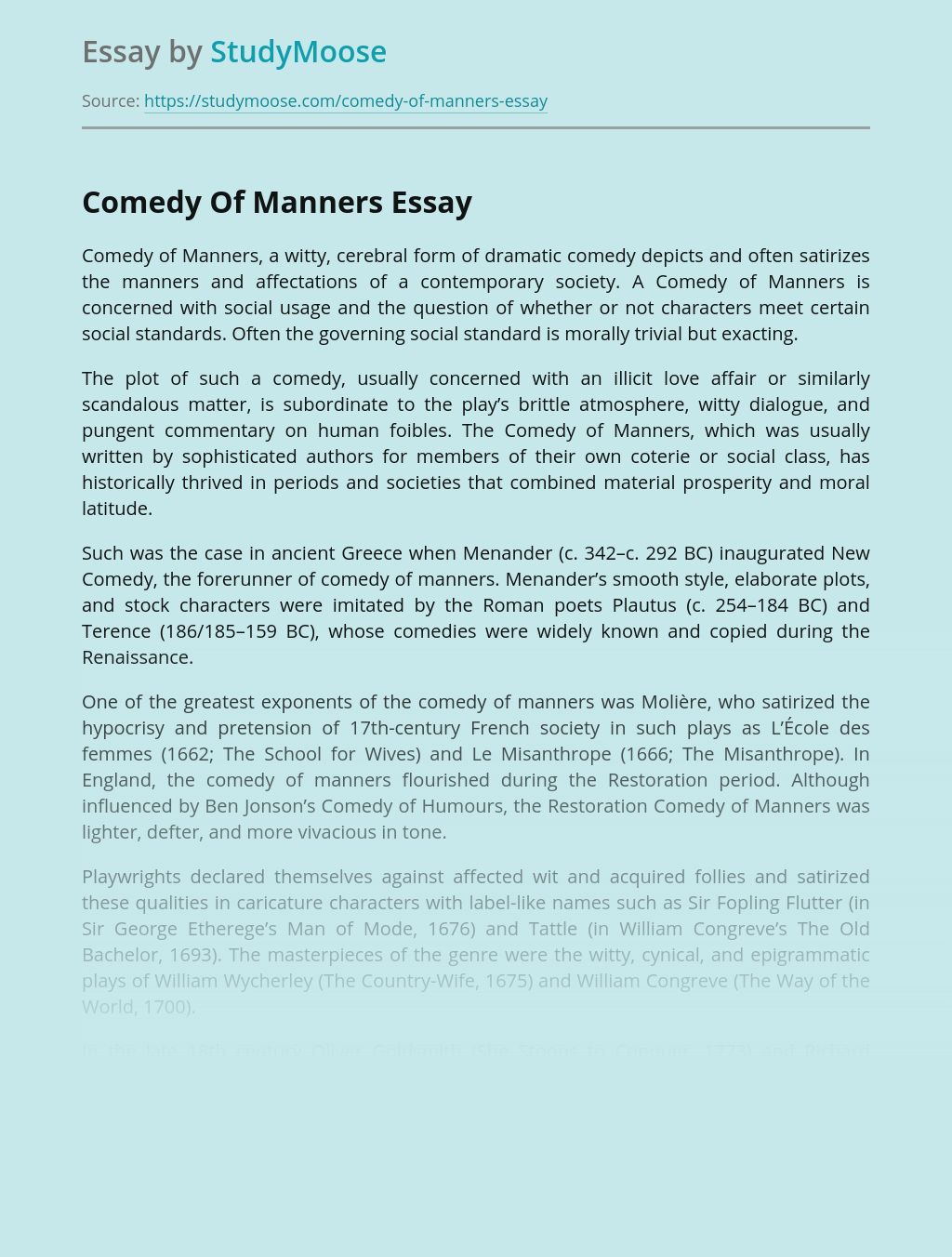