Colorism is an issue amongst African Americans that is slowly disunifying the culture. The idea that is constantly reiterated in the African American community is that if you are light skinned you have a better job with more income, more successful, have more relationships, and are deemed less of a threat, essentially living the “best of both worlds”. If are darker skinned you are jobless or at a job that is not moving you into the future, less successful, passed by a potential mate, and is labeled as a common crook.

The ideas about color pigmentation in the African American community all goes back to the original argument made numerous of times: “White is good, Black is bad”. Slavery is a primary reason why African Americans have this state of mind. During this cruel and demoralizing era, African Americans were subjected to beatings, hard labor, and for some of the women, rape. The results of these malicious rapes led to pregnancy and the women bearing children of the masters.

The offspring of the women were still slaves but were offered an education and lived in the master’s house because of their lighter skin.

The media frequently reinforce these ideas by what is shown on television. On the news, it is always the dark African American man who is the subject for a manhunt for committing certain crimes. There are just as many white people committing the same crimes yet it is not news because it is not what the media wants the general public to believe.

They are also seen as easier to get along with. The continued success of the light skinned African Americans has created a prejudice against lighter skinned individuals in the culture. Dark skinned males and females are raged because of the fact that they get hired for good jobs. Dark skinned females are mad at lighter skinned females because they are not approached as much as they are. This is a real issue because it is causing bitterness towards one another I the African American culture.

When a person looks at a color it creates a certain feeling within them. In Ellis Cose’s Rage of a Privileged Class, color plays a very significant role. Cose explains that because of color a white man is likely to be helped more, quoted lower on purchases, shop without harassment, and offered more jobs as opposed to an African American who receives the exact opposite. According to psychology researchers, “white represents innocence, purity, clean, and good… black symbolizes death, mystery, evil characters, and criminal activities”(Wu 1).

Knowing the true meaning of colors explains why many African Americans of a darker skin color are less favored than those of a lighter one. The history of this favoritism for lighter skinned individuals can be dated all the way back to the days of slavery. Slave masters in this era were cold hearted human beings. They would rape unsuspecting female slaves at their own leisure. The outcome of these rapes led to the pregnancy and birth of other slave babies. The children of the salves and masters, often called mullatos were treated better than all the slaves. 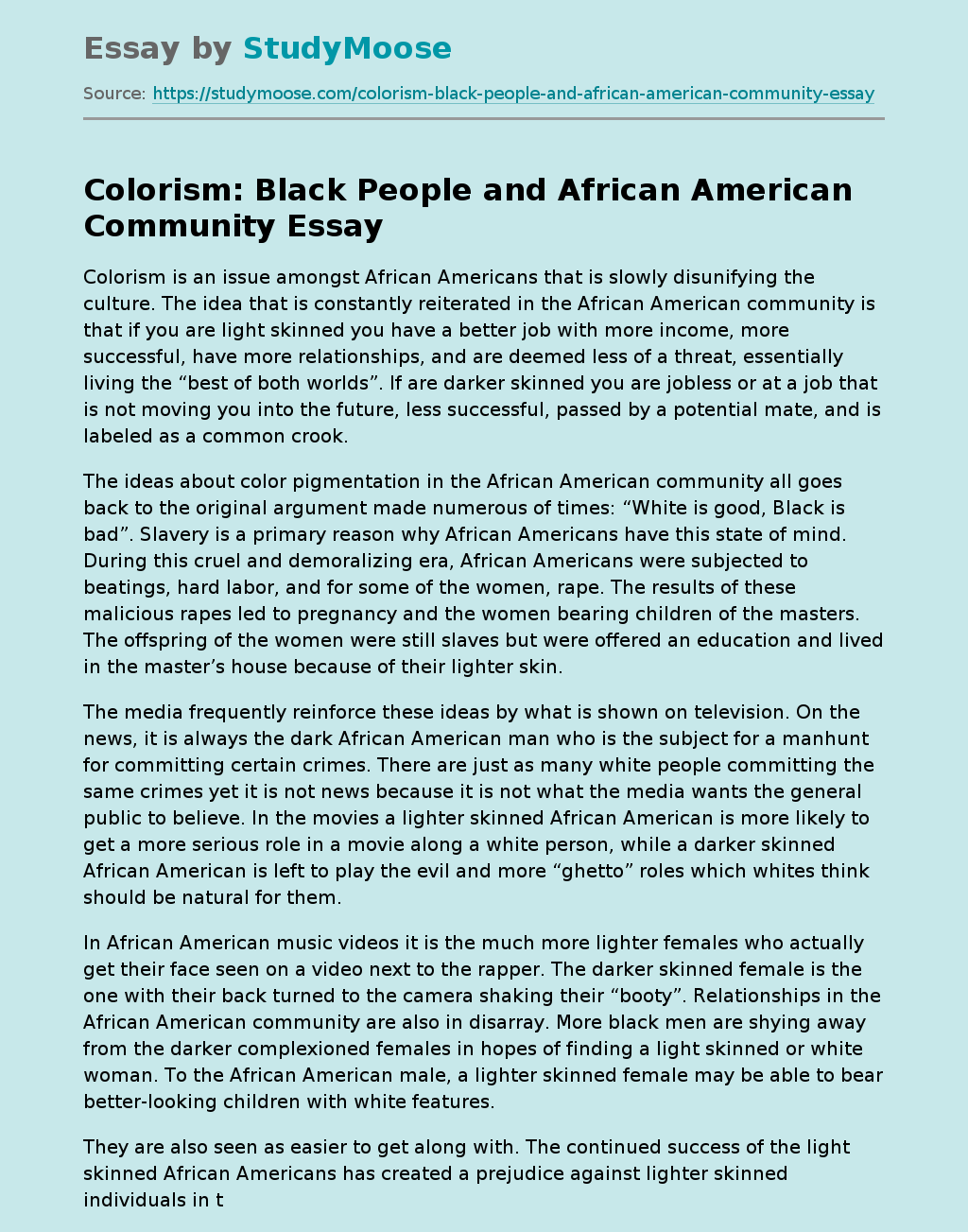