Written in 1982, it is clear several modern movements affected Walker’s novel, The Color Purple. The impact of the Civil Rights Movement which took place during the 1950’s and 60’s compelled racial integration throughout the United States and thus in a novel written in its aftermath it is inevitable that Walker concerns her novel with political issues. I believe through using the character of Celie’s experiences and encounters with the world as her pivot Walker explores a legacy of slavery, racial oppression and poverty, particularly for the non-mainstream majority groups such as black people, therefore making it a successful political novel.

Don't use plagiarized sources. Get your custom essay on
“ The Color Purple is too concerned with the personal experiences of Celie to be a successful political novel ”
Get custom paper
NEW! smart matching with writer

The stimulus statement suggests that the method Walker employs buries the public issues in the private emotions of the protagonist, Celie. The extent to which the novel is a successful political one is often open to debate, however, I believe it is through raising political issues, The Color Purple is able to look at topical areas more in line with every day life, and humanity in general.

This piece of twentieth century American literature addresses political issues clearly influenced by the Civil Rights and Feminist Movements. Through engaging the reader by using the main character as her catalyst for topical issues such as domestic violence, patriarchy, relationships, and the search for personal freedom, Walker manages to manifest all the above through the everyday personal experiences of Celie.

The Color Purple is graphic from the first pages. Patriarchy, men’s violence and power are probably some of the most important issues raised within the novel.

Walker delves into immense detail to describe accounts of how Celie has been abused “He clam on top of me and fuck and fuck, even when my head bandaged…She ugly”. Women are used not just for their bodies and it is a main stream idea to have men be sexually promiscuous and women be sexually passive. The violence aspect is presented in a variety of ways, most predominately rape itself. Walkers exploration of a patriarchal society is at its most powerful in her portrayal of Celie’s rape by her father .The book opens with this image, which eludes you to the rest of the book when it states plainly ” …he grab hold of my titties. Then he push his thing inside my pussy.

When that hurt I cry…You better shut up and git used to it”. Compelling and appalling as it may seem, this is a scene where there is violence against women. This goes along with the modern world women are raped by someone they know. Celie’s only choice is to submit or be destroyed and it is through the epistolary style of the novel which is not only powerful and striking, that it gives voice to common rather than individual experience. Walker’s portrayal is mirroring the reality of the modern world as the portrayal of youth and innocence is crushed by adult male brutality. Whilst not all rapists one theme of male violence and oppression of women is repeated in male characters in The Color Purple such as Albert and to a lesser extent Harpo; “she under my daddy thumb. Naw, she under my daddy foot. Anything he say, goes. She never say nothing back.” Rape is used as an instrument of power and it is through this Walker brings are attention to the politics of power pertinent to her time- upon which men were the dominant sex.

Celie holds on to a picture of Shug Avery (the woman she lets her husband have an affair with) because she is so beautiful. These are ideals seen in our culture as a whole. Women hold onto pictures of women in magazines and posters with the idea that the airbrushed picture is attainable and amounts pressure on what the women of the world need to look like, “I’m not as pretty or as smart” .This is played on throughout the book as well as in our culture. “Women of the world today need to be attractive to be someone, or so it seems. Celie is a barefoot and pregnant housewife living her fantasy of a singer that is attractive” CRITIC. The epitome of the quotations shows the sexuality associated with a women’s body is “right down there in your pussy is a little button that gits real hot when you do you know what with somebody”.

Female sexuality as a whole is discounted and seen as a negative portrayal as are lesbian acts deemed unmentionable. Celie’s growth would not happen without the influence of the women she meets, and their close friendships allow them all to grow and develop. This sisterhood represents the means by which women can be strong and to help each other if they wish to achieve anything. “Liberation can only come when a person learns to accept what they are, and fight against restraints they may be faced with. Shug Avery’s strong nature, her ability to stand up and perform, represents the black people who fought against segregation on public buses, in restaurants, to achieve equality.” CRITIC. This statement echoes my belief that it is through Celie’s experiences and perhaps more significantly, Walker’s that allow political issues to be brought to the fore.

The Color Purple is a bildungsroman novel which charts the growth of protagonist Celie through letters; primarily from her to God, but later to her sister Nettie. The epistolary nature of the narration is frank and confessional; “I don’t write to God no more, I write to you…he give me a kynched daddy, a crazy mama, a lowdown dog of a step pa and a sister I probably wont ever see again.” Celie’s development is shown from her own perspective. Walker takes her protagonist on a journey towards self-actualization. The need for love, social acceptance, affection and intimacy from others is addressed. Then the need for self-esteem which includes confidence in oneself and respect from others to reach self-actualization, can be seen through Celie’s growth. In the time ‘The Color Purple’ is set The Women’s International League for Peace and Freedom (WILPF) began a policy of sending letters to those they wished to listen, thus evoking their confidence as women in a time of war and male politics. I believe I can link this in with Walker’s characterisation of Celie, as through writing letters The WILPF gained voice and liberty, Celie also becomes more independent. I believe that Celie becomes more confident within herself through her letters.

The Color Purple is too concerned with the personal experiences of Celie to be a successful political novel. (2020, Jun 01). Retrieved from https://studymoose.com/color-purple-concerned-personal-experiences-celie-successful-political-novel-new-essay?post 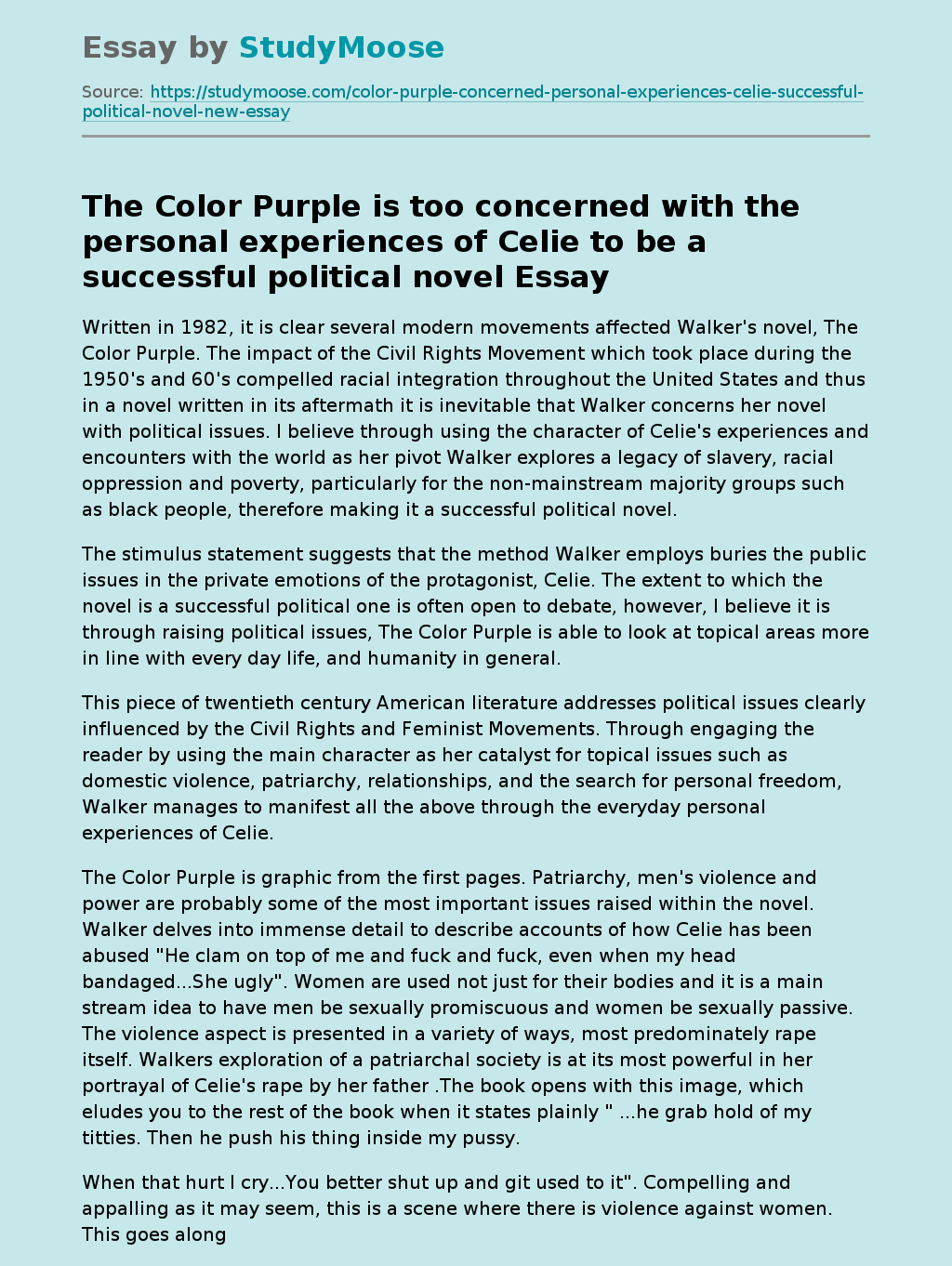