Cold War and the Rivalry Between Iran and Saudi Arabia

The middle east is a place of many conflicts, which have lead to divides between surrounding areas and leaders. The divides and crises have lead to repeating wars and struggles that feed off of each other.

One of the major conflicts in the middle east right now is the civil war in Yemen. Yemen was in the process of transitioning politically after an uproar and the new President could not handle everything that was being thrown at him. President Abdrabbuh Mansour Hadi was unable to handle attacks from surrounding places, movements from within, corruption, unemployment, and food security.

Don't use plagiarized sources. Get your custom essay on
“ Cold War and the Rivalry Between Iran and Saudi Arabia ”
Get custom paper
NEW! smart matching with writer

He was weak as a new leader and Houthis took advantage of him and Yemen, the Houthis took control of Sadda and surrounding areas. This attack continued to destroy Yemen and its major cities. Therefore, a war broke out involving many more Arab states. The Arab states have been fighting to restore Yemen’s government and defeat the Houthis. The attack has caused many casualties and displacements in Yemen.

Many foreign countries are involved in the war and have supplied the Saudi-led coalition with weapons and insight. On the other hand Iran is believed to be helping Houthis and supplying them with arms and military advisers. Therefore, the war in Yemen is believed to have an impact on Saudi Arabia’s “cold war” with Iran.

The “cold war” between Saudi Arabia and Iran is another major conflict happening in the middle east. Saudi Arabia shares a border with Yemen and was worried about Iran’s expansion.

Iran now controls four Arab capitals. Saudi Arabia is also fighting with Bashar al-Assad’s government also controlled by Iran. All of these factors have lead to airstrikes and a war between Saudi Arabia and Iran. The cold war has turned into an actual war threatening many surround countries, which could cause more civil wars between tight-knit areas. Saudi Arabia is supported by Egypt, Bahrain and the United Arab Emirates, while Iran has close ties with Iraq, large parts of Lebanon and Syria’s current leadership. The middle east is a place of conflict where one misfortunate event leads to many more. This is shown by the war in Yemen having an influence on the “cold war” between Saudi Arabia and Iran.

I would advise my leaders to proceed with caution and align themselves with the leaders who are fighting for global peace. Also, I would advise them to keep the war short because the shorter the war the less of a chance it leads to more conflicts. As the war drags on and involves more and more countries it leaves in its aftermath more death, starvation, displacement, homelessness, orphans, and physical damage to structures.

I would also advise them to contain some of the more involved and larger countries. For example, I would encourage my party to stop Iran from fighting. Stopping Iran would lead to fewer civil wars and wars within other areas. My goal would be to end Iran’s term in war in order to stop the domino effect. If a controlling country such as Iran can be put in its place then the smaller countries that have more at stake might have a chance to overcome the devastating effects of war. Ending the wars and conflicts in the middle east would get rid of the negative stereotype towards countries such as Iran, Iraq, Saudi Arabia, and Egypt. In my view this might be the beginning of bringing peace to the region. If each region would take a step back and try not to be the one on top, each country may begin to focus on their own issues and people which in turn, will start the process of lasting peace.

Cold War and the Rivalry Between Iran and Saudi Arabia. (2021, Mar 09). Retrieved from https://studymoose.com/cold-war-and-the-rivalry-between-iran-and-saudi-arabia-essay 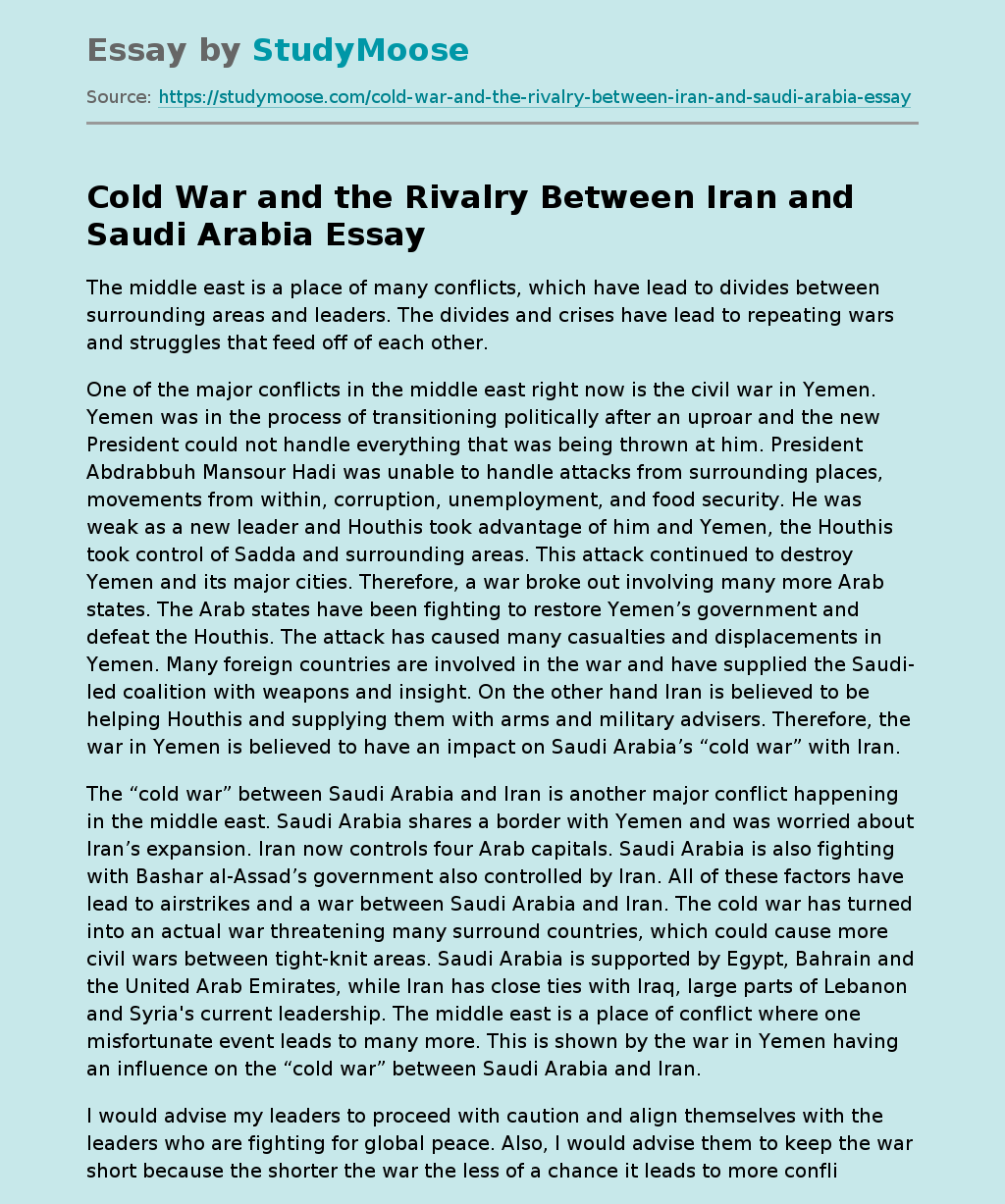