The sun was just about to set on the glorious New York skyline as Biff Loman opened the room’s dusty window. He looked on as he felt the final warmth of the sun’s rays in his face. A gentle breeze made its way through as Biff gazed into the crowd beneath him. As he turned away from the window, the sound of a radio from a nearby apartment drifted in, as a song began to play.

“There was a boy, a very strange enchanted boy; they say he wandered very far over land and sea…”

Biff Loman was a wanderer, he had still not found his purpose in life, he was lost and this desolation had brought him back home, to his parents.

Don't use plagiarized sources. Get your custom essay on
“ In Cold Blood – Creative Writing ”
Get custom paper
NEW! smart matching with writer

He was now trying to find that purpose which he had longed to find, in Bill Oliver’s office.

These four walls were an epitome of confinement to Biff Loman. He had just seen Bill Oliver, the man who was supposed to make everything right for him.

It was an opportunity for Bill to get a decent occupation and lead his life with purpose. Then one indifferent glance from Oliver as he passed Biff through the reception changed everything. As he leant back on the wooden chair the thoughts of Kansas came back to him. His desolation felt the same as it had only these were solid panelled walls instead of dull grey concrete.

A few months back, Biff Loman had stolen a suit from Boomerang’s, a black linen suit with gray stripes, a thing of such grandeur and class.

Biff had no need for the suit, like he had no need for the practice ball, the sneakers and countless other things which he had stolen throughout the years but all it took was one look and he had known that he wanted that suit. It only took a couple of minutes for the two eager store authorities to chase him through the busy store and pin him down which had led to his eventual arrest. A faint smirk formed on his lips as he stared into the decorative ceiling.

â “Good old Billy, he will make it all right. He will make me something, I will be worth something and I will stand for something. Yeah sure, he hardly looked at me but he is a busy man, he’s got stuff to do, things to take care of.” Biff thought to himself. The name “Bill Oliver” travelled in the vastness of his mind like an echo in the mountains.

Despite his usual pessimism, he wanted to believe. This time, he was willing to go out of his way so that he could make something of himself. This would certainly make his father, Willy proud and his brother, Happy would always be there to support him. In his mind’s eye, he caught a glimpse of his mother, her harmless face and that fragile smile drawn in his perception. He wanted to believe that in any moment now, Bill would open that wooden door and he would be face to face with the man and he would face what he would set his path straight.

Biff closed his eyes and managed to conjure up a smile; he slowly took a deep breath and exhaled like it was his last. His breath seemed to remind him of hope, a feeling of relief which he had never felt before. He foresaw the harrowing landscape of the glorious south where his heart longed to belong, towering hills like monuments overlooking the vast barren plains, the limitless sky watching over the endless ocean of land, like a mother looking over her new born child enclosed in her precious embrace. The shade of luminous gold in the palette of the sky, painted so delicately as the sun set its way to slumber in the western horizon, receding its rays and biding farewell to the world that stood before it.

Biff then remembered his father and that day in Boston. He remembered how he had opened the door and how it had changed every single fragment of his life. Biff had felt his heart sink to depths which he could not even comprehend. Biff witnessed the existence of another woman in his father’s life who seemed to be the object of his malicious desires. She was intoxicated enough to be unaware of what has happening before her, despite Willy’s pathetic attempts to conceal and condemn what Biff had clearly understood. As those moments passed, everything that Biff knew in his entire life seemed to fade away like dust in the blowing wind; his father was a phony, a filthy deceptive liar who lived life with such false purpose.

He was nothing but a phony who built these magnificent aspirations of castles to Biff while he himself was scampering in dirt like a helpless animal. How could Biff even aspire these false hopes of his father who had deceived him? He had always loved the old man for who we was beneath, but he despised what he had become from the very depths of his heart that brought him to tears. His father was a symbol of everything that Biff dreamed would die. This cruelty of conscience made Biff realise that this was yet another lie, another dream that his father had dreamt for him.

ââHe began to perspire heavily as he tried to drift away from these thoughts. His efforts once again were in vain. He felt so adamantly numb, unable to even move his limbs; unable to even command his own physical body to do so with his mind. This was unreal to him, he had never felt such a burden in his shoulders, such a pain in his heart and such a strain in his body. He felt the tendency, the urgency to leave and yet his attempts remained futile as an unanswered call. He clasped his head to his hands in such solemn despair. “What have I become, what am I doing here…” His whispers seemed to infuriate him and mock his inability to leave. He felt painful discomfort with the lump in his throat and he began to choke on his words. “I am not a goddamn salesman, I never was…”â

“And then one day, a magic day he came my way and while we spoke of many things, fools and kings, this he said to me…”

As Biff opened his eyes, he saw Bill’s fountain pen laying there in the table. As Biff held the fountain pen in his hand, slowly lifting it towards him a reflection carved its way on the green marble of the pen. He could see himself looking into his own eyes lost in such discontent. He grasped the pen with the veracity of his fingers and placed it in his pocket. In an instant, he rose up from the chair as if a spirit had just left his body from possession.

Biff Loman descended down the endless flight of stairs like a child running to the comfort of his parent’s arms, his desperation to escape from the building overcame any possibilities of himself colliding into whatever came before him. He had not a single care in the world than to escape. His breaths were as heavy as the downpour of rain on the silence of the cold night, his face weary, tired and exhausted as if he had just escaped from the jaws of death. â

As he flung open the doors of the building, he immediately faced the crowd who he was peering into moments ago. Biff stood awkwardly in the midst of the crowd like a child lost in the fair, uncertain of which direction to take and who to follow.

In the midst of the chaos of the crowd, Biff heard the song end with it’s final words. “The greatest thing you’ll ever learn is just to love and be loved in return…” 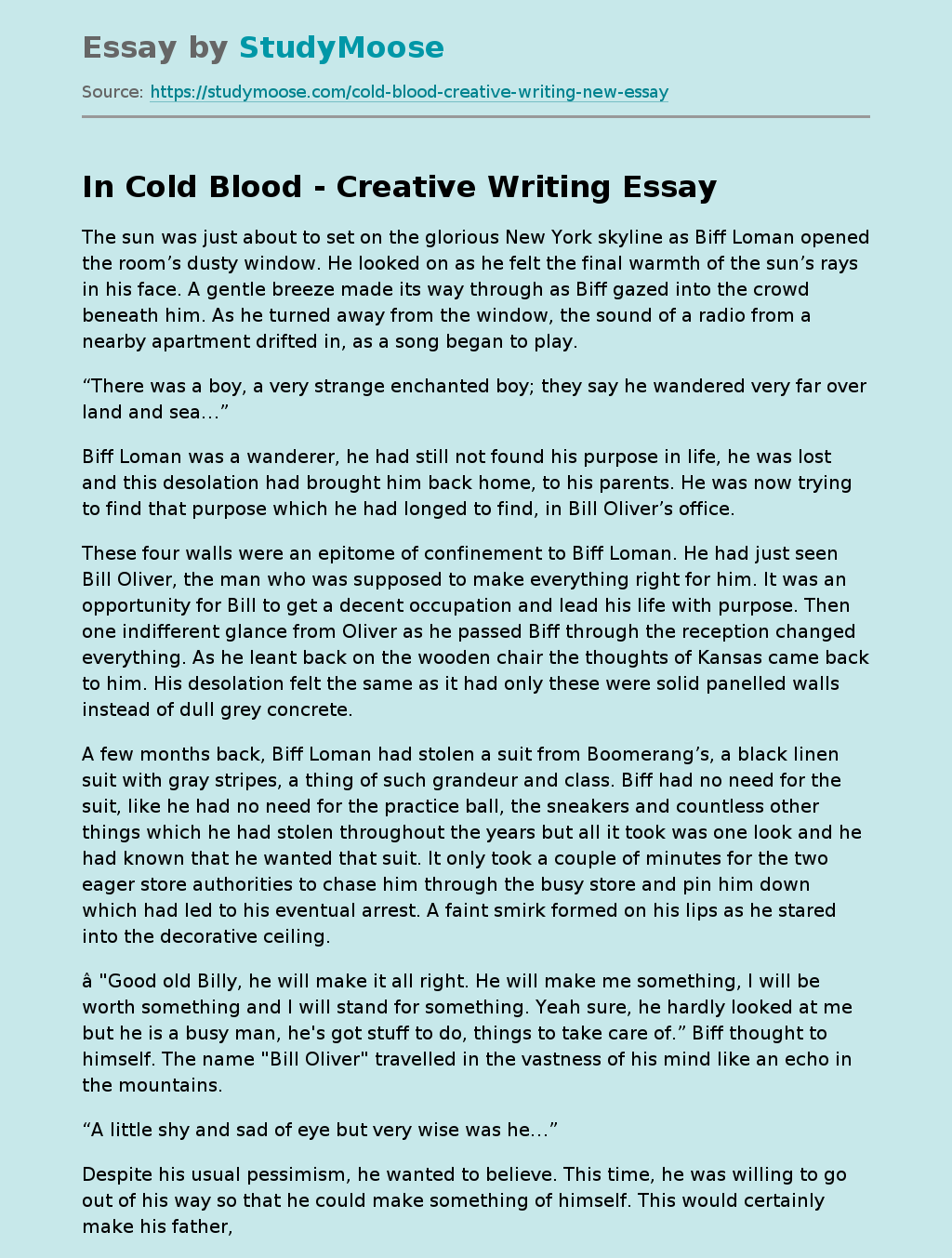