Abstract: There are pros and cons to everything in life. Because I just started my education program, I was interested in researching the positive and negatives effects of an inclusion classroom. I wondered, what exactly were the positive effects this type of setting had on its special education population? I have always felt, in my opinion, that inclusion classrooms are helpful in numerous ways, but now it was time to see if research agreed. History and Background: In the past special education students were separated from general education students.

Don't use plagiarized sources.
Get Your Custom Essay on Cognitive Approach Just from $13,9/Page

“At the federal level, the recent No Child Left Behind Act (2001) and the current and previous versions of the Individuals with Disabilities Education Act (1997, 2004) require access to the general education curriculum for students with disabilities” (Berry, 2006, p.490).

According to Berry (2006) “inclusion may be defined as 100% placement in age-appropriate general education or as a range of learning opportunities both within and outside the general education classroom” (p.490). A teacher can evaluate different perceptions based on how the students communicate with each other. Results: Berry (2006) found that students with disabilities often have difficulty not only academically, but socially. Placing these students in an inclusion classroom, as opposed to the smaller setting of years ago, helps students to benefit enormously.

Depriving disabled children from participating in an inclusive classroom setting, “may underestimate the extent to which these students might benefit from social interactions and, at the most, deprive them of critical opportunities for learning and participation that can lead to autonomy and empowerment in classroom interactions” (Berry, 2006, p.492). Discussion: Inclusion classrooms have two teachers, one that specialized in special education, while the other focuses on general education. While the classroom functions as any other classroom would, incorporating whole, group, and individualized instruction, the smaller classroom setting and extra adults in the room to be quite helpful in helping those students who were struggling. The teachers make sure to use varied teaching techniques and made sure to accommodate many different learning styles in their lessons. Howard Gardner, an educational theorist, believed in the idea of “multiple intelligences.”

Gardner believed every child learned differently. According to Berry (2006) it is important for the teachers to learn how their students learn best in order for them to achieve their fullest potential. The teacher also observes how students interact with one another. Bias/Limitations: It has said that inclusion classrooms can hold back a general education student from progressing at a steady pace; when students were paired with other struggling students. I also found the combination of students of all different academic levels to play a positive role. While the “higher” student helped the “weaker” student academically, both learned social skills. Conclusion: Berry also discusses how language is a useful tool in an inclusion classroom. Berry discusses how reciprocal teaching is often used in these types of classrooms.

Reciprocal teaching is a strategy in which the teacher uses “talk” to make her ideas clear. This “talk” is often focused around comprehension skills such as predicting, questioning, summarizing and clarifying (Berry, 2006). Why article was selected: The education system has come a long way since before the No Child Left Behind Act. In the past, any child with “special needs” was placed on the fourth floor of the building, out of sight. When the general education students saw any of the children with special needs, it was only at lunch, and they were easily identified because they were kept in small groups away from the other children. Today, inclusion has made it possible for many of children to interact and learn in the same environment as their peers. They are being treated as equals, rather than being hidden away in a corner. 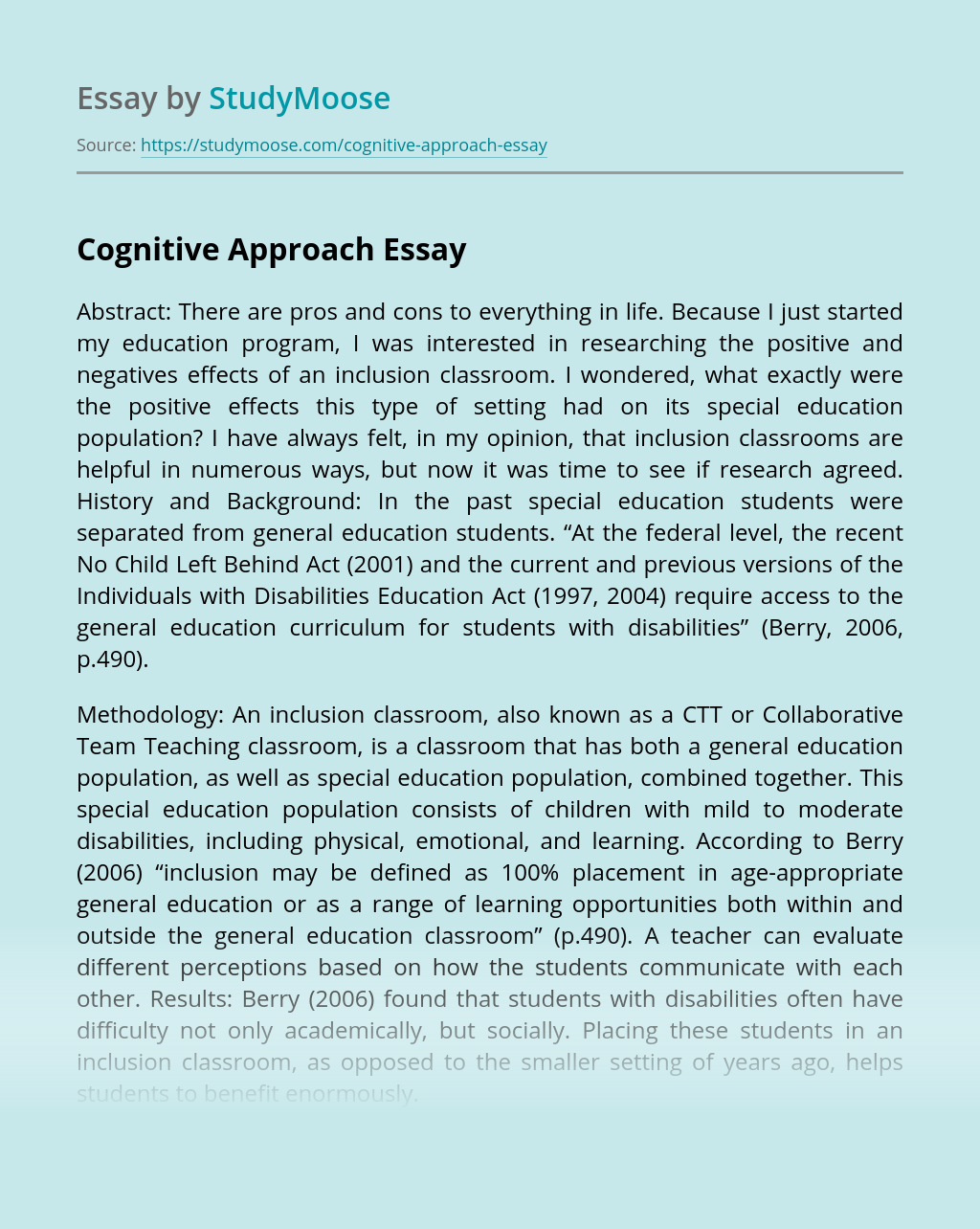