The Coe’s company has been in business since the 1950’s when the founder Terry Windham invested $600 in 32 chairs to rent out to auction houses. From there on, the business expanded into party equipment and sickroom gear. The founder further shifted the business into household goods and residential furniture in the 1970’s. The company has since been growing. Stan Windham, Terry’s son who now is the CEO of Coe’s, recently opened its 1000th store in South Tucson and the company is taking over $2 billion a year in revenues.

Don't use plagiarized sources.
Get Your Custom Essay on Coe Case Company Issues Just from $13,9/Page

Unlike their competitors, Coe’s has had an advantage in the market by always emphasizing ownership and offering monthly payments schedules with shorter contract periods. They trained their managers to only approve lease agreements for people who they were sure they could afford the payments.

Also, one of their strengths was to be able to identify and target the customers who never before were interested in renting-to-own but due to the state that the economy was in, they were afraid to commit to big-ticket items and instead decided to rent-to-own.

They also attracted customers by offering free delivery and free repairs with an option to return the item if customer was not able to make payments but when their financial situation improved they could resume the contract with no penalties. A weakness of Coe’s I would say would be that the company did not diversify their risk and solely built growth strategy only in the U.S.

However, there are other external factors to be considered and those being both opportunities and threats. Coe’s has been considering entering into the Mexican market, which they believe would be a good strategic move for the company and help them diversify their portfolio.

Taking into consideration the low transportation, labor and real estate costs, Mexico would be an inexpensive place to open a new Coe’s store. Of course where opportunities exist, threats exist also. With plenty of growth opportunities in the U.S., an expansion to Mexico would add complications and risks to the company.

The company had experienced this first hand when they tried to expand to Puerto Rico and due to shrinkage and not being able to find the right personnel that did not go to well. On top of everything, the consumer protection advocates are attacking the rent-to-own companies by claiming that the prices of the products are 60% to 90% higher than those of traditional retailers. While every investor is aiming towards growth, they also want to play it safe.

Coe’s has been considering going international and building a growth strategy in other parts of the world for a while. By comparing the strengths and weaknesses, the company is holding a strong competitive position and it can continue to do business at its current pace. I also believe that they should expand their business in Mexico.

An expansion to Mexico would offer a great potential. An in-depth market research will help analyze the patterns and habits of costumers. Doing business in Mexico will not only help the company grow but it will also benefit the U.S. economy. Ever since NAFTA took effect, both large and small American companies have expanded in Mexico. A range of locations in Southern USA have developed rapidly to keep up with the heavy trade between US and Mexico offering new jobs to U.S. Citizens and boosting the U.S. economy. 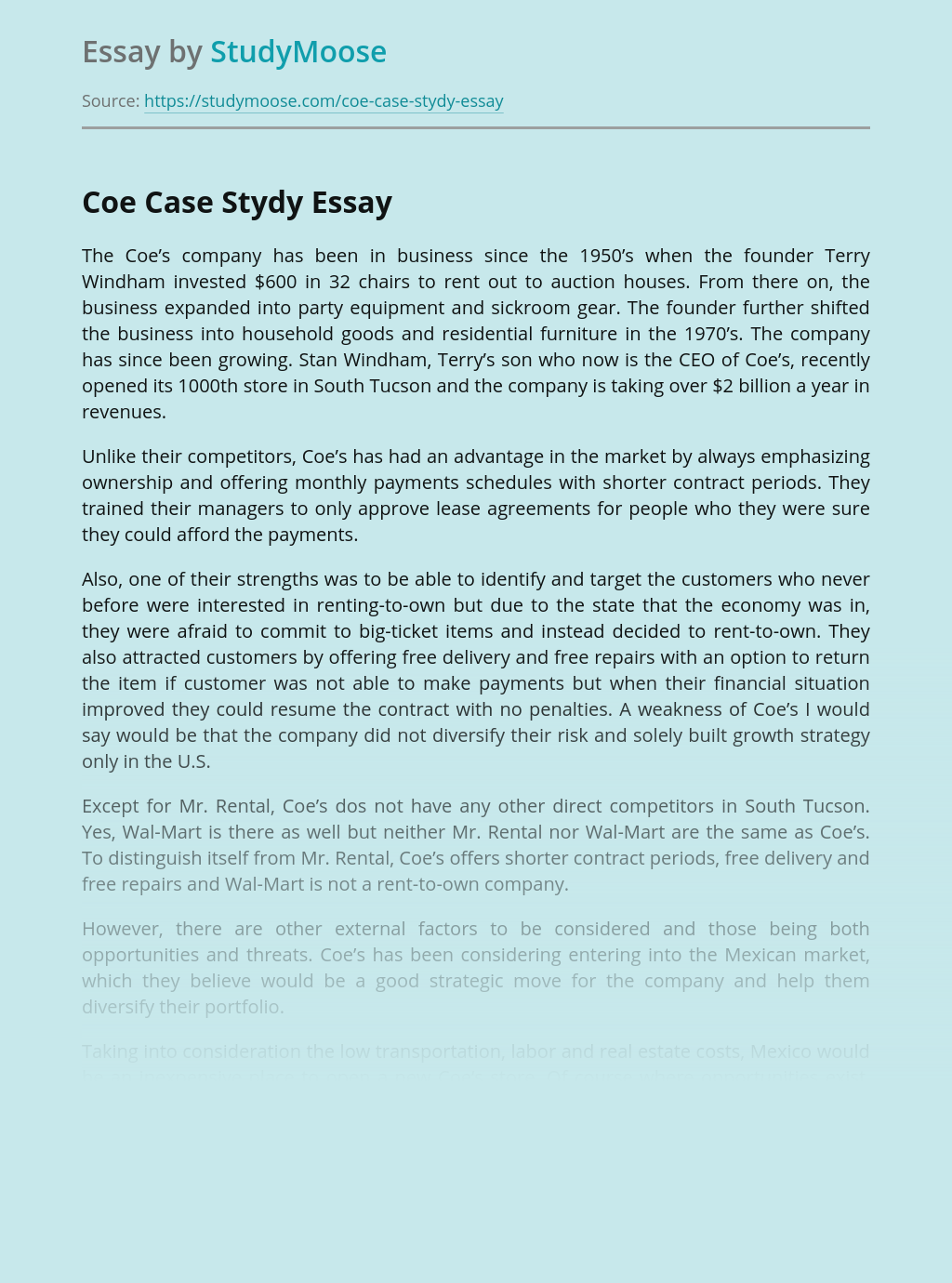 Rate this post What are your professional goals? How will an MBA/GDM/GCCM from AGSM MBA Programs help you? I intend to pursue a career with an insurance management firm focusing on the healthcare industry after acquiring my post-graduate degree. As I coordinate account management projects across functional groups, I will increase and gain exposure on...

Rate this post Introduction This paper analyses the leadership of Carlos Ghosn, CEO of Nissan Motor Corporation. Carlos has been recognised as a successful leader whose leadership managed to rescue Nissan from its financial crisis in the late 90s. His contribution to the company, industry and society is significant. I will start by giving an...

Rate this post We live in a time where entrepreneurship is finally a focus of a significant number of colleges and universities, and is even reaching into high schools. The question I have is: why has it taken so long for schools to recognize the importance of, and start teaching, students about entrepreneurship? I am...

Rate this post Submitted December 4, 2011 Description The organization I have selected is the company I work for, CMH Systems. The core functions of this business are Therapy, Counseling, Placement, and Job skills to name a few. This is a Mental Health Organization that compiles and disburses many services, including Doctors, Prescriptions, Hospitalization, and...

The Making of a Leader

Rate this post Leadership is a virtue that comes with different obligations in life. Leading any organisation that comprises of people with different believes is not an easy task, therefore it calls for extra life experiences both positive and negative challenge will mould one to be that “Perfect” leader living by the doctrine of that...