When it comes to fashion, you can’t compare Gap to Ralph Lauren or Gucci to Keds. The reality of it all, in order to compare fashion you have to know fashion. Fashion in my words, is a way to show or stand out from the next fashionista or guy. It goes from hair to makeup, clothes to shoes in the sense of being comfortable to a night on the town. The designers, Coco Chanel and Alexander McQueen, are exactly that staples in Fashion.

Don't use plagiarized sources. Get your custom essay on
“ Coco Chanel vs Alexander McQueen in Fashion Industry ”
Get custom paper
NEW! smart matching with writer

Coco Chanel, today still premiers with timeless fashion that attracts both old and young. The items seen on runways, by this designer are rather avant garde. Coco Chanel is known for “Chanel is credited with liberating women from the constraints of the corseted silhouette and popularizing the acceptance of a sportive, casual chic as the feminine standard in the post-World War I era.

A prolific fashion creator, Chanel’s influence extended beyond couture clothing; her design aesthetic was realized in jewelry, handbags, and fragrance.

Alexander McQueen, “best known for his in-depth knowledge of bespoke British tailoring, his tendency to juxtapose strength with fragility in his collections, as well as the emotional power and raw energy of his provocative fashion shows, (“Biography: Sarah Burton”. lexandermcqueen. com. Retrieved 24 December 2011).

Chanel would be your timeless and standard from the past and Alexander McQueen will be timeless. With Alexander McQueen is really big on color, whereas Coco Chanel to me reads not dark, but cooler colors that would attract more towards older woman. Chanel is known for being the creator of “the Little Black Dress”. “The concept of the “little black dress,” is often cited as a Chanel contribution to the fashion lexicon and as an article of clothing survives to this day. Its first incarnation was executed in thin silk, crepe de chine, and had long sleeves. 104] In 1926, the American edition of Vogue highlighted such a Chanel dress, dubbing it the garconne (little boy look).

Vogue editors predicted it would “become sort of a uniform for all women of taste,” embodying a standardized aesthetic, which the magazine likened to the democratic appeal of the ubiquitous black Ford automobile. This look, a spare sheath, generated widespread criticism from male journalists who complained: “no more bosom, no more stomach, no more rump…Feminine fashion of this moment in the 20th century will be baptized lop off everything. (Charles-Roux, Edmonde, “Chanel and her World,” Hachette-Vendome, 1981, p. 210) Alexander McQueen is known more his racy and controversial designs and fashion shows. “McQueen’s early runway collections developed his reputation for controversy and shock tactics (earning the title “l’enfant terrible” and “the hooligan of English fashion”),[4] with trousers aptly named “bumsters” and a collection titled “Highland Rape”.

In 2004, journalist Caroline Evans also wrote of McQueen’s “theatrical staging of cruelty”, in 032c magazine, referring to his dark and tortured renderings of Scottish history. [20] McQueen was known for his lavish, unconventional runway shows: a recreation of a shipwreck for his spring 2003 collection; spring 2005’s human chess game; and his fall 2006 show “Widows of Culloden”, which featured a life-sized hologram of supermodel Kate Moss dressed in yards of rippling fabric. ( http://032c. om/2004/fashion-alexander-mcqueen/Evans, Caroline, “Fashion: Alexander McQueen”, 032cissue 7 (Summer, 2004)”

In Conclusion, when comparing the two, you have to realize that even from the grave, they rule in the fashion world. The forever, timeless Coco Chanel is still alive and well in every fashionista closest. Alexander McQueen is also still going well even after a sudden death. The regalness of both designers is not denied, but their style is more outward for each era that their fashion was brought and made its first debut. 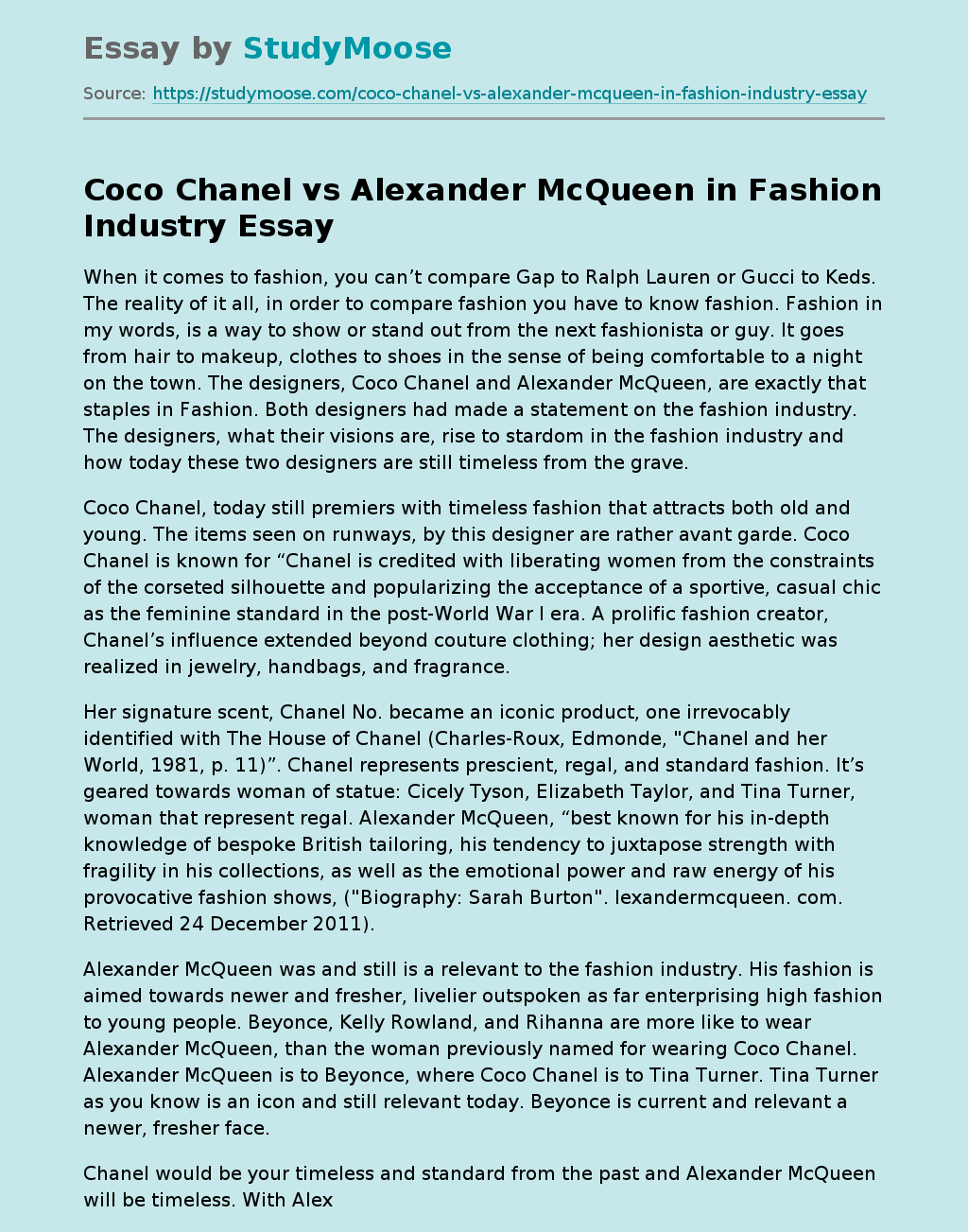