The Issue Coastal management is the dealings surrounding the management of development along the coastline with sustainability- being able to meet the needs of future generalizations while capitalizing the use of desired areas of the coasts for residential and commercial purposes.

My written report on coastal management will revolve around the main issue explored in our field trip which is the gradual erosion of the foredune on Collaroy beach, and its effects on stakeholders (incl. residents, developers, specialist groups). This report will also include the decision making processes considered by the management (both local and state), as well as the descriptions of their actions/strategies, and thus the results of their policies.

The LocationOur site of interest, Collaroy beach is located in the suburbs of Northern Sydney, in the state of New South Wales, Australia. Collaroy is part of the local government area of Warringah Council and part of the Northern Beaches region. Collaroy is well known for its excellent surf beach which joins with Narrabeen Beach in the north and Long Reef and Dee Why Beach in the south.

Also in close proximity is the Dee Why Lagoon as well as the Long Reef Head.

Collaroy beach is the most highly capitalized shoreline in the Warringah local government area, featuring beachfront houses and apartments built on the edge of the sand including the famous Flight Deck Apartments.

Geographical ProcessCoastal erosion is the loss of land along the shoreline due to the natural removal of beach and dune material in response to changing wave and water conditions.

Buildings and facilities located within the ‘active’ beach system, or areas subject to coastal erosion can be undermined and may even collapse.

Approximately 60 percent of the NSW open coastline is characterised by sandy beaches. These beaches are dynamic environments undergoing continual cycles of erosion and accretion in response to the action of tides, wind and waves. In many places, existing foreshore development has been built within the ‘active’ beach system and is at risk from coastal erosion.

The extent of beach erosion during a particular storm event depends upon a variety of factors that include:•The wave conditions and elevated water levels generated by the stormThe most prominent of these processes involves waves and the currents that they generate, along with tides Waves are generated by wind blowing over a body of water and are ultimately responsible for the construction and erosion, as well as transportation of beach sediments.

Waves are classified into two groups: swell waves or sea waves. The incoming tide of a wave is called a swash while the outgoing tide is called a backwash.

Swell waves are more powerful and cause erosion, whereas sea waves are less violent and encourage deposition. Large swell waves are usually accompanied by a storm, and the swell may become big enough to be classified as a ‘king tide’. A king tide’ arrives at Narrabeen-Collaroy Beach once or twice annual and has a devastating effect on the beach, eroding the beach until a near vertical erosion scarp is exposed. The sand than is deposited offshore to form a sand bar.

The features of a storm profile are the erosion of incipient dune and the exposure of the near vertical erosion scarp, near the fore dune of the beach, as well as a large offshore bar. This beach would therefore have a storm profile. A beach in which the sea waves have gradually restored the sand to the incipient dune from the sandbar, as well a stable fore-dune are the tell-tell signs of a post-stormprofile. A beach which is in better conditions is more suited to fight sand erosion, while a ‘second wind’ of a storm after the beach being in a storm profile could be devastating for the beach.

•The condition of dune vegetation which can influence the volume of sand in the dunes which help to buffer the effects of storm erosionStable sand dunes play an important part in protecting the coastline. They act as a buffer against wave damage during storms, protecting the land behind from salt-water intrusion. This sand barrier allows the development of more complex plant communities in areas protected from salt-water inundation, sea spray and strong winds. The dunes also act as a reservoir of sand, to replenish and maintain the beach at times of erosion. When people build homes or resorts on beaches, the buildings interrupt this natural process because the sand that is usually taken by storms is removed so that humans may build. In the diagram below the red line shows the extent of the danger zone.

Key Interest GroupsThe key interest groups involved with the issue of the erosion of Collaroy include groups such as Sydney Coastal Councils Groups, which have criticize the non-actions of the Warringah Council to set up a plan in the long term, instead focusing on short term relief such as sand replenishment, which SSCG deems as unsustainable in the long run. However, SSCG may be the only interest group targeting the issue. However when it was announced that the sea wall was planned for construction two tother peer groups, Surf rider Foundation Club, as well as the local Collaroy Surf Club joined in action to stop the construction of the seawall.

Decision Making ProcessTo find a solution for the erosion of Collaroy Beach was a complicated process involving decision making and assistance in many levels. The NSW and Commonwealth government provided assistance to Warringah Council by providing material to help it construct an effective Management Strategy.

Material included in this state and commonwealth package Included 1990 the NSW Government released its Coastline Management Manual, a guideline to help local council’s development, Coastal management plan by them. It also provided Commonwealth inquires such as reported on’ The Injured Coastline’ and’ The Coastal Zone Inquiry’.

In 1993 the Warringah Council set up the Warringah Coastal Committee which has various stakeholders as members including: a WC councillor, A NSW Govt Rep, a Surfrider Rep, a SLSC Rep, Beachfront and other Local residents. This diversity in the committee instead of just containing members of the council helped to foster unbiased views on the opinions of the stakeholders as well increase the community involvement which helps to better serve the purpose of the community, making the ideas of the community in which is ultimately the council’s purpose anyway.

The Committee meets once every two months to advice Council on the next action to stop the erosion. In August 1997 the Collaroy/Narrabeen Coastal Management Plan was adopted. Throughout this process and before any major strategies are implemented the public are invited to comment and provide community feedback. However there have been criticisms of the committee as consensus-based Coastline Management Plan was pursued by Council but not achieved, with strong differences of opinion emerging within the community, and between the Warringah Coastal Management Committee and CouncilManagement Actions and Strategies (and Consequences)

There have been many different management strategies that could have been implemented to protect from or at least slow down the effects of erosion, enough to guarantee the safety of the dwelling. Preliminary studies reviled that the existing rock seawalls are not strong enough to withstand a major storm. There are two long term solutions to this issue. They are voluntary purchase of high risk dwellings, and the protection of the beach through the building of a seawall or an artificial surf reef. The community is split between those strategies for tackling the erosion problemA temporary solution involve minor to moderate sand nourishment, which are used in conjunction with either of these actions. The sand comes from the mouths of the Dee Why and Narrabeen Lagoons.

The management strategy of repurchasing high risk single homes has been a popular strategy amongst those whom want to protect and enhanced the recreational amenity of the beach. This method was successful back in 1945 when the council bought back 7 houses that were damaged by the storm. However in recent years, the price of beachside property skyrocketed with high demand, and the strategy is currently not economically feasible at this point in time. With an average home in 2005 located on the fore dune of Collaroy Beach coasting a whopping 2.7 million- the plan is estimated to cost more than 100 million dollars. Even though the state government is willing to match the contributions the state government made, this strategy if implemented could take anywhere between 50 to 100 years to purchase every single home that is in the high risk zone.

The alternative strategy is to develop a seawall on the beach to protect the property located on the fore dune. The sea wall would be approximately 1 km long and will be sufficient to protect the fore dune from collapsing. However the cost of the sea wall cheap in comparison to the ‘repurchase’ strategy costs approximately 11 million dollars to build. In addition, the council expects at least 40% of the 11 million to be paid by the owners of the units, making it an unattractive deal for the residents.

The seawall is also not environmentally friendly either. It is known for speeding up the process of erosion, as the energy of the storm waves is not absorbed but reflected, meaning the backwash will be stronger, and eventually the shore profile will retreat, removing what’s left of the beach. However this idea also seems to be out of reach, as after the successful “Line in the Sand” community protest in November 2002, the council voted 4 months later not to proceed with the sea wall option.

So with the ‘repurchase’ strategy unlikely, and the seawall not likely to be built, how is the council going to solve the problem. Right now, the plan is to get by on minor beach nourishment from the mouth of Narrabeen and Dee Why Lagoons for now, while the council investigates new strategies, with the help of newly implemented coastal imaging cameras on top of Flight Deck.

One of the new strategies being investigated includes an artificial surfing reef, which is basically a seawall underneath the water to amplify the surf. Acting like a ramp, it pushes waves upwards which increases their size and shapes them into waves you can surf. This also reduces the impact of the swell waves, reducing the rate of erosion. However, this technology is quite new and it is debateable in its affectivity, but the results are promising, and it is also drastically cheaper than the original strategies, making it a viable solution for the ongoing problem in a number of years time. (The diagram below shows an artificial surf reef) 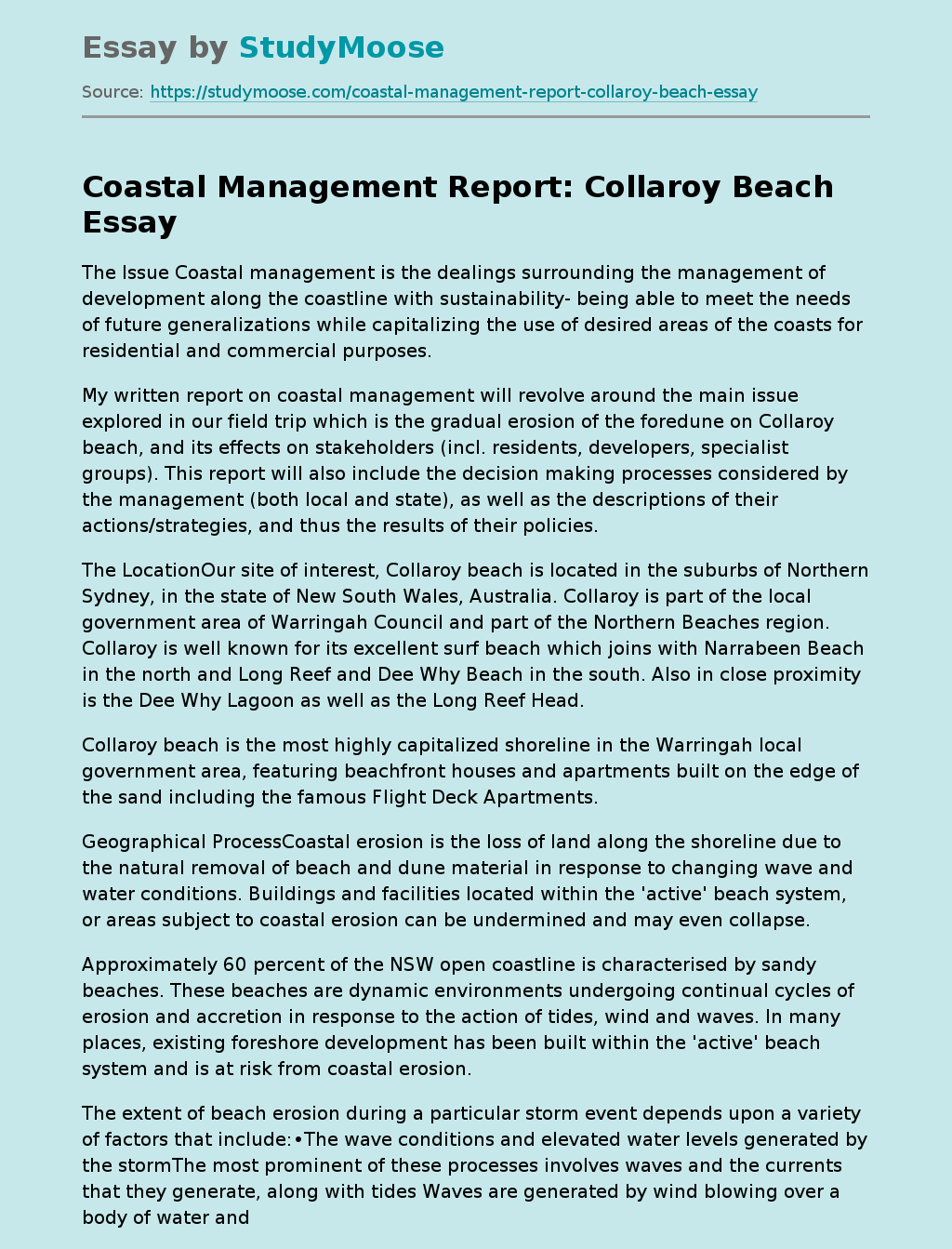