“Coach Carter” is a movie from 2005 by Paramount pictures and it is directed by Thomas Carter. It is based on a true story, in which head basketball coach of Richmond High School, California, Ken Carter made the headlines in 1999 for benching 15 players of his undefeated team due to very bad academic performance.

This action is known as the lockout, but this action was very criticized by the Richmond High School, the players’ parents, the city, and media commentators. Ken Carter maintained that his athletes must take their studies seriously, so they could get access to college and other opportunities later on in life and the community’s opinion eventually changed when they started to see his reason, and after he was praised for his determined emphasis on prioritising these good values for his players.

Don't use plagiarized sources.
Get Your Custom Essay on Coach Carter Just from $13,9/Page

The movie is about Ken Carter, a successful sporting goods store owner, who accepts the job as a basketball coach for his old high school in the poor area of Richmond, California, where he was an elite athlete.

As much dismayed by the poor attitudes of his players as well as their very bad performance on the court, Carter sets about to change both. He immediately imposes a strict regime typified in written contracts that include stipulations for respectful behavior, a dress code and good grades as requisites to being allowed to participate. The initial resistance from the boys is soon dispelled as the team under Carter’s tutelage becomes a undefeated competitor in the games.

However, when the overconfident team’s behavior begins to stray and Carter learns that too many players are doing poorly in class, he takes immediate action. To the outrage of the team, the school and the community, Carter cancels all team activities and locks the court until the team shows acceptable academic improvement. In the ensuing debate, Carter fights to keep his methods, determined to show the boys that they need to rely on more than sports for their futures.

You should not only see this movie because of the basketball, that is just a bonus you get, but you should see this film if you like to see films about people who make a difference. Ken Carter makes a difference to some poor players without hope in their lives. The team starts out whit no hope or dream about getting in to college and the team got no unity. All these things plus many more are Ken Carter trying to change. So if you like to see youngsters with a poor life getting a new chance in life, you should differently see this movie.

This movie could sound kind of boring, but it actually is not. This movie has a lot of moving moments and inspirational speeches and scenes. Is not only moving moments, there are also action in it, on the basketball court, but also in their life example one of the boys is a drug dealer and his uncle get shot.

Timo Cruz: “Our deepest fear is not that we are inadequate. Our deepest fear is that we are powerful beyond measure. It is our light, not our darkness, that most frightens us. You are playing small does not serve the world. There is nothing enlightened about shrinking so that other people won’t feel insecure around you. We are all meant to shine as children do. It’s not just in some of us; it is in everyone. And as we let our own lights shine, we unconsciously give other people permission to do the same. As we are liberated from our own fear, our presence automatically liberates others.” 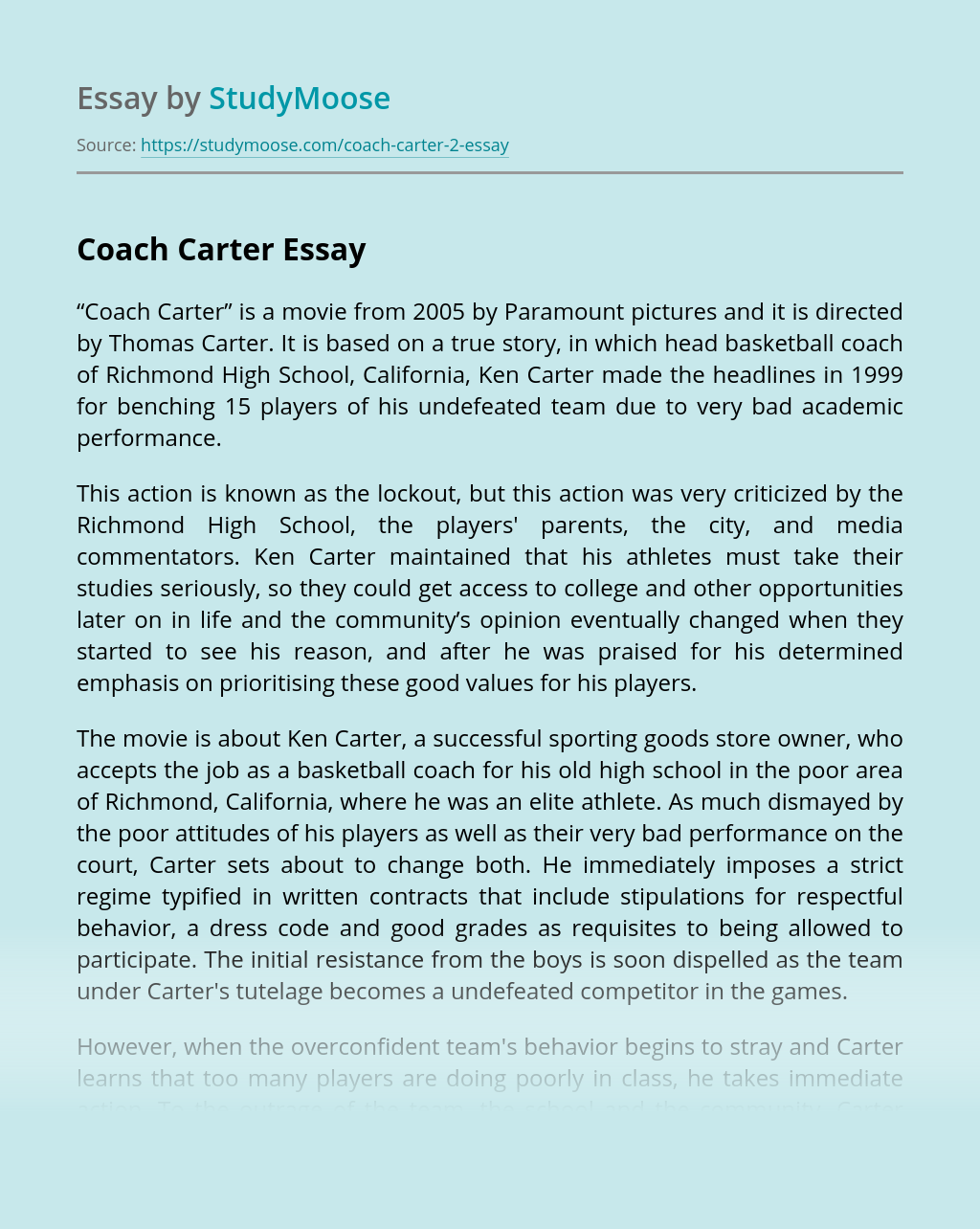 Women's role in revolutionary Russia Even though women have often been

2.2 Women’s role in revolutionary Russia Even though women have often been seen to have taken a backseat position in the Russian Revolution, it was ultimately women who fuelled the it with start of the February Revolution on 23 February 1917 as Thousands of female textile workers and housewives took to the streets of Petrograd,... VIEW ESSAY

View sample
The Importance of Portfolio

Portfolio is identified as the living and changing collection of records of an individual that reflects all the accomplishment, skills, attributes, and experiences that he or she has (College of Charleston 1). In the professional field, most especially that in animation, portfolio is an important element in securing a job as an animator because it... VIEW ESSAY

View sample
To Feed the Night

Marketing Management is an organisation discipline which is concentrated on the useful application of marketing strategies and the management of a company’s marketing resources and activities. Quickly emerging forces of globalization have compelled firms to market beyond the borders of their home nation making International marketing extremely substantial and an important part of a company’s... VIEW ESSAY