CMR, originally Mike’s Cabinets, is an architectural millwork business that competes in two different market segments: commercial and residential. In order to effectively compete in both markets, the nature of CMR’s business varies slightly between them. Commercial business provides two-thirds of the company’s projects as well as 80% of its sales. Due to the higher volume in demand, the commercial sales force is larger than the residential sales team, which relies heavily on CMR’s showroom. The market for commercial business is larger than residential market with projections of its value at upwards of billion.

Turn in your highest-quality paper
Get a qualified writer to help you with
“ CMR Enterprises Analysis ”
Get high-quality paper
NEW! AI matching with writer

Commercial contracts are also harder to secure than their residential counterparts. They must be bid on and won. Due to the heavy competition for these larger commercial contracts, the “got rate” for them is around 32%, whereas the residential “got rate” is around 69%. CMR’s residential department has to operate somewhat differently than the commercial facet of the company. First of all, project management requires a different degree of flexibility in order to meet ever-changing customer requests.

Cash flow cycles are about four to six weeks, which is significantly shorter than the 6 months or more it takes for a commercial cycle.

However, CMR is building relationships with many contractors in attempt to make their jobs easier and potentially work with them in the future. Although CMR treats every customer as equally important, the commercial customers are arguably more valuable. 35 of the top 50 contractor prospects for 1999 were commercial contractors. Furthermore, commercial business typically achieves higher revenues and is likely the only means of meeting CMR’s aggressive growth goals. When Sam Marcus and William Walters bought Mike’s Cabinets in early 1997 they knew they were going to need to change some things about the way their business operated. Mike’s Cabinets was running very well as a small town cabinet shop that worked on projects for homeowners as well as large commercial buildings, and had a very good reputation with the people of Lincoln,Nebraska.

Although things were running smoothly with the business, Sam and William wanted to produce more profits, and increase cash flows. Blackstone Homes was a homebuilding company that started only two years before Marcus bought Mike’s Cabinets. By the time Marcus was in charge of CMR, Blackstone was one of the largest homebuilders in the area. The president of Blackstone Homes approached Marcus in the fall of 1997, with the idea of starting a partnership. Blackstone was having problems with their current supplier because they couldn’t seem to deliver the cabinets when promised. Marcus was initially intrigued by the sheer volume of work they would be doing with Blackstone, but he thought it would be a great fit with where he was planning for his company to go, and seemed like a great way to make progress towards his profit and cash flow goals. Marcus had to work with his employees and overall business plan, but decided that the residential side of the business was worth expanding, so he signed a contract with Blackstone Homes. Marcus’s decision to sign with Blackstone Homes was a very good idea for CMR Enterprises. Blackstone had great potential to become one of CMR’s largest accounts, and promised to have continual yearly growth. Blackstone agreed to specify only CMR’s cabinets in all their homes, and CMR assigned a project manager to work exclusively with their new partner. Both companies could see that they would both be benefiting from this partnership from the very beginning, and they were correct. Throughout the first year, Blackstone contributed heavily to CMR’s success, and eventually grew to be about 25% of the residential side of the business. Marcus saw that the residential side of the business had great potential for future growth, and he knew that this was a great way to get his company involved. The additional emphasis on residential work used more of the company’s resources, but it proved to be worth it with the increased revenue and cash flows. CMR Enterprises is confronting an issue with one of its most valuable clients, Blackstone. Blackstone as one of the biggest customers in the area, giving CMR an opportunity for immediate market share and his volume supported its goals to standardize its processes into flexible cells.

They approached CMR looking for a new partner to work on a business that represented 25% of CMR’s residential business during the first year of this relationship. Sam Marcus was counting on further growth with his customer to pay his debt and fund expansion efforts. But relationshipswith Blackstone had become increasingly intense on residential construction. Marcus had aggressive goals of reaching $70 million in sales by 2007 by creating a scalable and replicable business model. Moreover, build close relationship with the Blackstone will gave CMR an opportunity to standardize its business processes to be able to benefit from improved operational efficiencies that comes because of scale of operations. However, the relationship between two companies had evolved unpleasantly over time. When Blackstone sells a house, it does come with a pre-finished and installed kitchen, which is included in the price. But if customers want to check CMR’s showroom, they would build these woodworks according to their new specifications. So the added cost will then be charged to the contractor. After an increase in CMR prices, Blackstone transferred this increase to subcontractors, so impacting considerably their margins and making CMR looked as a too expensive product. This issue to some extent contributed to the clash with Blackstone. Also, internal miscommunication had played a part in this episode. Marcus had implemented a software system for the company, called InfoCentral, and insisted that the residential team use InfoCentral for all internal communications. But it did not work out the way he expected. The system is not frequently updated as required by the employees.

The business relations between the two companies started well and was fulfilling for both part. Revenues from Blackstone represent a significant part of revenue growth of the year. However, when the business expended, so did the problems. What was more disappointing was that CMR had shown a weak management of its relationship with this big client and several operational failures that need to be controlled. Within CMR Enterprises, revenue is generated at different rates in the different segments. Commercial business is responsible for 82% of the revenues generated by the firm, leaving just 18% to residential. Not only do they generate revenue at different rates, but profit is generated at different rates as well. According to the CMR Enterprises Factsheet, SG&A Costs were $2,900,000. If we distribute these costs according to percent of revenue generated across the CMR’s business segments, we see that the commercial segment provided a Net Profit of $1,124,152 for a Net Margin of 15.5%, while the residential segment provided a Net Profit of $87,632 for a Net Margin of 5.4%. Blackstone’s Net margin of 5.7% is actually greater than the Net Margin for the residentialsegment without Blackstone. Net Profit from Blackstone for the year was $17,235.

In the second scenario, SG&A costs were assigned in a different way. Indirect labor was assigned to the corresponding segment. SG&A expenses besides indirect labor were then distributed to the segments according to percent of revenue generated. This tells a different story. Whereas in the first scenario the commercial segment was responsible for almost 10% more Net Margin; in the second scenario, residential Net Profit was $274,632 for a Net Margin of 17.2%, while commercial Net Profit was $937,152 for a Net Margin of 13.9%. In this scenario Net Margin from Blackstone is only 13.3% of revenue, which is below the average for residential. The cause of the difference between the scenarios is the high number of administrative personnel assigned to commercial work. From the CMR Enterprises Factsheet, we see that there are 43 administrative personnel, of which only 4 are dedicated to residential work. This leaves 39 employees working on commercial work at an average of $50,000 per year, a total of $1.9 million dollars. Scenario 2 captures this more fully, placing a more realistic percentage of SG&A costs onto the commercial segment. Blackstone’s profitability is slightly less than that of the commercial business, and nearly 4% less than the residential business.

Terminating the relationship with Blackstone would be a good choice in the situation for CMR Enterprises. It is obvious that Blackstone provides a significant amount of residential business, which means a substantial cash contribution to support CMR’s other business like commercial work. Especially in the initial partnership, CMR first grabbed residential market share and earned 25% more of its residential business and Blackstone benefited from CMR’s expertise and correction. However, some potential loss shows the general trend that CMR benefit less and less in the partnership with Blackstone. First, CMR acquires more profit per shop hour in commercial business than residential work. According to Exhibit 7b, the highest residential revenue per shop hour of $48.13 is less profitable than the lowest commercial revenue per shop hour.

Even though we recommend letting Blackstone go as a client, the residential business on a whole is profitable and should be kept. It is integral to the companies’ core values, and provides a valuable link to the community. Moving forward with franchising efforts, however, we would advise sticking to commercial business. If CMR is to attempt to make headway into new markets, it would be advantageous to proceed with a strategy that is more singular in focus. CMR has had success implementing their InfoCentral tool in their commercial business, and it seems that they have a good business model going forward. Trying to replicate the success that they’ve had with the residential business would add unwanted complexity to their business model. CMR’s current residential customer base is there as a result of years of loyalty and good service from Mike’s Cabinets. This loyalty would not exist in a new market. 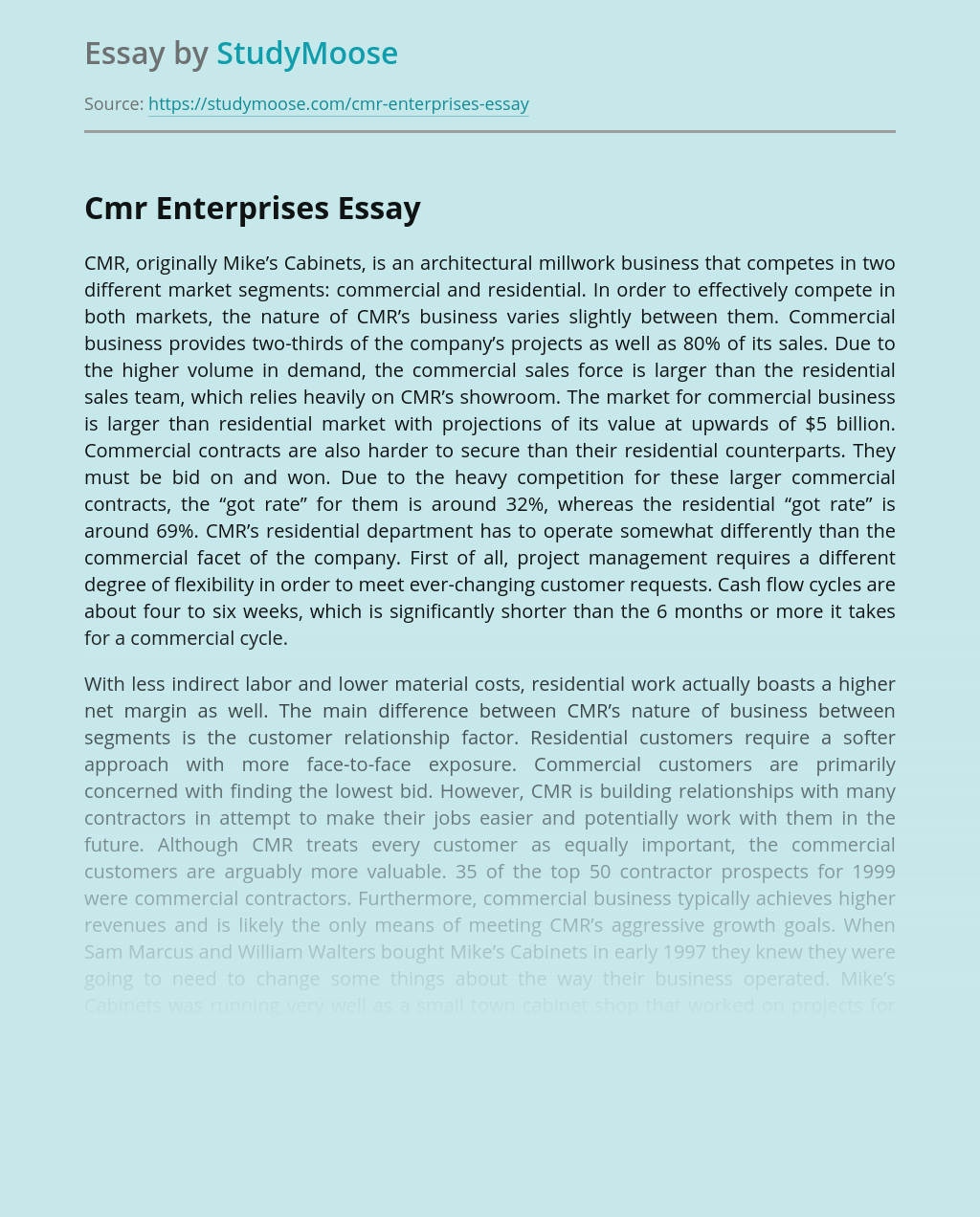 Turn in your highest-quality paper
Get a qualified writer to help you with
“ CMR Enterprises Analysis ”
Get high-quality paper
Helping students since 2015
Stay Safe, Stay Original