Close analysis of Rhapsody on a Windy Night

From the opening line Eliot engages the audience by having an auspicious beginning. By using “twelve o’clock”, he has taken an ungrammatical sentence and used it as a bridging between two days. He does this as a way of setting up the novelistic functions within his poetry, a common feature of his writing. He continues with his narrative technique by following the time by the place in which the poem is set. The “lunar synthesis” referred to in the first stanza is used to emphasize the correlation of two things; evolution and Christianity.

Turn in your highest-quality paper
Get a qualified writer to help you with
“ Close analysis of Rhapsody on a Windy Night ”
Get high-quality paper
NEW! AI matching with writer

By having “whispering” as the next word it gives a hint of secrecy as well as giving the possibility that there is a sense paranoia within the link between the two that constitutes the start of the misconceptions and loss of certainty. This is then followed through the poem by the mention of memory; an element that comments not only on the altered state of consciousness, but in a broader sense, “it’s division and precisions” highlights the view of the modern mind, in that it is dissolving into a more poetic state for deeper understanding.

The auditory imagination inspired with Eliot’s reiteration of memory is further enhanced by the madman. It brings an oppositional aesthetic quality when Eliot delves into the idea of death and “shaking the dead geranium” as a way of bringing something back to life, while still being able to capture the fluidity of the poetry to keep a rich sonorousness quality to his work.

The personification of the street lamps is used to emphasize the surreal, almost dream-like representation of life.

By going on to introduce what is viewed as a prostitute uncertain about her solicitation, Eliot is reprimanding the reader into the dangers of fornication, a direct link to the epigraph from The Jew of Malta mentioned in another of Eliot’s poems; Portrait of a Lady, while simultaneously commenting on the implications these surreal images of life impose. The human qualities given to the door are used as a symbol for memory, in that when memory goes, everything is open for interpretation even those wanting to remain hidden.

Eliot delves into the taboo subjects commenting on the deformed humanity which is then enforced with “the corner of her eye” which “twists like a crooked pin”. He uses the “twist” as a motif for the hurt and betrayal that the deformity has created which can then be seen to have shattered the window to the soul. Eliot uses time as a preoccupation throughout many of his poems, however it is intensified in ‘Rhapsody.. ’ with the beginning of each stanza highlighting this.

The “rust that clings to the form” is used to show that something has declined, the degradation because of time that has then caused life to be drawing to an end; “ready to snap”. The idea of death is embedded throughout the poem up until the final line of the poem. Having something so profound like “the last twist of the knife” as the ending helps to create dramatic tension, but to also cease the evolution of time throughout the poem into complete silence, to represent the silence after the last heart beat.

Close analysis of Rhapsody on a Windy Night. (2016, Jul 21). Retrieved from https://studymoose.com/close-analysis-of-rhapsody-on-a-windy-night-essay 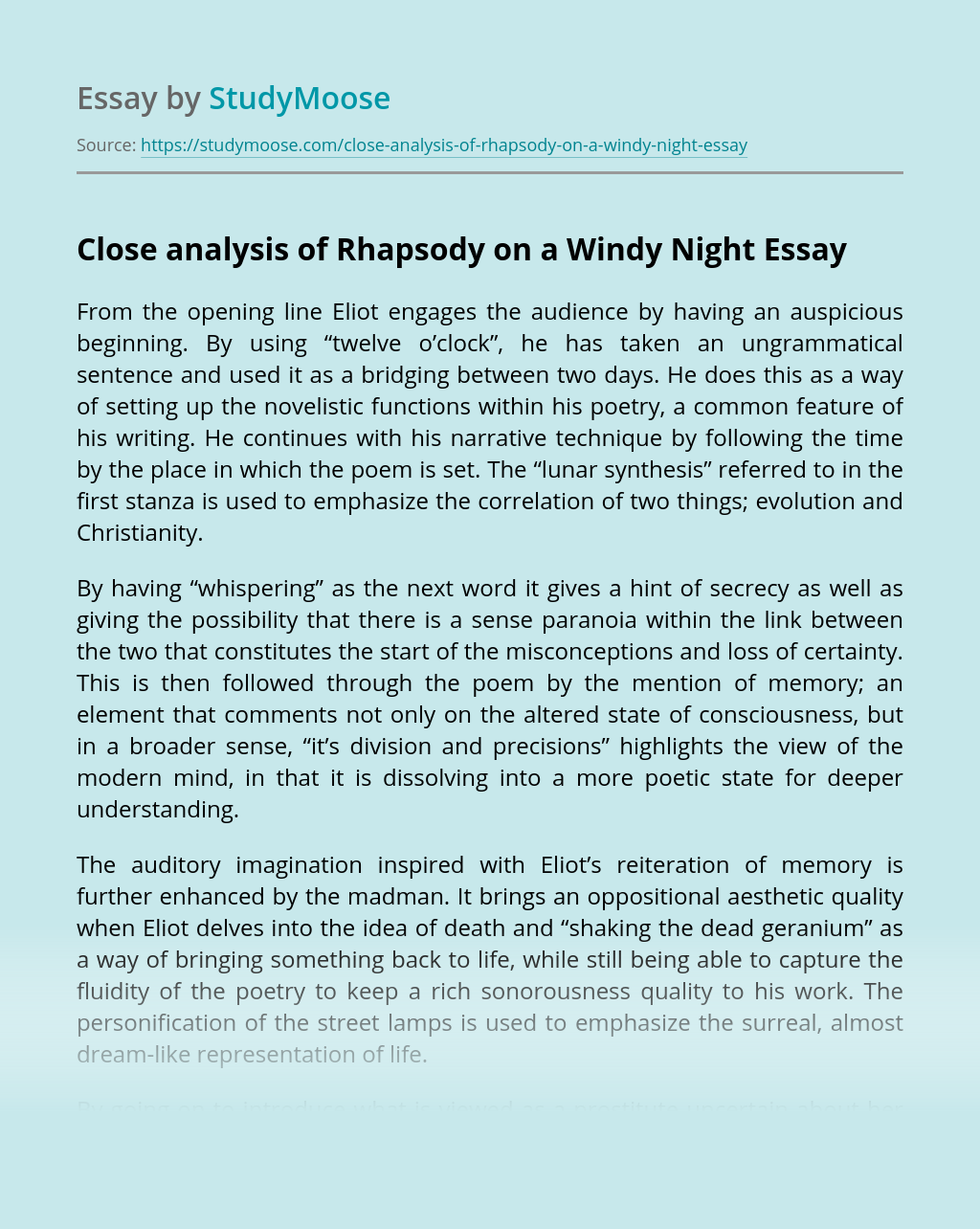 Turn in your highest-quality paper
Get a qualified writer to help you with
“ Close analysis of Rhapsody on a Windy Night ”
Get high-quality paper
Helping students since 2015
Stay Safe, Stay Original