Shakespeare’s language portrays tragedy and disorder in King Lear in many ways, especially in the context of developing the idea of disorder in Act 3, Scene 4. The Oxford Dictionary defines disorder in three ways, all of which are portrayed in King Lear. The definition is as follows: “a lack of order; confusion, the disruption of peaceful and law-abiding behaviour [and/or] (Medicine) a disruption of normal physical or mental functions.

1 The overall purpose of Act 3 is: to juxtapose events preceding events; outline the action of a single stormy night and chart Lear’s descent in to madness and much of this scene on Lear’s mental disintegration.

Don't use plagiarized sources. Get your custom essay on
“ Close Analysis of Act 3 Scene 4 of King Lear ”
Get custom paper
NEW! smart matching with writer

In Act 3 Scene 4, Lear is a broken man in a fragile state who is seeking mental redemption from the storm which can be interpreted as from the Gods. He isn’t bothered about his physical state and more concerned about his mental anguish. This contrasts with the strong and powerful king who is depicted in Act 1 and 2.

This shows a lack of order because the audience and society expects a king to be strong and powerful so they know he’s in control. Shakespeare’s technique of characterising the tragic hero in King Lear is typical of his tragedies. At the start of Scene 1, Gloucester and Kent are talking about Lear: “I thought the king had more affected the Duke of/Albany than Cornwall. ” by introducing the tragic hero with the opinion of other characters the audience forms an impression of the character before they come on stage.

The impression of King Lear at this early stage is that he is governing a corrupted society in which his ruler ship is governed by favouritism much like the love trial. For example in another of Shakespeare’s tragedies, Romeo and Juliet, Romeo the tragic hero, is portrayed by his parents and cousin before he enters in the impending scene: “[Lady Montague] O, where is Romeo? Saw you him to-day? /Right glad I am he was not at this fray…. [Benvolio] A troubled mind drave me to walk abroad;” The key phrase here is ‘troubled mind’ showing that before the audience meets Romeo he is a ‘troubled mind’.

Disorder is presented in a naturalistic way which is typical for Shakespearean writing; in the extract Shakespeare portrays how Lear rather would face a bear than the relentless storm metaphorically: The quote “The lesser is scarce felt. Thou’dst shun a bear; / But if thy flight lay toward the raging sea, /Thou’dst meet the bear I’ the mouth. “, shows that Lear feels that we would rather be eaten by a bear, committing the sin of suicide maybe and taking what might be considered a easier decision, than face the storm.

It also foreshadows future chaos because of the confrontational nature of what is said could connate the angriness of a bear and that Lear is angry at his metaphorical madness. The language and visual imagery used by Shakespeare is a dramatic device telling the audience the extent of the storm, before the time of electric, sophisticated lighting and mise en sci??ne. This is opposed to the domestic tragedy with more precise instruction on props and stage directions. Shakespeare portrays what a domestic tragedy does in his language rather than physical setting.

The word ‘scarce’ shows that he is left with nothing as a result of the ‘greater malady’ in which he can’t fix and shows that the smaller problems; like wanting to retire at the beginning of the play and still wanting to remain in power, are put in perspective as larger ones arise; for example being abandoned by his family and in effect being denounced as king. This emphasises a disruption of peaceful behaviour because given the power to rule his kingdoms in Act 1 Scene 1, Gonerill and Regan ‘shun’ Lear out of his kingdom.

Furthermore in this analogy he likens himself to the bear or how he should acted more bear like: in the sense that bears are protective and therefore loving towards their young. This idea appeal to the theme of trust which runs throughout the play and shown with a variety of characters and points of action. This lack of protection portrayed in the metaphor of a bear also refers to the banishment of Cordelia because he is banishing her into the unknown: “[Lear] the mysteries of Hecate, and the night; /Here I disclaim all my paternal care,… /Hold thee, from this, forever. The word ‘mysteries’ also emphasizes that he ‘disclaims all paternal care’ in to the unknown in which at this time he is unheeded to what will happen to his daughter. These quotes appeal to the theme of trust because he trusted Gonerill and Regan that he should not have and did not trust Cordelia.

The repetition of ‘but’ shows Lear thought processes are conflicted, confused and he doesn’t have control over his mental functions, this emphasises disorder because he is over analysing the situation. The word ‘flight’ relates to the common phrase for modern audiences of the ‘flight-or-fight’ response or acute stress response which shows Lear confused in decision making and wondering what he should next. Even though this idea was developed after Shakespeare’s time it still could be relevant to contemporary audiences. It also connotes a sense of abandonment and relates to the negative, violent related word ‘invades’ mentioned earlier.

The phrase ‘raging sea’ symbolises his emotions and makes the audience think of the rage of the strong king witnessed earlier in the play. An example of Lear’s rage as a strong king is when he insults Gonerill: “[Lear] (1:4:277)

Into her womb convey sterility!… /A babe to honour her! ” this shows that women’s role in Shakespearean society was to bear children even though Gonerill is the king’s daughter this is seen as her only purpose. This appeals to modern audiences too because it is too seen as an insult even though women have more rights.

In interpretation of how these lines would be acted, it could be showing that Lear is losing control with his words here. Whereas in the extract with the use of exclamatives it shows that Lear doesn’t now posses rage to the same extent, he is more lethargic and calm. The emphasis is on confusion when he conflicts himself to later in the extract:”Your old kind father, whose frank heart gave all,–/O, that way madness lies; let me shun that;” which shows the theme of madness because he addresses himself in the third person and is self pitying himself a result of his vulnerable state. Let me shun that’ emphasizes revenge with repetition of the word ‘shun’ and doesn’t take blame for his actions. Read about foreshadowing in King Lear essay

The speech also shows Lear’s vulnerability with the lack of power: “When the mind’s free, /The body’s delicate: the tempest in my mind/Doth from my senses take all feeling else” this appeals to the theme of aging because his body being delicate opening his mind to senility or realization of the conspiracies against him. A quote that relates with this is before the extract starts “Wilt break my heart? which emphasizes his vulnerability because the people he trusts most have betrayed him and in his state of mind he feels he needs to ask Kent will he do the same. This makes the audience sympathize with Lear’s emotions and predicament and also conveys the stereotypical tragic genre especially in Shakespearean time because even though he is portrayed in a way that conveys a quite ruthless dictator with a great deal of power at the beginning of the play the loss of his possessions, family and sanity makes the audience sympathize with him and his grief.

This apart of the cleansing process that the storm metaphorically represents when there are references to rain and crying, ‘weep’ and ‘pour on’. These quotes from the extract also emphasizes the fall relating to the kingdom and his family bond breaking, causing him grief. Although, on the other hand a modern audience do not relate and sympathize with those that have nobility as much as in a domestic tragedy.

In this modern era, tragedy has a fundamental change that was the rejection of Aristotle’s dictum that true tragedy can only depict that with power and high status. In the 21st Century, people do not relate with people that have a lot of power and/or status. An American playwright and essayist called Arthur Miller wrote about ‘Tragedy and the Common Man’ which exemplifies the modern belief that tragedy may also depict ordinary people in domestic surroundings.

This line also inverts the authority expected the by audience because Kent being a server of the King should not have that authority over him. Shakespeare uses this along with various imperatives that follow (“Good my lord, enter”). The word ‘lord’ who shows respect and that Kent is only looking out for Lear. This contrast with the Lear portrayed at the beginning of the play who is dominates proceedings; “Give me the map there (Act I, Scene I). “ 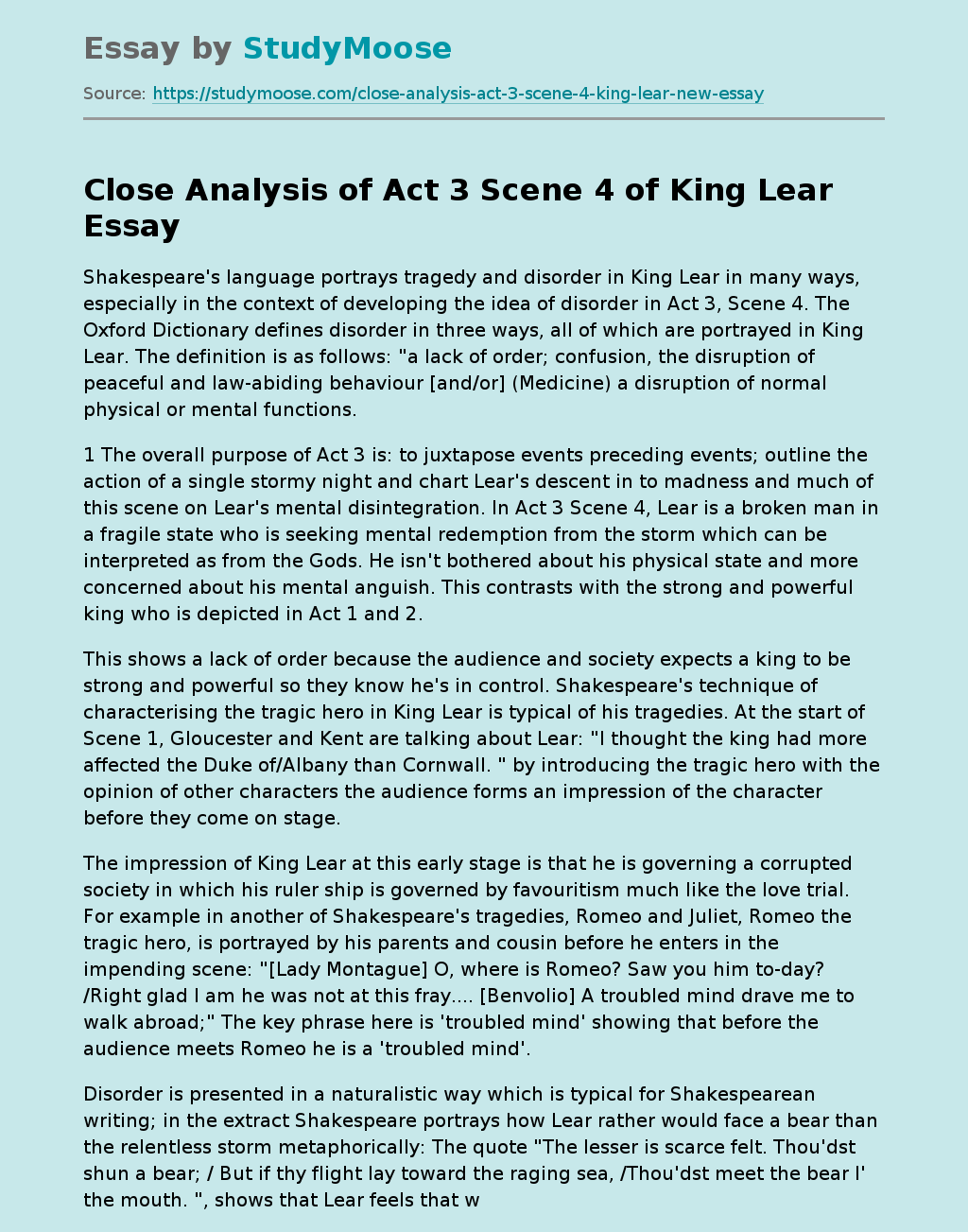