Climaxes or anticlimaxes in Enduring Love

Don't use plagiarized sources. Get your custom essay on
“ Climaxes or anticlimaxes in Enduring Love ”
Get custom paper
NEW! smart matching with writer

McEwan continually references “sweat” in chapter 22 showing the physical exertion in each of the characters “sweat was beading on his forehead” illustrates the tension between Jed, Joe and Clarissa. Each reference to sweat made by McEwan reveals a subtle increase in the volume, beginning with “beading” ending with “rolling off Parry”. This is reflective of the tension of the climax as it builds up.Clarissa is given a voice in this chapter which shows how frightened she is but also reveals more about Joe’s character.

The novel is told through the narrative perspective of Joe Rose, therefore Clarissa’s dialogue is under his control meaning that Joe is in full control of her voice and is able to dictate how the reader perceives her. Her small voice reveals that Joe sees her in as vulnerable. This portrays to the reader, Clarissa as a victim of both the situation and the narrative, creating sympathy for her within the climax. This is significant becauseit adds an alternate perspective to the novel.

The sympathy created here is later emphasised in chapter 23 in which Clarissa finally gets an undistorted voice.McEwan continually uses sense in chapter22 which makes the scene more dramatic adding to the climax and is implies a rush of adrenaline which heightens the senses.

The description “she was still, but ripples of muscle and tendon at the base of her neck suggested that she was coiled” “I could hear my heart under my shirt” adds to the tension of the chapter which makes this particular climax significant as it creates a vivid image for the reader. Most of McEwan’s description revolves around tension, of the situation, of muscles; this subsequently builds tension within the reader, adding to the anticipation of the climax. As the novel draws to a close,McEwan finally clears the mystery of Jed Parry’s nature. This is significant to the climax as it dramatically changes the reader’sperspective on Jed, and perhaps the entirety of the novel. In Chapter 22, Jed is revealed to be a harmless soul, not at all a treat. All Jed wants is forgiveness from Joe “please forgive me, Joe, for what I did yesterday” which in a way acts as an anticlimax as the novel builds Jed up to be a harmful man with a vendetta,yet in actuality, all he wants is forgiveness. Joe is insistent on playing the hero, but is portrayed as being petrified of using a gun. Clarissa doesn’t seem to be pleased that Joe wanted to play the hero, nor does she see him as a hero which dulls the poignancy of the climax. Also Joe seems to be playing the anti-hero and Jed, the anti-terrorist. This is significant to the novel as it is juxtaposed to the stereotypical thriller/romancewhich the novel partially aims towards.

Climaxes or anticlimaxes in Enduring Love. (2016, Mar 04). Retrieved from http://studymoose.com/climaxes-or-anticlimaxes-in-enduring-love-essay 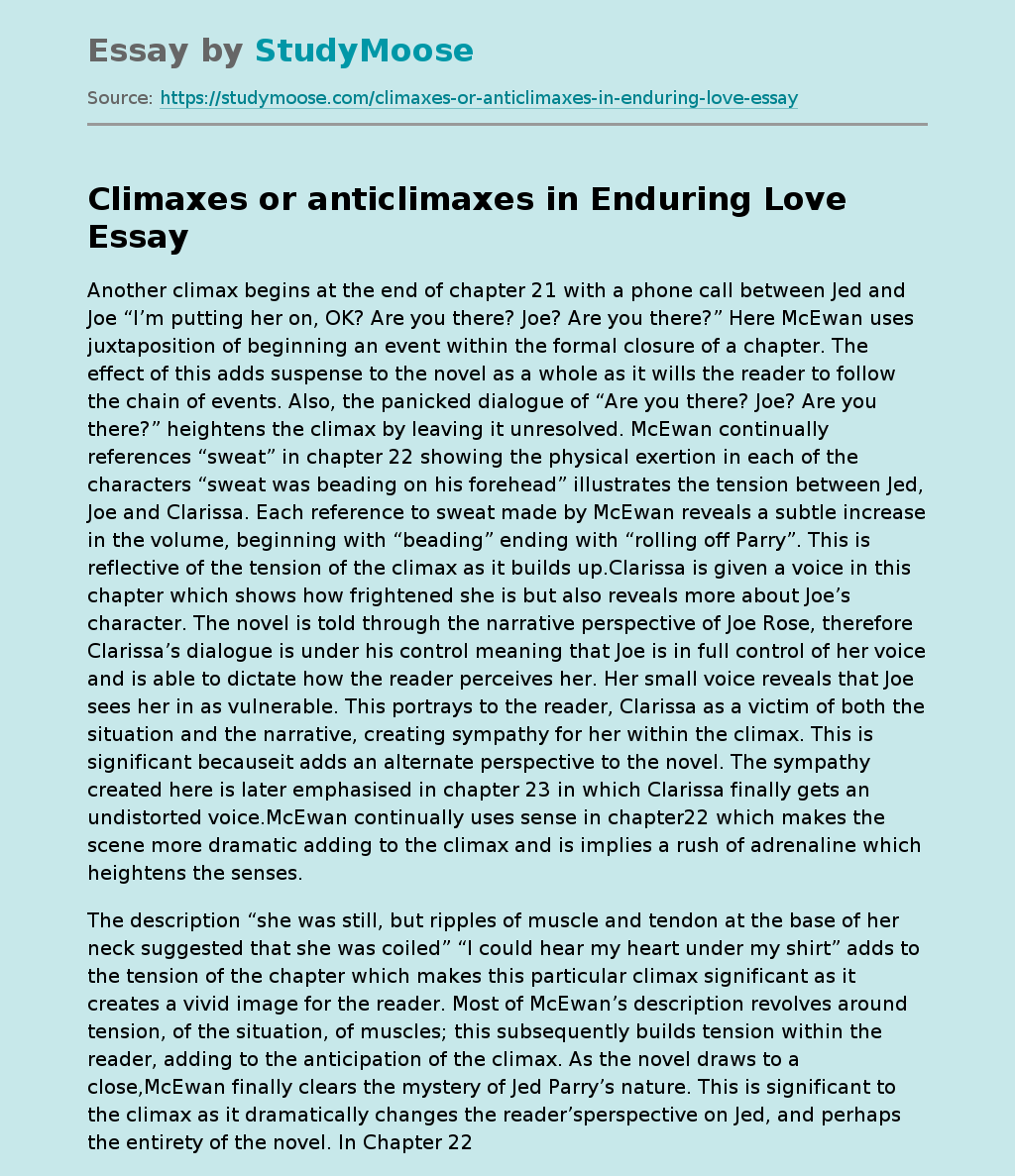