Rooftop material as a result of changing climate in Muusini Location

Rooftops of corrugated iron sheets was 85 percent and 15 percent grass thatched rooftops confirming that drought had affected the lifestyle of Muusini community. Iron sheet rooftop was preferred because households harvested rainwater during rainy seasons and stored for use during dry period especially in the months of August to November. Changing climate had also affected the availability of local materials for roofing specifically the availability of quality grass for thatching which was ideal for the area because of high temperatures.

Don't use plagiarized sources. Get your custom essay on
“ Climate Change and Alternative Energy Resources in Muusini ”
Get custom paper
NEW! smart matching with writer

Makueni County Integrated Development Plan, (2013) reported that the roofing materials in the County included iron sheets accounting for 86.4 percent while at national level was 73.2 percent, grass rooftops was 11percent and 0.3 percent at National level. Other roofing materials were tiles with 0.8 percent, asbestos was 1.2 percent, tin was 0.1 percent and makuti was 0.2 percent. Our study parallels the County report about iron sheet and grass rooftops which were the most popular in the Muusini Location.

The IPCC reported impacts on the environment as a result of climate change, land and water degradation especially in Sub-Sahara Africa. Land degradation lead to reduced grassland affecting livestock feed and roofing material.

Approximately 12 million hectares of land become barren yearly due to drought although land degradation may also result because overgrazing, high temperatures, erratic rainfall and clearing of vegetation (Sanchez, 2016). The minority of respondents who had grass rooftops confirm scarcity of local thatching materials in Muusini Location. Lack of grass in Makueni County was also reported in 1984 and 2009 drought were people lost their livestock (Amwata et al., 2013).

SOURCES OF ENERGY FOR COOKING, LIGHTING, AND COMMUNICATION IN MUUSINI LOCATION, MAKUENI COUNTY

Residential energy use is a major energy consumer in the world with 27 percent of the total energy supply globally. Energy sources may be fossil or renewable. Renewable energy includes solar photovoltaic, wind, and bio-fuels while fossil fuels comprise of natural gas, coal, and oil products. Approximately, 75 percent of the residential energy is used for cooking and heating (Nejat et al., 2015). This chapter presents the findings of energy for cooking, communication and lighting in Muusini rural households. The data will be presented by use of graphs, photographs.

Source of energy for cooking

The photograph shows firewood for cooking/lighting that has become scarce for most of the households. Cutting down of specific tree species is a common practice because they are preferred for firewood. Some of the respondents sell firewood as an alternative income for the family. The preference of some species has led to extinction of tree species especially hard wood thus changing the biodiversity of the area. Use of fuel wood has led to clearing of vegetation exposing bare land to soil erosion.

Three-stone open fire was the dominant technique for cooking at the site of the study. The technique requires a lot of wood and cooking takes place in a kitchen. There were a few respondents who combined wood fuel and other sources of energy like charcoal or kerosene. The open fire technique exposes people to accidental burns from the open flames especially children and epileptic persons. The cooking pot, the stones, and the wall are black in color confirming indoor pollution as a result of smoke/soot produced combustion process of wood. Fuel wood leads to indoor pollution that affects mostly mothers and children.

Scarcity of firewood was reported and lack of firewood may result in undercooking of food or skipping meals. The kitchen a gathering place for family members in the evening (Otte, 2014). The current study confirmed that cooking took place in the kitchen a behavior that may change if solar box cookers technique was accepted. Solar box cookers were not available during the tim 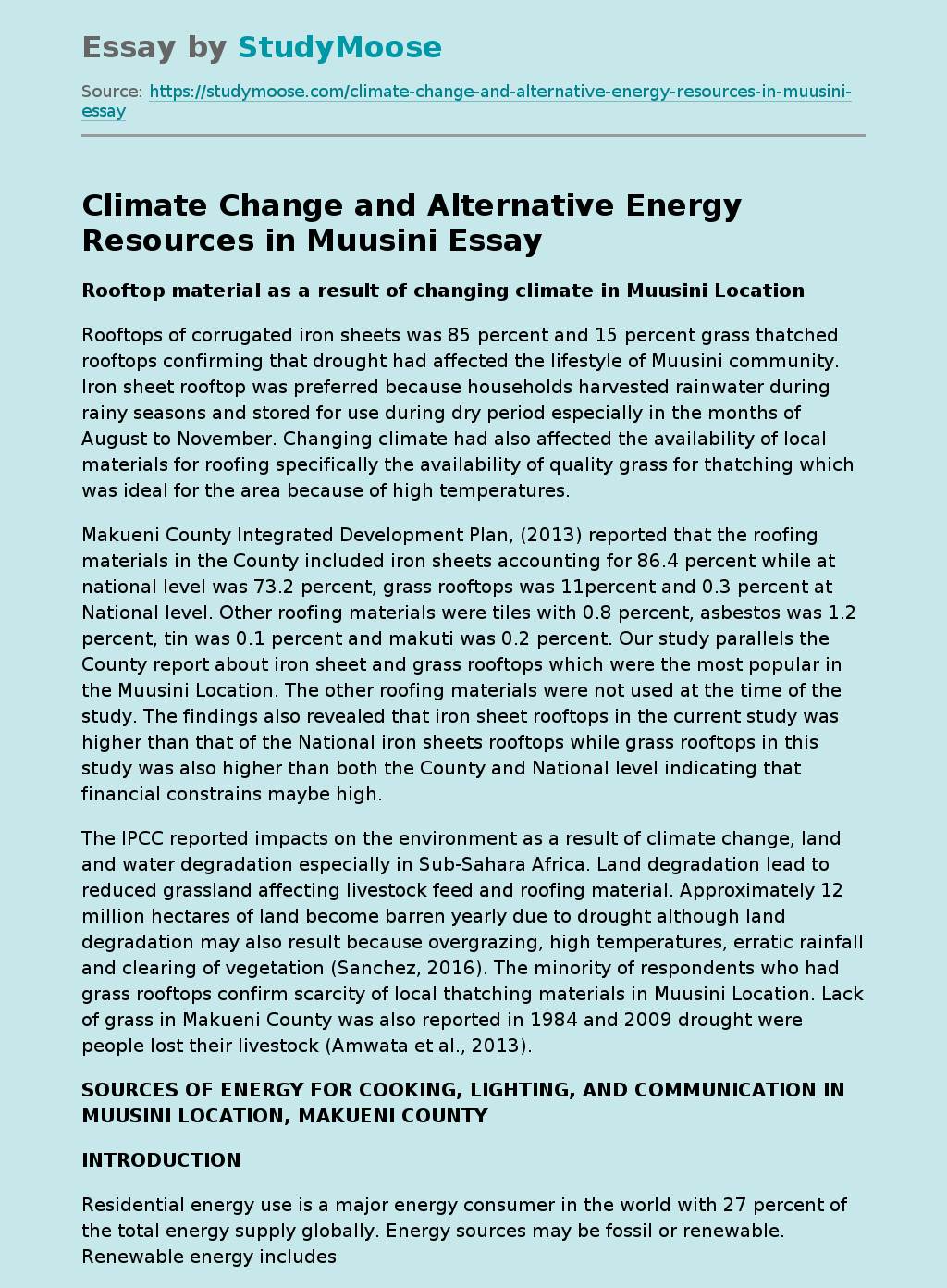