Cleopatra quickly weaves an intricate yet sarcastic response to the possibilities of the incoming news, whether it is from the “shrill-tongued Fulvia” asking to do his bidding or even a “dismission” from Caesar. Antony, unknowing of her true intentions continues to praise the matriarch and her kingdom, eagerly hoping to show her that his interests do not lie in elsewhere even going so far as to condemn the “ranged empire [to] fall”.

The contemporary audience would have undoubtedly been shocked to hear a man of such nobility and power to easily withdraw from his origins in Rome and closer into the arms of the temptress.

Don't use plagiarized sources. Get your custom essay on
“ Cleopatra’s moods ”
Get custom paper
NEW! smart matching with writer

It was her ability as a dramatist who would oscillate from one emotional extreme to the other that could puppeteer the likes of Antony who couldn’t see past her façade. Within the extensive dichotomy, the alternation of scenes between Roman and Egyptian values is also met with a similar alternation of Cleopatra’s moods.

In his absence Cleopatra adamantly searches for Antony’s company, only to reject it when he appears – revealing the extent to which her actions are manufactured to draw the unsuspecting Antony. Despite being reprimanded by Charmian, Cleopatra continues to manipulate Antony; “if you find him sad, say I am dancing; if in mirth report…sick”.

By presenting her as dancing during his sadness, she may hope that he inquires and participates in her joy but if presented “sick” when he is in “mirth”, Antony would undoubtedly show concern and dote upon her, removing any previous thought and dedicating him to Cleopatra’s every whim.

Surprisingly it is her constancy in being inconstant which is her most identifiable characteristic and one that presents her as a transcendental lover – the loss of Antony which spurs her to join him in death – their movement between “love and renunciation” [French] presenting the greatest realism in Shakespeare’s work.

Despite the postmodernist and consequently feminist views of Cleopatra which become more eagerly sympathetic to the matriarch defines her as a powerful tactician, her control is ultimately destructive and becomes a flaw. Her continual control and consequent emasculation of Antony – influencing him away from his “masculine” Rome is quickly identified as “poisoned hours” that “bound [him] up” from his own self. The use of poisoned would suggest that the carnal love which the pair share is self-destructive and share no deeper inherent meaning. In time Antony’s oscillation is evidence to the faltering of their love in that he blames Cleopatra for the defeat at Actium, even threatening wildly to kill her.

Though she had failed in maintaining control over Antony, she quickly remedies the situation, shedding tears which “instantly melt his anger” into a “hollow-sounding heartiness” [French]. Thus it becomes evident that any weaknesses that Cleopatra exhibits is a result of her overpowering strengths and that she has the uncanny ability, as Enobarbus suggests of turning even her defects into her strengths.

Despite being dominated in the fundamental conflict within the novel between the three triumvirs in their inherently “masculine” aim for dominance, Cleopatra’s forte appears in the form of emotional control which is summarised through the volatile relationship of Anthony and Cleopatra: the fusion between the antithetical personalities, the former which embodies “order, morality and maturity” of Rome whereas the latter embodies the “chaos, immorality and immaturity” of Egypt. Cleopatra is ultimately flawed in comparison to the ideal feminine form of the Elizabethan society yet Shakespeare presents her as a triumphant tragic figure who possesses immense emotional power. 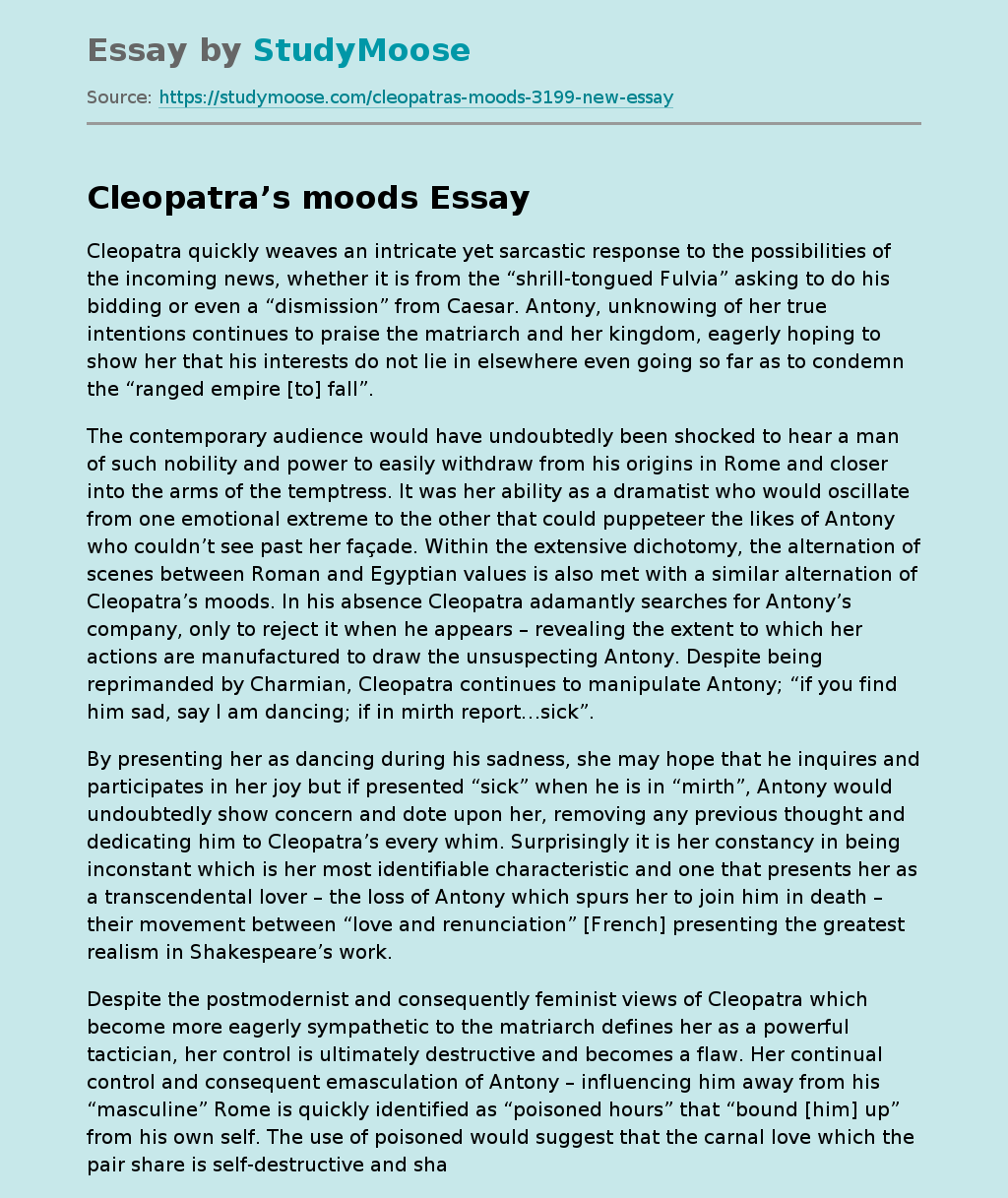