What happens to Marcus Licinius Crassus & Pompey after the slave rebels of Spartacus?
The year after, they are both elected consuls. Pompey also leads military campaigns in the East and defeats King Mithridates of Pontus in 63 BCE
Who was Cicero?
He was born in 106, compared to Caesar in 100. He was born in Arpinium and comes of no particularly noble background. Like Marius, he is a “new man” self-made
Who are the two “new men”?
Marius, the general who was exiled by Sulla, and now Cicero.
Don't use plagiarized sources. Get your custom essay on
“ CLCV 116 Exam 2: Catiline’s Conspiracy and Cicero ”
Get custom paper
NEW! smart matching with writer
What professions did Cicero attain?
He studied in Rome and Athens, and became a well-known orator & lawyer by defending/prosecuting the rich and famous. He becomes quaestor, aedile, praetor, and his next goal is consul.
Candidates for the 63 BCE consulship (3): two are patrician, one is not
1) Gaius Antonius Hybrida
2) Lucius Sergius Catilina (important)
3) Marcus Tullius Cicero (important)
How do Hybrida and Cataline campaign?
They campaign in places where they should win because they are patrician, as opposed to Cicero who was not.
Get quality help now
Marrie pro writer

+84 relevant experts are online
Hire writer
What are the results of the campaigns?
Antonius narrowly beats Catiline and Cicero wins as the leading figure – the consulship that year was decided.
In 63 BCE, the office of pontifex maximus opens up and who claims it?
Gaius Julius Caesar campaigns and bribes his way up to win election as the chief priest of the city.
Why does Catiline want to run again to again for consulship in 62 BCE? (3 reasons)
1) Great debt amassed in family and therefore no reliability
2) No political prospects, since they lacked money
3) He was just an ambitious dude

Catiline himself was risking bankruptcy in order to distribute bribes, so losing would be TERRIBRU

What was Catiline’s campaign platform?
He claimed he championed the cause of those who were poor (like criminals and reprobates): “cancellation of debts and redistribution of land!”
What passions were Catiline prone to that made him seem like a bad person?
He was very lustful – he had a thing with a maiden of noble rank, a priestess of Vesta, and Aurelia Orestilla whom “no good man ever commended anything save her beauty”.
Get to Know The Price Estimate For Your Paper
Topic
Number of pages
Email Invalid email

What did Cataline organize after losing consulship?
Secret meetings were held in Rome, people met secretly at night at specific houses of noble –> poor citizens to plot against the State in order to overthrow the government.
What was Cataline’s ultimate plan with organizing his conspiracy?
He planned to organize an army outside the city in Etruria, to the north – with this army, he planned to kill the senators, burn the city, and then move north join the army in Etruria
When and What does Cicero initially do when he finds out about the conspiracy?
October 63, Cicero passes an SCU (Senatus Consultum Ultimum) and authorizes himself to do what is necessary to ensure that the Republic comes to no harm
What does Catiline plan to do in November?
In November 7, Catiline planned on murdering Cicero with his conspirators. However, Cicero was informed and placed bodyguards outside his house.
What happens on November 8, the day after Cicero was planned to be murdered by Catiline?
Cicero convenes the Senate to meet at the Temple of Jupiter Stator (“who stops”) and informs them of the conspiracy – Catiline himself is present.
First Catilinarian Oration =
Cicero’s speech where he denounces Catiline as a conspirator and enemy of his fatherland. Catiline flees to join the army in Etruria
Second Catilinarian Oration =
November 9, Cicero delivers the Second Oration to the people’s assembly
Third Catilinarian Oration =
December 3, Cicero delivers the Third Oration to the people’s assembly – reveals that there is written evidence of conspiracy
How did written evidence of Catiline’s conspiracy fall into Cicero’s hands?
Catiline and his followers arranged for the Gauls to join in and attack Rome – letters were intercepted and brought to Cicero. 5 of Catiline’s associates were arrested, but not Catiline himself
Tullianum/Carcer =
A jail cell where prisoners were kept efore execution – they were lowered through an opening into the lower dungeon, really bad conditions
Fourth Catilinarian Oration =
December 5, Cicero delivers Oration to the Senate and argues that the prisoners should be executed without a trial
The two “sides” of the debate of Cicero’s Fourth Oration
1) Senate opposed death penalty, along with Julius Caesar and want exile
2) Cato and Cicero want death penalty
The results of the debate for the fourth oration
Cicero carries out the executions personally by strangulation, and he is proclaimed FATHER OF THE COUNTRY (pater patriae)
Reactions of Catiline’s followers after the fourth oration’s actions were delivered:
Catiline’s army in the north had already diminished, as the soldiers fled when news spread about the punishment in Rome. The conspirators were caught between two Roman armies and died in battle along with Catiline
Pater patriae =
Father of the country
Catiline’s Legacy (4 things):
1) He wasn’t as bad as a guy as Cicero portrayed it, as it was his own perspective 2) Catiline died an honorable death: “he was found far away from his own soldiers among the corpses of his enemies.”
3) Cicero later admits that Catiline was “enigmatic”, people obviously found qualities they liked and therefore followed him.
4) Catiline’s platform wasn’t that different from Gracchi who wanted reform – opposed by the senators staunchly
Gladys Mclaughlin
Share 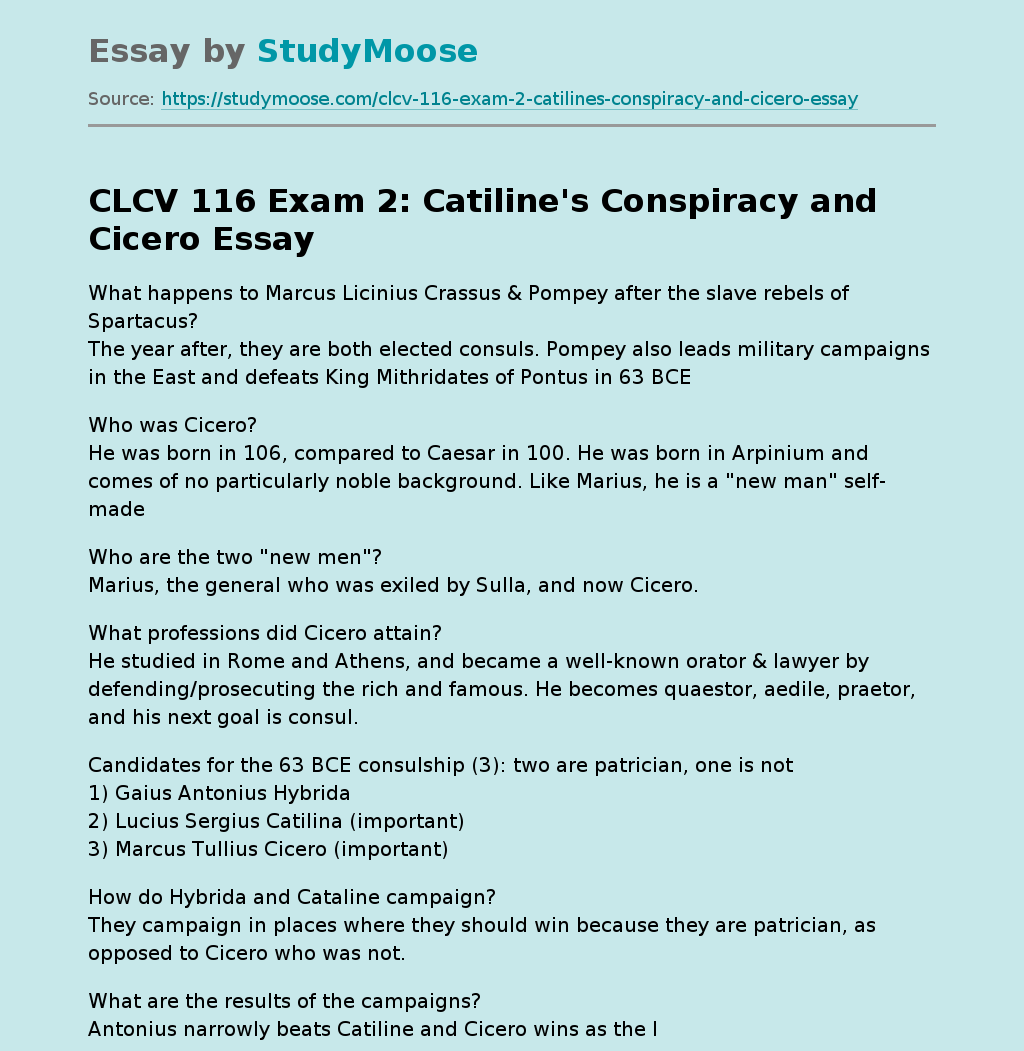