Episode V ,”The Universe of Battle”, of The Civil War series directed by Ken Burns reflects on how the Battle of Gettysburg in 1863 was a major turning point in the Civil War. He details how the Union defeat at Gettysburg, the work of women, and the entry of black men into the Union army enabled the North to significantly weaken the Confederacy. The Union and Confederacy both suffered thousands of casualties in the bloody battles that took place. However, by the end of 1863, the North was led to a “new birth of freedom” while the South had to come to the realization that the “bottom rail was on top”, now.

Burns begins the episode with the first of three battles that took place in the rural town of Gettysburg, Pennsylvania on July 1, 1863. The Union was led by Commander Meade who served under General Grant and the Confederacy by General Lee. Due to Lee’s commanders not delivering tactical support on the first day of battle, the North was able to hold their high ground, but did this not compare to what was going to happen in the following two days.

The second day of battle the number of soldiers present in Gettysburg grew substantially, on both sides. A significant part of this battle is when the Union stopped the Confederacy form gaining position of Little Round Top. This was long day of battle, whole regiments in the Confederacy were lost this day. By third day of battle Lee was acting as if he was invincible and this was detrimental for his men.

Union soldiers slaughtered the Confederacy and they never entered that far into Union territory again. Lee had failed his men and he knew it.

This must have been very hard on Lee. It was shocking to hear that he tried to resign after he lost this battle. I thought it was very interesting that the Confederacy’s need for shoes is was what led them in to Gettysburg. I bet they never thought that the result of this stop would end up in 150,000 men fighting 51,000 men dying in the greatest battle ever fought in the northern hemisphere. The actual pictures, paintings, and simulated video used while describing these battles were really good and the helped me to gain a sense of what it was like to be there. I also enjoyed the irony in the fact that the North entered Gettysburg from the south and the South entered from the north. It was also interesting that the troops fighting over the Little Round Top were both from equal distances from Gettysburg in the opposite directions.

Next, the importance of women supporting the war was examined. Women not only held down the farms and houses when the men were off at war, but many women also left their homes to care for the soldiers. In the north women started the Sanitary Commission and demanded better treatment and better food for the soldiers. This commission was made up of hundreds and thousands of women. In the south Sally Tompkins and a staff of six, nursed 1,333 wounded men. Unlike the North, the South did not have a Sanitary Commission and most men were treated in houses.

In the north, Mary Ann Bickerdyke was a important female figure in the war. She traveled with the Union army for four years and sixteen battles. General Sherman stated, “She ranks me”. This statement by Sherman was extraordinary, especially for this era. It makes me happy that she received the credit that was due to her. Many women served as nurses, food gathers, and cooks, but I am exceptionally impressed with Mary Ann Bickerdyke’s story. I imagine she gave up a lot and the fact that she stayed strong during all of the gruesome battles she saw really says a lot about her character.

Following the role of women in the Civil War, Burns details the forty-eight day siege of Vicksburg. During this battle the residents of Vicksburg were cut off from the world and were in desperate need of supplies. When Union had control over the well being of the Vicksburg residents, 31,000 Confederate soldiers under the command of General John C. Pemberton withdrew due to the concern of the health of the Vicksburg residents. The Union victory of this battle was significant because the Confederacy was now cut in two. I was surprised that Pemberton was a northern man fighting for the Confederacy. I would expect that soldiers would support their states. I also found it very interesting that after this siege, the fourth of July would not be celebrated in Vicksburg for eighty-one years.

That is just crazy to me! Burns goes on to examine the first black regiment and the first federal draft call. In New York, a mostly Irish mob held an uprising over the draft. They were opposed to abolition because they feared blacks taking their jobs. It also made them angry that the draft favored the rich in that they could easily hire substitutes to take their place. Meanwhile, the uprising in New York was ended and the enlistment of the first blacks into the Union army had begun, this was a huge blow to the Confederacy. However, the blacks did not receive fair treatment, but they were key to the war. I am not surprised that black soldiers would fight without pay, but it was surprising that they declined it because it was not equal to the pay of the white soldiers. I like the pictures of the black soldiers.

You could see by their facial expressions that their pride was different from that of the white men. In some of their pictures some of them were actually smiling unlike the pictures of white soldiers I have seen. I think it because they were truly happy to be fighting for their cause. Frederick Douglass put it best when he stated that blacks were, “the pivot upon which the whole rebellion turns, this war, disguise it as they may, is virtually nothing more or less then perpetual slavery against universal freedom and to this end the free states will have to come.” The 650 men of the all black 54th Massachusetts regiment proved to the Union that blacks were useful soldiers during the battle at Battery Wagner in South Carolina. Even though the Confederates were ahead in this battle, the battle ultimately ended in a protracted siege that was enabled by the 54th. It was because of their battle other black regiments were deemed worthy to fight.

Finally, the episode ends with Lincoln’s Gettysburg Address. On November 19, 1863 Lincoln delivered one of the most memorable speeches in American history. Lincoln declared the love he had for his people and his unwavering pursuit for equality in just 269 words. I never realized that this speech was just a “side speech” at a dedication ceremony. It is almost unbelievable that Lincoln thought that this was a failed speech considering that even today most Americans know at least the first line of the Gettysburg Address. It is a shame that the photographer was not able to capture him delivering his speech, it would have been a great image to reflect upon today. 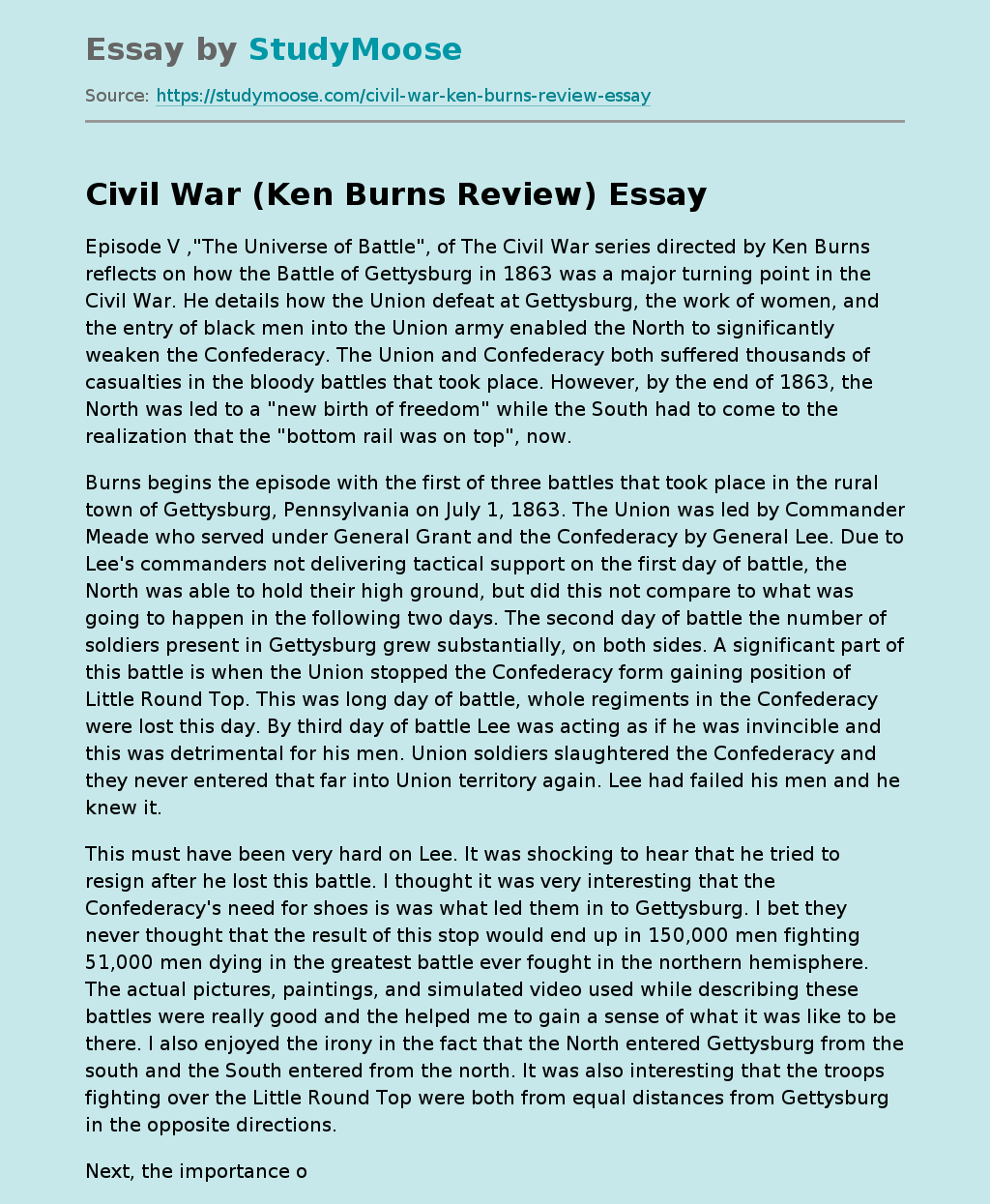