Achieving equal rights for African Americans was an ongoing battle since the days of slavery. Following the passing of the 13th Amendment, which emancipated black slaves, Congress also passed the 14th and 15th Amendments, granting African Americans citizenship and voting rights. However, African Americans still faced a plethora of discrimination and violence, causing people such as W.E.B. Du Bois and Marcus Garvey and groups like NAACP to fight for full equality. The civil rights movement of the 1950s and 1960s had its beginnings in 1947 when President Truman created the President’s Committee on Civil Rights, but it gained momentum in 1955 when Rosa Parks refused to surrender her bus seat to a white person.

From there, the Montgomery bus boycott was launched and the mass movement for the equal rights of African Americans truly began. Civil rights leaders like Martin Luther King, Jr. and Malcolm X proposed different strategies to obtain this equality, and a vast array of organizations formed to align with these strategies.

As time went on and African Americans grew impatient, some groups turned to more violent tactics. Though Congress passed the Civil Rights Act of 1964 and the Voting Rights Act of 1965, there was still a glaring lack of opportunity for achievement and economic equality for black people. The movement tapered off in 1968, with the passing of the Fair Housing Act. The civil rights movement of the 50s and 60s was successful in giving African Americans all of the same rights as white Americans. Despite racist attitudes and poverty that continued to exist after the movement ended, it was a necessary and significant stepping stone for progress to occur.

Despite decades of fighting for equal rights, the civil rights movement gained momentum in 1955 with the Montgomery bus boycott and continued to grow as Martin Luther King, Jr. became a prominent figure in the movement. The movement had its beginnings in 1947 when President Truman created the President’s Committee on Civil Rights, and started escalating in 1954 with the Brown v. Board of Education Supreme Court decision, which made segregation illegal in public schools. However, it took off in 1955 when a black woman named Rosa Parks refused to give her seat to a white man, leading to a year-long boycott of the buses. Martin Luther King, Jr. led the black people of Montgomery in unified protest until the Supreme Court mandated desegregation of the buses. In 1957, King and a group of ministers formed the Southern Christian Leadership Conference (SCLC), which brought thousands of African Americans together to rally against their second-class citizenship. Advocating for a nonviolent fight against racism, SCLC and King encouraged black people to organize sit-ins, which would “create such a crisis and foster such creative tension that a community that [had] constantly refused to negotiate is forced to confront the issue” (Martin Luther King, Jr.: “Letter from Birmingham City Jail”). Using this same strategy, King launched nonviolent demonstrations in Birmingham, Alabama. This caused the Commissioner of Public Safety, Eugene “Bull” Connor, to bring out armed men to attack the protesters. His brutality was displayed on televisions nationwide, appalling many Americans. Additionally, over 200,000 protesters gathered for a March on Washington in 1963, witnessing King’s famous “I Have a Dream” speech. President Kennedy proposed a bill that would prohibit segregation in public facilities, worried that African Americans may shift towards violence. The results of the Birmingham campaign and the March on Washington showed black people that progress towards attaining full equality could be made without returning the violence they received from white people.

African Americans grew impatient as limited reforms were implemented, leading to the Black Power movement. After Kennedy’s assassination, Lyndon B. Johnson became president, and wanted to prove himself to liberals. As a result, the Civil Rights Act of 1964 was passed, banning segregation in public facilities and discrimination in employment based on race, religion, gender, or national origin. However, the Civil Rights Act did not grant black people the right to vote. Members of the Congress of Racial Equality (CORE) and the Student Nonviolent Coordinating Committee (SNCC) created the Mississippi Freedom Summer Project of 1964 to help register blacks to vote. King and the SCLC planned protests in Selma, Alabama in 1965 to garner attention. During the march from Selma to Montgomery, the sheriff beat and arrested thousands of protestors. The violence was again displayed on national TV, sparking anger and support for the voting rights of African Americans. Consequently, the Voting Rights Act was passed, overruling any tests used to deny people the vote. Regardless of the advancements made, African Americans still did not have the same economic and achievement opportunities as white people, and some groups turned to violence. Just after the Voting Rights Act was signed, a disastrous race riot broke out in Los Angeles, and many more followed. Young African Americans demanded Black Power, through any means necessary, since the government’s actions thus far were inadequate. Malcolm X, a member of the Black Muslim faith, advocated for separatism and armed self-defense. He believed that “a revolution is bloody. A revolution is hostile” (Malcolm X: “Message to Grassroots”), and that black people should not stand by peacefully as they were treated as second-class citizens. CORE and SNCC left their nonviolent beliefs behind and the Black Panther Party for Self Defense was founded in 1966, often engaging in violent and illegal activities. Though not all organizations shifted away from achieving integration peacefully, the ones that did played a vital role in celebrating black pride and drawing attention to black rights.

Efforts by to achieve civil rights for African Americans date back to the Emancipation, but were not as successful as the civil rights movement of the 50s and 60s. The Thirteenth Amendment, which abolished slavery in 1789, marked the beginning of African Americans gaining civil rights. It was followed by the Fourteenth and Fifteenth Amendments, granting them citizenship and voting rights, respectively. Even though this proved to be a huge step towards equality, the Jim Crow laws in place in Southern States blocked African Americans from many rights. In comparison to the passing of these three amendments, the civil rights movement of the 50s and 60s was far more revolutionary. This is because it was led by the African Americans themselves, rather than the all-white government. Black people united across America to achieve full equality and succeeded, unlike previous attempts. For example, responding to lynching in 1892 members of the Colored Farmers’ Alliance rallied in resistance, W.E.B. Du Bois led the Niagara Movement to fight racism and and helped to found the NAACP, and Marcus Garvey formed a movement in the 1920s encouraging blacks to return to Africa. However, these efforts did not result in any major changes during those time periods, whereas African Americans later gained many rights in just under two decades. There are numerous reasons for the success of the civil rights movement of the 50s and 60s. First, in World War II, black soldiers were allowed to fight due to Executive Order 8802. Units such as the Tuskegee Airmen fought admirably and gained respect after the war. When they returned home, black veterans continued to face bigotry and discrimination even though they had helped bring victory to America. Consequently, they started to push for equal rights. Additionally, the presence of television had an immense impact on the success of the civil rights movement. Previously, the violence that African Americans confronted was not commonly seen by people living in the North, but TV allowed people across the nation to witness the brutality. Ergo, support for civil rights began to include many white people. Finally, the Democratic Party became more liberal while it obtained more power after the Great Depression. Since the Republican Party was in power leading up to the depression, many Americans blamed it for the crash of the stock market, allowing the Democratic Party to step in. Also, the Democratic Party was becoming increasingly liberal. During the civil rights movement, the Democratic Party had the power and confidence to press for equal rights. Due to these reasons, the 50s and 60s saw great progress for the equal rights of African Americans as opposed to previous efforts.

The civil rights movement of the 1950s and 1960s resulted in African Americans attaining full equal rights. Attempts to gain equal rights for black people date back to the Emancipation, but the civil rights movement was by far the most successful because African Americans led it rather than the white government, black veterans pushed for rights after WWII, the liberalization and domination of the Democratic Party, and television. Although racism continues to exist in America, the civil rights movement played a key role in paving the way for advancements towards reducing discrimination and bigotry and achieving legal rights. 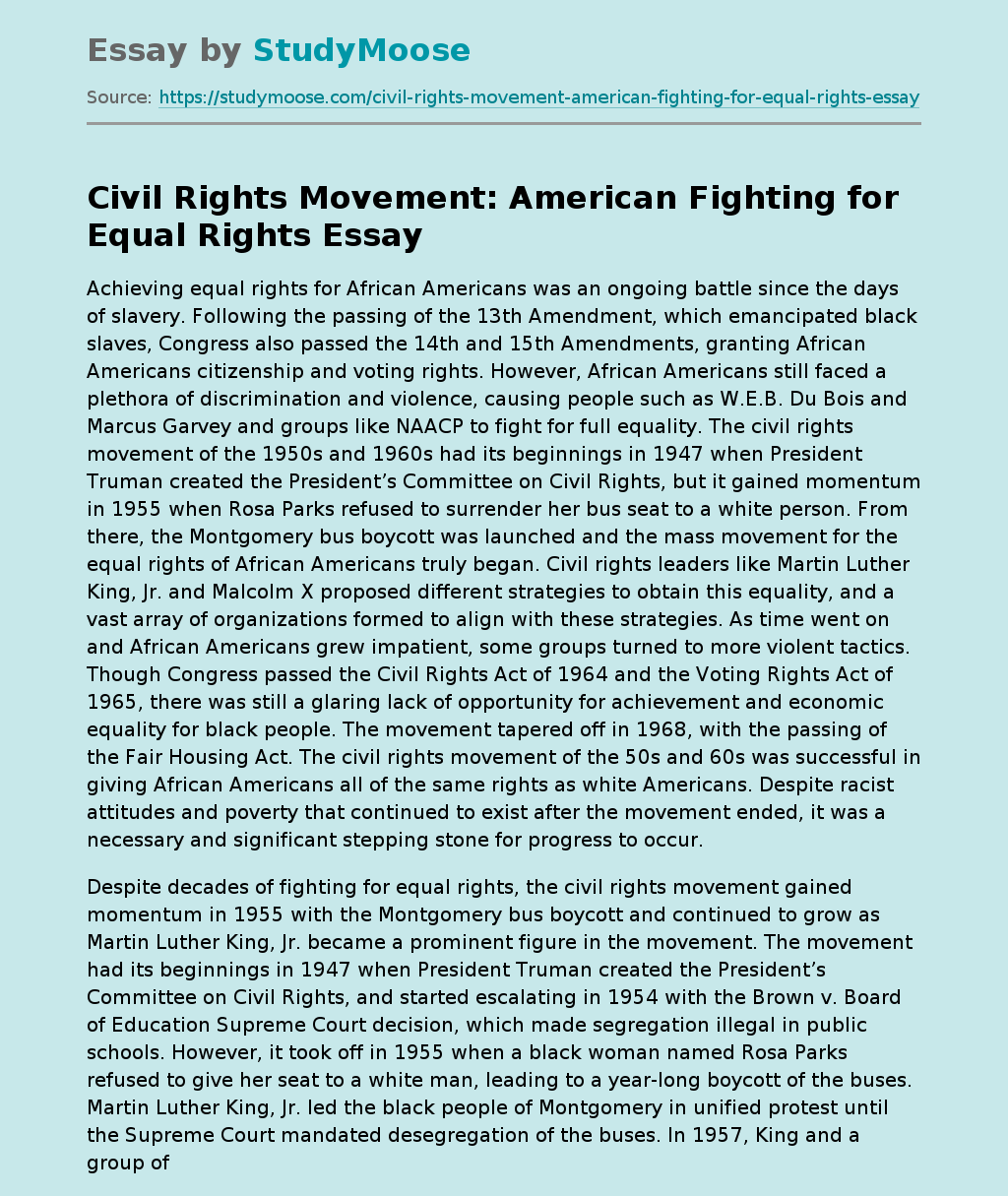