The Civil Rights movement was an ongoing fight for racial equality that took place for over 100 years after the Civil War from the years 1954-1968 (“Civil Rights Movement”).

Don't use plagiarized sources. Get your custom essay on
“ Civil Rights: Fight for Racial Equality ”
Get custom paper
NEW! smart matching with writer

The Civil War ended slavery but that did not change the fact that discrimination was still going on. Americans were trying everything they could to change the rights of blacks. It was a very long movement looking to enforce the constitutional and legal rights for the African Americans that were treated unfairly (“Civil Rights Movement”). Americans they did absolutely everything they had to do to help to gain their civil rights back. There were many leaders that helped the movement such as Martin Luther King, Jr., Booker T. Washington, and Rosa Parks that lead the non-violent protests which led to changes in the law. Those people have changed what civil rights and segregation is today and helped many people back then and to the people they are today.

The 14th and 15th amendment were the major laws that were enforced to help with the Civil Rights movement (Carson, Clayborne.

Brown vs. Board of Education of Topeka was a landmark the United States Supreme Court case in which the Court declared state laws establishing separate public schools for black and white students to be unconstitutional (“Brown vs Board of Education”). It all started on Dec 9, 1952, and ended on May 17, 1954, but it took a huge part in the Civil Rights Movement. There were many people involved through the whole trials.

Supreme Court Justice Earl Warren was the one who delivered the ruling in the landmark civil rights case for the Brown vs. Board of Education (“Brown vs Board of Education”). He said that segregation of public schools was a violation of the 14th amendment and was unconstitutional. Children back then were treated very unfairly in schools. In schools, they had separate water fountains for whites and blacks and certain classroom with the separate races. Warren ruled that racial segregation in all public schools were unconstitutional after all the terrible stuff happening in schools (Brown vs Board of Education”). The Court declared that white and African Americans were unequal. Earl Warren agreed with the civil rights authority that the fourteenth amendment was apart of the decision of the court’s final decision on the case to make sure that all the children were treated equal in all the schools. The Brown vs. Board of Education took a huge impact on the Civil Rights Movement.

There were many other people before Rosa Parks that refused to let their seat up but Rosa was the first to come to the public and the press. Many other important people in the civil rights movement were apart of the boycott such as Martin Luther King. Martin Luther King gave a speech on segregation between the different civil rights that went on during that time. “This momentous decree is a great beacon light of hope to millions of Negro slaves who had been seared in the flames of withering injustice. It came as a joyous daybreak to end the long night of their captivity. But hundred years later the Negro still is not free. One hundred years later the 1ife of the Negro is still badly crippled by the manacles of segregation and the chains of discrimination.” (“Civil Rights Era.”). Rosa Parks Bus Boycott lasted more than a year. Martin Luther King was brought into the Boycott and became one of the most important leaders in the boycott and overall through the civil rights movement (‘Montgomery Bus Boycott’ History.com). The Bus Boycott was affected by the civil rights movement because it was one of the first major movements that helped social change during the civil rights movement. Rosa Parks decisions on the Montgomery bus made a huge impact on what the civil rights and what segregation is today and how that affected many black people’s lives today. The Bus Boycott was so successful that local civil rights leaders decided to keep going with it and making more organization to help segregation. T

Lots of other people followed Martin Luther’s “I Have a Dream” speech to talk on their part and what they thought needed to change. Martin Luther King was one of the main people involved in the March on Washington. Martin delivered his “ I Have a Dream” speech on this day in front of millions and millions of people. The “I Have a Dream” speech was a speech Martin delivered to end racism (Carson, Clayborne.). Martin wanted jobs and freedom for the African American people in the United States. The March on Washington was successful in pressuring the administration of John F. Kennedy to initiate a strong federal civil rights bill in Congress (“March on Washington for Jobs and Freedom.”). During this event, Martin Luther King delivered his memorable “I Have a Dream” speech. The 1963 March on Washington had several precedents. “Now is the time to make justice a reality for all of God’s children. It would be fatal for the nation to overlook the urgency of the moment. This sweltering summer of the Negros legitimate discontent. will not pass until there is .an invigorating autumn of freedom and equality -1963 is not an end but a beginning. Those who hope that the Negro needed to blow off steam and will now be content will have a rude awakening if the nation returns to business as usual.” (“Civil Rights Era.”). Martin Luther King referred to this day as “The greatest demonstration for freedom in the history of our nation”(“Civil Rights Era.”). 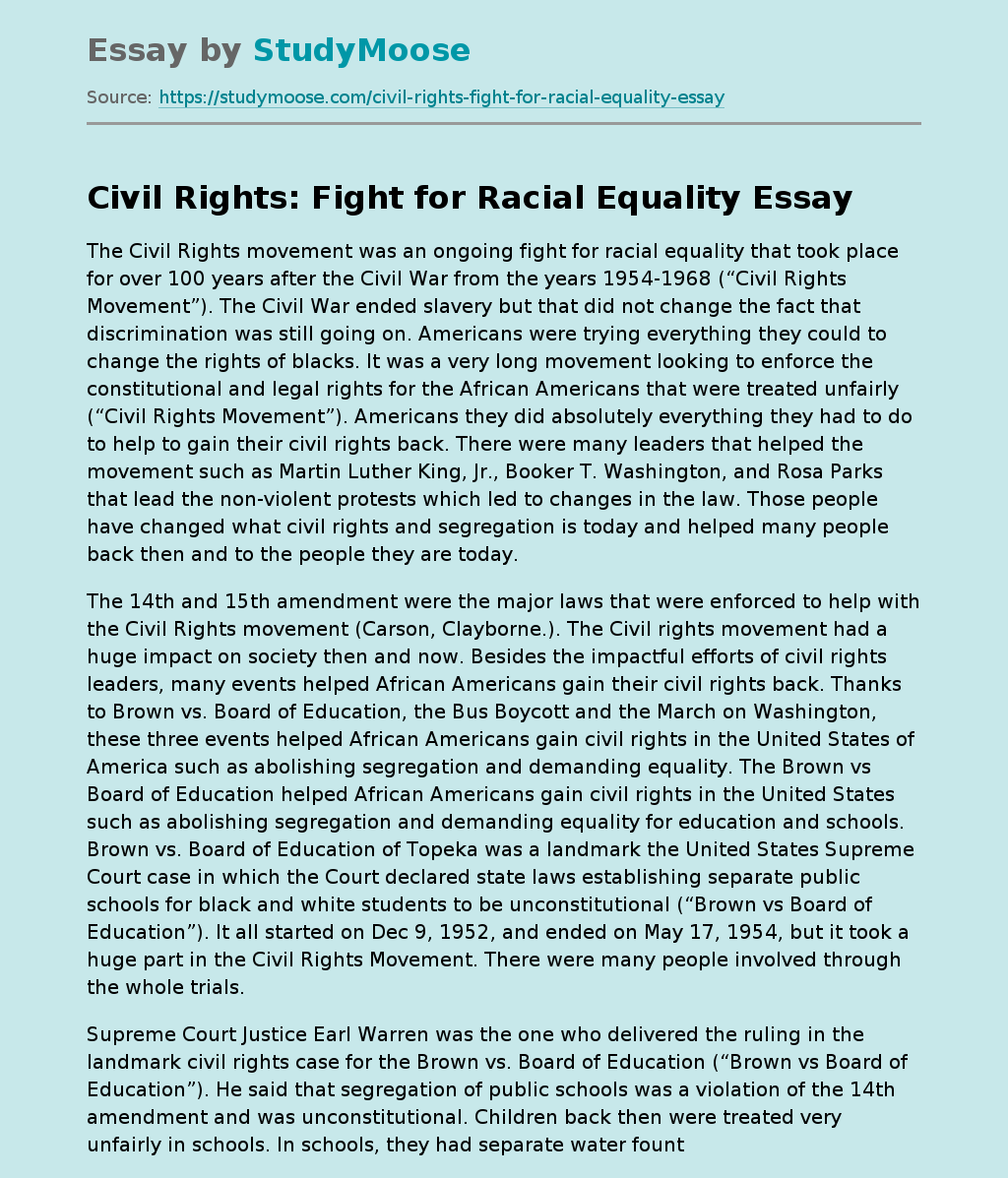