Teakolya Gibson May 29, 2014 MS 390 805 Civil Rights DBQ Essay The civil rights movement was a time period that can be defined as a large popular movement to secure for African Americans equal access to and opportunities for the basic privileges and rights of U.S. citizenship. The roots of the civil rights movement go back to the 19th century; the movement was addressed in the 1950s and 1960s. African American men and women, also whites, organized and led the movement at national and local levels.

Don't use plagiarized sources.
Get Your Custom Essay on Civil rights DBQ Just from $13,9/Page

They pursued their goals through legal means, negotiations, petitions, and nonviolent protest demonstrations. The largest social movement of the 20th century, the civil rights movement influenced the modern women’s rights movement and the student movement of the 1960s. In public schools African Americans faced inequality in their learning experience.

According to the document the inequality Blacks faced were they were not involved as much in school because of their race, even though physical facilities are equal and also other real factors could be equal, the programs deprive children from minority groups of equal educational opportunities.

From my understanding of the document, the Supreme Court ruled in favor of Brown and declared that segregation in the public schools was unconstitutional. The situation that led to Rosa Parks getting arrested was on December 1, 1955 is when she refused to give up her seat to a White man because there were no more seats in their area on a Montgomery bus. Methods that African Americans use to deal with the inequality faced by the African Americans in that city were bus boycott, nonviolent protest, passive resistance, and peaceful protest.

A method that was used to gain equality is sit-ins, pickets, taking part in a public demonstration, filling up all of the seats in a Restaurant, sitting at the lunch counter, and nonviolent protest. Two goals of the March on Washington in August 1963 were to get jobs (equal employment opportunities), gain decent/acceptable housing, end segregation in Schools, gain more equal rights, increase the number of integrated facilities, end Jim Crow laws, gain voting rights, end police brutality, attain first-class citizenship, get equal restaurant services, receive decent pay, and pass the FEPC (Fair Employment Practices Committee) law, bring civil rights issues to the attention of the Government, and show Washington that they needed to do something to improve civil rights. There were many methods recommended but W.E.B Du Bois thought that they should fight for their rights and equality. Booker T. Washington believed that they should get an education and work their way up to equality.

African Americans still face challenges in areas of equal rights such as economic inequality, economics, African Americans are not getting jobs because of the color of their skin, they are not being paid enough for their labor, jobs, and job Discrimination, making less money than whites, they are still in an economic pit. In conclusion, discrimination is still active in America today. Even after the Civil Rights Movement, a disparity still exists in education, the work place and society. Today, unfortunately, discrimination and social segregation are more evident than it has ever been. 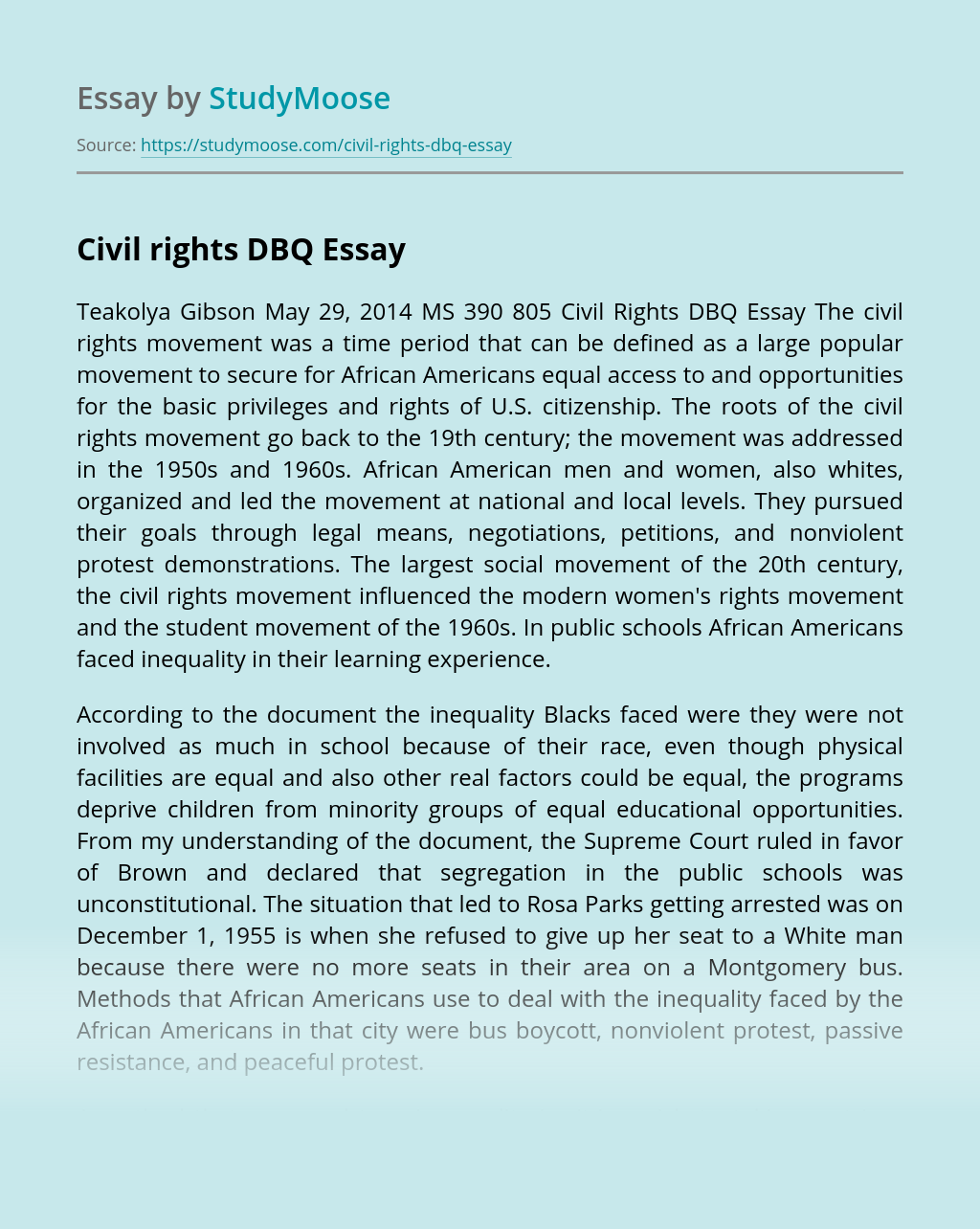 Rate this post Mahatma Gandhi’s Influence on the Civil Rights Movement of the United States Introduction             The influence of Mahatma Gandhi relating to peace movement was experienced as early as in 1920’s. His long-lasting dedication and support of passive resistance finally led to Indian gaining full independence in 1948. Gandhi fought for the Indians’...

Rate this post In the history of the American civil rights movement, two seminal figures emerge: that of the peaceful and nonviolent Martin Luther King, Jr., and the revolutionary and radical Malcolm X. From these two contrasting images, America did not know how exactly to classify the movement. On one hand, Malcolm X preached independence...

Get Essay
How significant was Martin Luther King’s contribution to the civil rights movement in the years 1956-68?

Rate this post There is no doubt that MLK shaped the way people campaigned for black civil rights in America during these years however weather that was significant to any head way they did make, one example of his significance is the amount of peaceful protest that was carried out, now that MLK was promoting...

Rate this post Black Lives Matter Movement vs. Civil Rights Movement Around fifty years ago, African-American’s sought out for full legal equality, which meant protesting against racial segregation and discrimination. This mass protest movement is known as the Civil Rights Movement. In recent years, there has been protesting, originating in the African-American community, which campaigns...

Rate this post In today’s society, it is often unclear where to draw the line between good morals and effective government. It is for this reason that many times, laws that are enacted for the “good of the people” can be in direct conflict with a person’s conscience. Due to the various struggles that the...

Why do people stand up to a cause? The civil rights movement

Rate this post In the literary material, it is through the first person narrative, that Walker adopts, that foregrounds the significance of religion and spiritual and therefore enhancing one’s identity. Religion and spirituality are inextricably linked and both relevant to the journey’s taken by both Celie and Nettie. However, it is also arguably limited, due...