Towns and cities have a long history in our world, but opinions vary on whether any particular ancient settlements can be considered to be a city. The first true towns are sometimes regard as large settlements where the populations were no longer simply farmers of the surrounding area, but began to take on specialized occupations, and where trade, food storage and power was centralized. By definition of the city, the first we know of were located in Mesopotamia and in Egypt along the Nile.

Turn in your highest-quality paper
Get a qualified writer to help you with
“ City of Mumbai (Bombay) ”
Get high-quality paper
NEW! AI matching with writers

Before this time it was uncommon for communities to reach considerable size, although there were exceptions such as Jericho and Mehrgarh.

Among the early cities, Mohenjo-daro of the Indus Valley Civilization was the largest, with an estimated population of 41,250 , as well as the most developed in many ways, as it was the first to use urban planning, municipal governments, grid plans, drainage, flush toilets, urban sanitation systems, and sewage systems. Our course examines politics and government of selected cites such as Chicago and Miami, this paper will shed light on Mumbai, one the world’s most important and fastest growing city.

Mumbai is the most populated city in the all of India and the home of world renowned Bollywood, yet there are still many that have never even heard of the city. This is mostly due in fact to its recent name change; the majority of people around the world still refer this city as Bombay but in 1995 the major city went under a name change and now goes by the name of Mumbai.

Present-day Mumbai was originally a group seven islands, and artifacts found near Kandivali, in northern Mumbai indicate that these islands had been inhabited since the Stone Age. Documented evidence of human habitation dates back to 250 BC, when it was known as Heptanesia. In 1534, the Portuguese took over the islands from Bahadur Shah of Gujarat, and named it Bom Baia, Portuguese for “good bay”.

In 1668 these islands were leased to the British East India Company which founded a deep harbor on the east coast of the islands to be ideal for setting up their first port in the sub-continent. Not long after, the population rose from 10,000 in 1661, to almost 6 times that in the next fifteen years. The year 1869 marked the opening of the Suez Canal, which transformed Bombay into one of the largest seaports on the Arabian Sea. Over the next few decades the city grew into a major urban centre, this was spurred by major improvements in infrastructure and the construction of many of the city’s institutions.

India’s independence in 1947 labeled the city as the official capital of Bombay State, and in 1950 with the incorporation of the southern parts of Salsette Island, the city expanded to its present limits. Until the 1970s Calcutta remained as India’s most populous city, but thanks to a construction boom and a significant influx of migrants, Bombay would overtake Calcutta and to this day hold the title of India’s most populous city. And finally as stated earlier, in 1995, the city was renamed Mumbai by the government of Maharashtra, in keeping with their policy of renaming colonial institutions after historic local appellations.

As of today the population of Mumbai is approximately 13 million, with a staggering density of roughly 29,000 persons per square kilometer. The ratio of women to men is about 81%; this gap is created by working males who come from rural areas. Mumbai’s overall literacy rate is above 86%, which is higher than the national average. Another surprising figure is the low crime rate; for a city of its size, Mumbai has a moderate crime rate. Mumbai recorded 27,577 incidents of crime in 2004, which is down 11% from 30,991 in 2001. The most common language spoken on streets of Mumbai is an informal form of Hindi, known as Bambaiya, which can be best described as a blend of Hindi, Marathi, Indian English and some invented words.

Unfortunately, Mumbai suffers urbanization problems resembling those in many fast growing cities in developing countries such as the ones we study in the course. Issues of widespread poverty, poor public health and high unemployment affect a large section of the population. Also, with little available space to live, Mumbai inhabitants often reside in overcrowded, yet expensive housing, usually far from workplaces, which leads them to make long commutes on crowded mass transit, or clogged air polluted roadways. According to the Business Week, around 45-48% of the population lives in shantytowns and slums.

Mumbai is known across the world as the commercial, but primarily, entertainment capital of India. When focusing on Mumbai it’s impossible to ignore its entertainment industry. Most of India’s major television and satellite networks are headquartered in Mumbai, as well as its major publishing houses. It is hard to find someone, even all the way here in Montreal that hasn’t seen a Bollywood movie. But its not all lights, camera, action in Mumbai, the city also houses important financial institutions, such as the Reserve Bank of India, the Bombay Stock Exchange, the National Stock Exchange of India as well as the corporate headquarters of many Indian companies. Thanks to its immense business opportunities and the relatively high standard of living Mumbai has attracted people from all over India and around the world which makes it a hodgepodge of diverse communities and cultures.

The bulk of Mumbai’s prosperity is no longer due to the textile mills and the seaport, the local economy has been diversified to include financial services, engineering, diamond polishing, healthcare and information technology. Mumbaī contributes 10% of India’s factory employment, 40% of income tax collections, 60% of customs duty collections, 20% of central excise tax collections, 40% of foreign trade and Rupees 40 billion (US$ 9 billion) in corporate taxes. The city is run by the Brihanmumbai Municipal Corporation (BMC) (formerly the Bombay Municipal Corporation), with executive power vested in the Municipal Commissioner, who is an IAS officer appointed by the state government. The Corporation comprises 227 directly elected Councilors representing the twenty four municipal wards .

Mumbai isn’t immune to the commuting nightmares that face the citizens of most modern-day metropolitans. The general public, even those considered the upper class, rely on public transport to travel to and from their workplace. The lack of car parking spaces, horrendous traffic and poor road conditions makes it pointless for even those who can afford it, to own a vehicle. None the less, Mumbaī is a very unique city, already over 13 million citizens it continues to grow but at the same time continues to prosper and become one of the greatest cities of the 21st century. 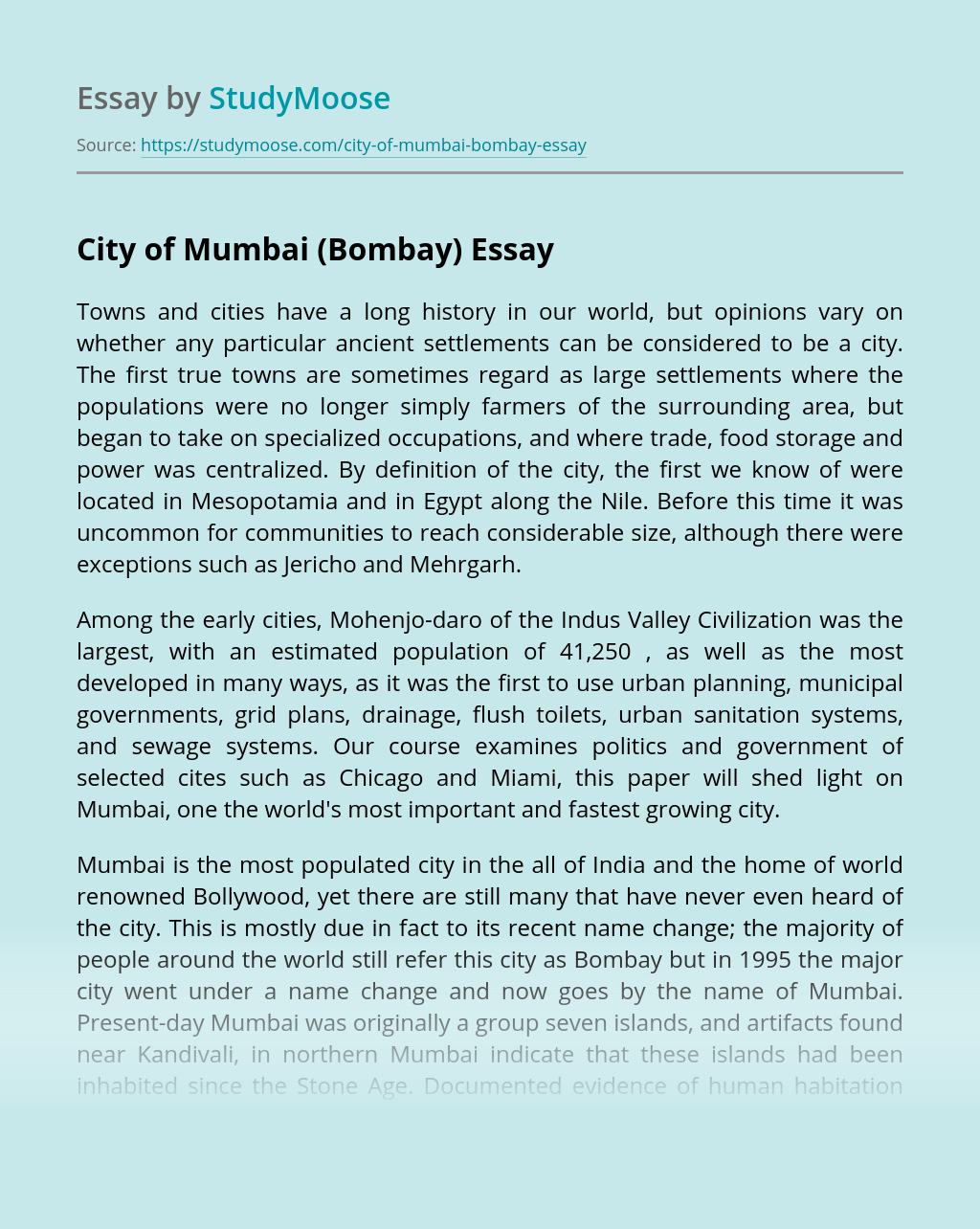 Turn in your highest-quality paper
Get a qualified writer to help you with
“ City of Mumbai (Bombay) ”
Get high-quality paper
Helping students since 2015
Stay Safe, Stay Original