The film Citizen Kane (1941), directed and written by Orson Welles and Herman Mankiewicz, is an American film drama that use various film techniques to illustrate themes, attitudes, and the development of a story. Welles’ use of camera angles, lighting, movement, symbolism and expression allow the audience to comprehend and understand the themes such as power and exploitation that are present in this movie along with many other themes that pertain to the life of the main character, Charles Foster Kane. Many of the filming techniques that are used in this film illustrate Kane and his feelings and transitions through and about his life.

Don't use plagiarized sources. Get your custom essay on
“ Citizen Kane by Orson Welles and Herman Mankiewicz ”
Get custom paper
NEW! smart matching with writer

Citizen Kane is a film that demonstrates the importance of how simple scene techniques can help develop a story.

After viewing the film, the audience comes to understand that the main theme of the movie is centered around the importance of childhood. Throughout the movie, symbolism is used to reinforce the theme. Thompson, the reporter, attempts to figure out the meaning of the word “rosebud”, Kane’s last words before passing away.

Kane’s life seems to be a mystery to some people, and the word “rosebud” is that missing piece to Kane’s life. Thompson never figures out what “rosebud” means, but at the end of the movie we see the word “rosebud” on the sled that was thrown into the fire. At this point the audience understands that rosebud is indeed symbolic of his childhood and the missing piece of his life. Earlier in the movie, Kane is outside playing with that same sled while his parents are discussing a plan to send him away.

“Rosebud” can now be connected to the snow globe which represents his childhood in Colorado. Thomson said that “rosebud” was a missing piece in a jigsaw puzzle. He is illustrating that Kane always felt that he lost his childhood and himself. All he had to show for it was that sled and the snow globe.

Further importance on the theme of his childhood is illustrated through lighting when Thomson the reporter investigates Tatcher to get a better understanding of Kane’s childhood. When he enters the room there is a very distinct, glowing light that is angled in such away that it focuses on a book containing information about Kane’s childhood. Right away, we see the importance of Kane’s childhood in the developing plot. To further emphasize this importance, when Thomson opens the book, the audience notices the very distinct contrast between the bright light on the book and the dark area surrounding the book. Throughout the movie, the director is hinting to the audience that his childhood is symbolic of something very important which just might be the answer to the question, “ What/who is Rosebud?”

By now the audience understands that that Kane was unable to have a normal childhood due to a lack of say and power. This is illustrated using a depth and focus effect. In the early parts of the film there is a scene in which Kane is outside playing while his parents and banker are negotiating his fate. The actors are ordered in such a way that the mother is always in front, followed by the banker, Kane’s father, and then Kane. Kane’s mother seems to have the power due to her position in this scene. It is important to notice that although Kane is in the far depths, he is still in focus, but with limited power. As we transition through the movie, Kane gains power and is in the front of this scene but there is always depth and focus in the shot to illustrate a hierarchy of power.

Another theme in the movie that is reinforced by this technique of depth focusing is relationships. As Kane develops through the movie, the audience recognizes that he is losing his power and his weakness leads to broken relationships. When he takes control of the Inquirer, he is constantly surrounded by people and they are not physically distant from him, but as his status on the hierarchical system dwindles down, he begins to distance himself from others in scenes. When Kane fires Leland, we see a great deal of depth and distance between the two but both remain in focus. In this same scene Bernstein is standing in the doorway at a distance away from Kane but he has no significance. The way the actors are positioned illustrate how Kane is developing as person and with other people around him.

When Kane gets taken away by Tatcher at a very young age, his life is transitioning into one of power and corruption. When his employees and partners welcome him for the first time at the Inquirer, all the shots are low angle shots. The angle also makes it seem as though Kane is significantly larger than everyone else in the subsequent scenes. It is as though the audience is looking up to him just as his employees are, illustrating the theme of power that Kane now holds.

Exploitation is a theme that begins to develop after Kane has taken control of the Inquirer. His need for power continues to grow and he becomes more and more corrupt. Not only is there corruption within his company, but he comes to exploit other peoples thoughts and ideas. As Kane obtains more power and greed, he gets the idea to run for governor, but in the process he gets exploited in regards to his developing relationship with Susan. This is where the movie transitions from power to weakness. Up until this point there has been many low-angle shots to illustrate Kane’s growing power. When Kane loses the election, the film moves transitions into high-angle shots.

Prior to anyone even saying that the election was over, the scene setting clearly illustrates that the election was lost. Even though the office looks like it is a mess, it is very empty. No campaign crew, no feeling. The shot then moves to Kane. During this scene Kane speaks with two different people but his face is down and hidden from the audience. The camera is constantly at a low angle illustrating Kane’s diminishing power. Furthermore, this is the first scene with Kane in which there is limiting lighting in the room, which reinforces the concept of an empty feeling.

As mentioned before, the director uses deep focused shots to illustrate a hierarchy of power. Throughout the movie, deep focused shots are also used to put significance on a specific actor. In the deep focused shots, actors are usually separated by long distances, like in the scene where Kane is talking to Susan across a long corridor with Thompson as the interviewer. When either Kane or Susan speak, the camera shot is always focused in front of them to draw attention to what they are saying. Another technique used to put focus on Kane throughout the movie is by drawing in on Kane by passing through and object or person through a continuous shot. This filming technique is used in the first scene of the movie.

The scene begins with the audience closing in on a “No Trespassing” sign, and then passes through the sign to reveal a house with light coming from one window. This might not be a significant amount of light, but the lighting does illustrate the importance of what lies beyond those windows. The scene continues through a garden, over fences, etc. but the whole time the lighted window stays in the same position, continuously bringing a attention to its significance. Of course as the scene continues it is that of Kane passing away and revealing the mystery which follows throughout the film. The director attempts to always keep the attention on Kane even when it seems as though he is fading out of the discussion.

The audience can always find a relationship between the characters of a story/film and the main themes. In the film Citizen Kane, the relationship between the characters and important themes are illustrated by filming techniques that range from camera angles to symbolism. Throughout the movie symbolism played an important role in determining the main theme and what “rosebud” meant. Kane’s development as a person and place in society was illustrated through camera angles, lighting, and depth. These techniques not only assists the audience in understanding Kane, but also understanding other characters and the relationship Kane had with them. 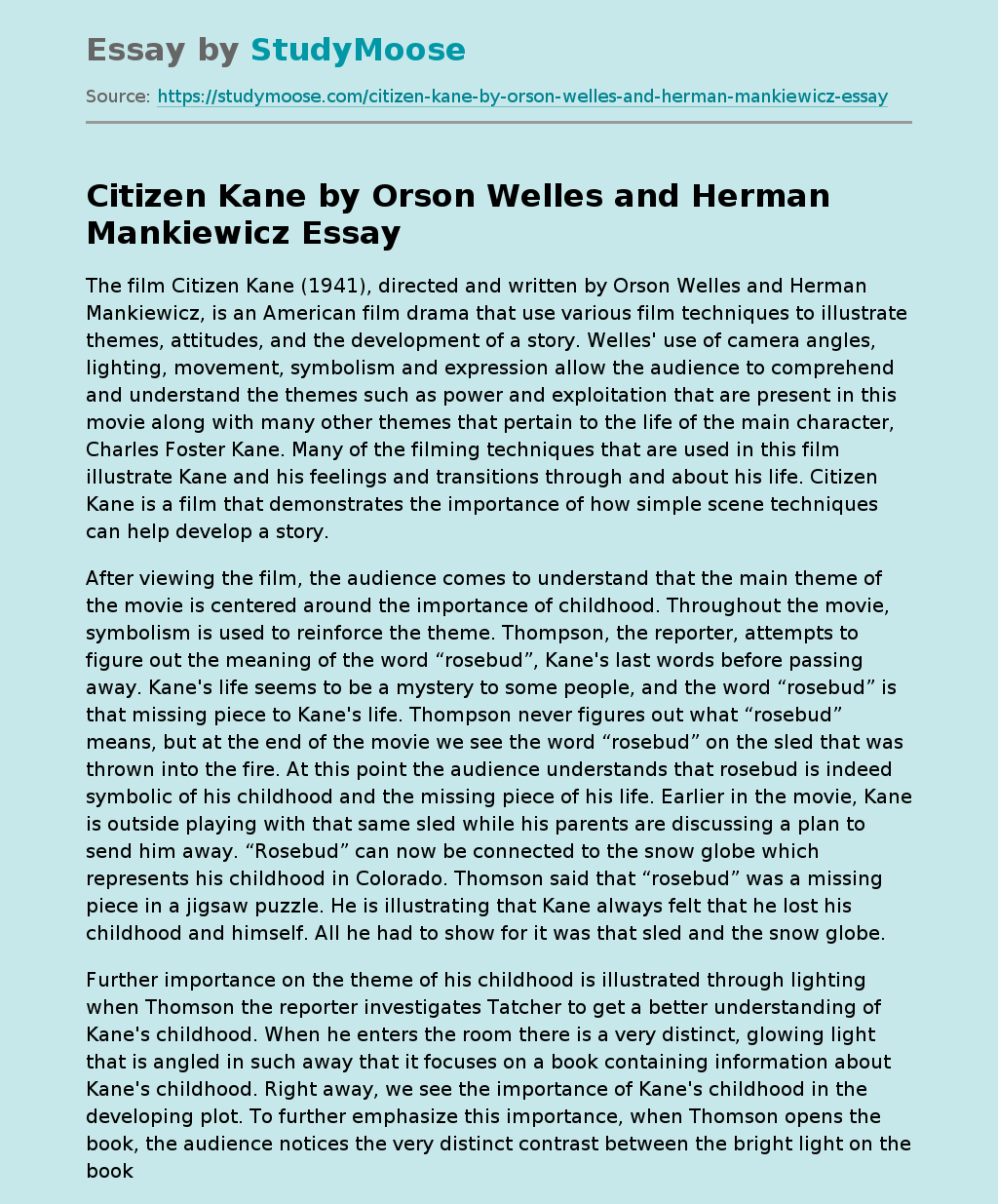