In Optimism, published in 1903, Helen Keller states “… Although the world is full of suffering it is also full of the overcoming of it.” By this she means that eventhough there is a lot of obstacles in life, there are people that have the power to move past them. I disagree with this statement. One work of literature that help disprove Helen Keller’s statement is the epic tragedy, Macbeth, by William Shakespeare. Another work of literature that disproves the statement is The Monkey’s Paw by W.

Don't use plagiarized sources. Get your custom essay on
“ Citation Disapproval With Literary Examples ”
Get custom paper
NEW! smart matching with writer

W. Jacobs. Both of these works use different literary elements to disprove the statement.

In the epic tragedy Macbeth the author, William Shakespeare, uses symbolism to show that the world is full of suffering and sorrow. One example is when Lady Macbeth cries, “Out, damned spot; out, I say . . . who would have thought the old man to have had so much blood in him?” in her sleep. The spots of blood Lady Macbeth dreamed she saw on her hands were symbolizing the guilt that she had for killing King Duncan.

Another example of symbolism in Macbeth is when Macbeth says “Will all great Neptune’s ocean wash this blood clean from my hand?”. Macbeth is feeling guilty because of all the live he has taken and all the lies he has told. These example help to show that the world is a place full of suffering.

In the twisted short story, The Monkey’s Paw by W.W. Jacobs, the author uses irony to show that the world is full of evil and suffering.

One example of irony in the short story is when Mr. and Mrs. White need money, so they make a wish with the paw for 200 pounds. They wait the next morning after their son, Herbert, goes to work for the money to show up. Later in the afternoon, a fancily dressed man pays a visit to the family saying that their son has died in a machinery accident. He then pays them 200 pounds for their loss. Another example of irony is when they wish for Herbert to come back to life. Herbert came back to life, but he was all destroyed from the machinery accident. Mr. and Mrs. White were terrified, Mr. White made a wish. They opened the door, and the road was empty. This short story shows that the world is evil and twisted.

In conclusion, the world is a cruel place. Ms. Helen Keller’s statement was disproved by the multiple examples provided. Macbeth killed many people trying to keep the secret of killing King Duncan. The White family was put through suffering: by having their son dead, having to see the torn body of their loved one, seeing the undead Herbert show up at their home, and living the rest of their lives kowing it was their fault Herbert died. 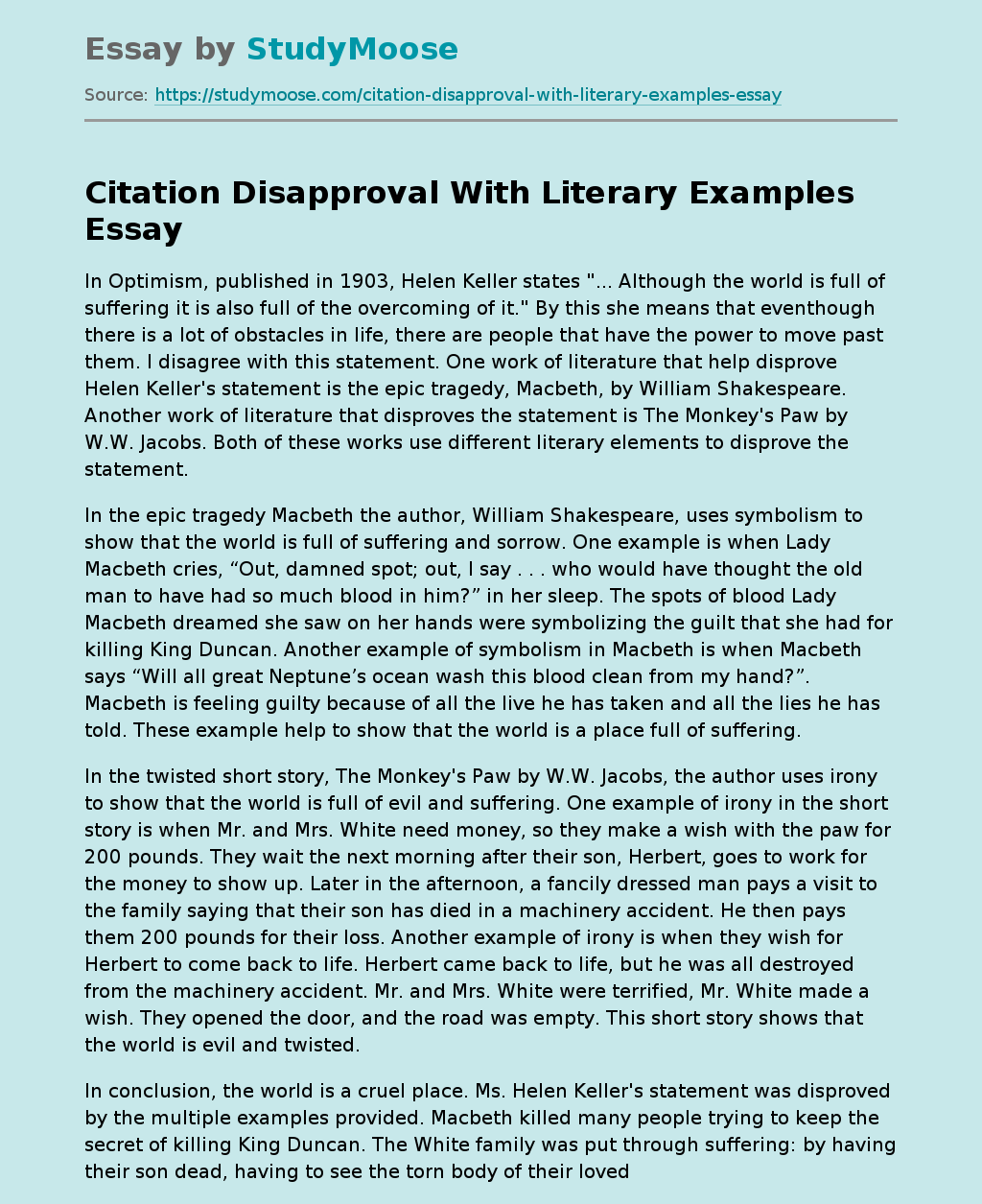