1). Which of the three approaches to accounting for extended warranty and service contracts is most consistent with the actual substance of a sales transaction involving equipment and an extended warranty contract? Approach number one, the Full revenue recognition is the most consistent due to the reasons which are demonstrated on exhibit two according to the Financial Accounting concept No.5. As stated in this exhibit, Revenues must be both realized and earned prior to the recognition. In this case, after selling the goods and services Circuit city at that point of sale both revenue and earnings have been realized because goods have exchanged hands.

Don't use plagiarized sources. Get your custom essay on
“ Circuit City ”
Get custom paper
NEW! smart matching with writer

At this point of time, even though the cost services haven’t been used, there is a clear agreement and assurance that the necessary services will be rendered during the period of the warranty Further in exhibit 2 it states four key components which justifies that the Full Revenue Approach is the best match of the sale of product and extended warranty because at the time of sale an entity will be considered to have substantially completed the earning process if: 1).

It incurs the selling cost

2). It has established service network, which is there for the most part to provide the customers with the service associated with the manufacturer’s warranty. 3). Relatively few customers call for service during the extended period 4). Estimates can be made with relative certainty as to future costs to be incurred under the extended warranty. Under these facts, Circuit city had met all the qualifications to report their revenues as they did.

The system was in place and the reporting of revenues didn’t seem to have any discrepancies. The information users (Share holders) seem to be happy with the results. Concurrently the profitability of the company as a whole appears to be fully maximized. 2).Why is this revenue reporting strategy is an issue to Circuit stores Inc? There is couple of reasons why senior vice president Michael Chalifoux is concerned: 1). He is concerned because if the proposed accounting reporting method goes to effect, there will be a delay on full recognition of revenue and income until the exhaustion of the warranty which will result lower income reported.

Lower revenue reports do not reflect well on businesses especially when they had previously shown signs of growth. The reasons might be understood internally, but not externally. 2). Vice president is also concerned about the negative impact on shareholder’s equity which would be significant in the merchandising industry. By showing low revenue earnings, some of the big companies who act as suppliers might be hesitant to do business with Circuit City because the chain might not be able to move their product as fast they anticipated. Such a change will cause a major loss of revenue which might cause the chain to gout of business. 3). If the company starts to show low income earnings, that change might cause second thought for the investors. Such suspicions cause investors not to invest in the business with confidence. Such a shift drives the stock market prices which may force the company to sell its shares at a lower cost.

3). What would be the effects on Circuit City stores financial statements if FASB requires them to change accounting for extended warranty and product maintenance contracts? 1). There will be definitely a change on reported revenue which is going to be lower that if the company had continued to report as previously. The change might cause a shake up within the company accounting department and the share holders, however it is my strong feeling that things will level out eventually. Even though sometimes change is difficult, Michael Chalifoux needs to have a very clear communication with the shareholders and the internal associates so they know what impact will the change bring.

4).What would Michael Chalifoux do? If the strategies of reporting are in place and there is no bleach of financial reporting in any way, shape or form, Michael does not have to change and adopt the new proposed reporting strategy. On the other side, if Circuit city is under the direction of FASB as a business entity, it is subject to the rules and regulations thereof. If it comes down to that FASB requires the reporting system to be changes, the vice president should do as proposed. In the long run it will be beneficial for the company public image. If the company goes to approach #2 which is full deferral of revenue, it will take couple years and things will level back again. 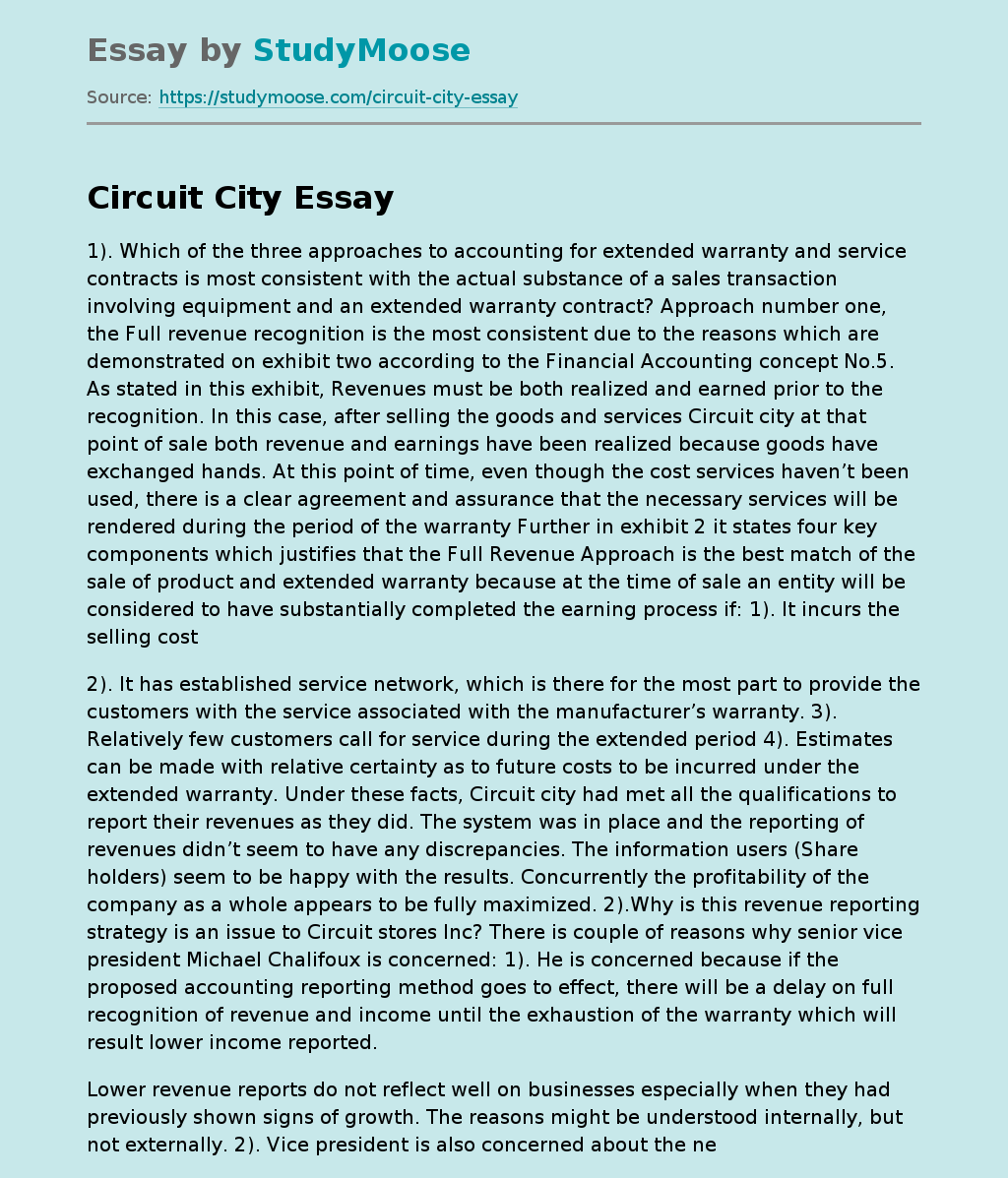