Psycho was a low budget movie. It was made in 1962 and was directed by Alfred Hitchcock. This film was to be different it was the first of its kind. It misleads people by portraying a sexy image when really it was to be a horror based on the notorious serial killer Ed Gein. To promote his new film Hitchcock used various techniques, for example the denotations of the poster was a red herring and mislead people in to believing the film had a sexy genre.

To get the film better publicity Hitchcock decided to make rules up for the film. These were the following once the film had started nobody else was allowed in. Moreover the audience were made to sit in absolute darkness after the film had ended. Hitchcock believed by doing this he would scare people more this would create more tension therefore giving the film a better effect.

Firstly they reflect the lights off the bright tiles; this was to show a sense of innocence. It made people believe nothing was going to happen. Hitchcock then shown the lighting so it was coming from behind the shower this created suspense, an additional reason was to cause dramatic irony this meant that the audience would see the killer, but the victim would be oblivious.

Tension was caused because we were waiting for the moment to happen. The killer was also backlit so we wouldn’t see his/her face.

In the parlour scene Hitchcock uses the lighting to make the birds shadow above Marrion and Norman. In effect this portrays the birds preying on their target; it makes the audience almost believe the birds will jump off the perches and attack. Hitchcock’s most remembered scene would be the discovery of Mrs Bates’ body. When we see Lila hit the light bulb we get the idea that the body of Mrs Bates is grinning at us.

Through Hitchcock’s masterful techniques he turned a low budget film into one of the greatest films ever. We notably see this through his choice of music. Slow music makes the audience feel calm. Were as when the music is fast the tension rises and people sense something is going to happen. We see this in the shower scene, the music is calm until she gets into the shower, then the music speeds up and this is when we suspect something is going to happen. To get this effect Bernard Herrmann used violins to create a tense atmosphere. Although in the film Hitchcock uses a lot non-diegtic sounds this meaning they are superimposed to add to the atmosphere and the tension. For example when Lila discovers Mrs. Bates’ body fast high pitched music is played. The music seems to react with Norman’s actions.

The most thought through technique of the film would be the camera shots and camera angles. Through Hitchcock’s clever use of camera shots and angles he made a fairly normal horror story into a highly successful horror film. Hitchcock deliberately places the audience in Marion’s perspective, then into the eyes of the killer. By doing this he makes the audience feel involved in the murder. This made the audience feel uneasy and tense. When Marion is stabbed and killed the knife never actually touches her as this wasn’t permitted in the 60’s. So Hitchcock uses something called a range of subliminal shots.

These are quick movements and shots used to emphasise the brutality of the murder. Then to create more tension between the audience he does an extreme close up of Marion’s face. This shows her fall to the floor with a tear in her eye in effect it looks like life is washing away. The still and lifeless shots put the audience in shock; this is because they believed Marrion would be the heroine. Slow close ups afterwards help the audience to absorb Marrion’s death. In the cellar when Lila discovers Mrs Bates’ body Hitchcock uses quick and sharp to put more emphasis in to the scene. When Lila touched the body and it spun around, Hitchcock made sure this was a long close up of Mrs Bates’ face. I think Hitchcock did this so the audience can take in the fact that Mrs Bates is dead.

We learn most about Norman through his dialogue in the parlour scene. At first he seems normal then further into his speech he begins to deepen his voice and the lighting dims down. In the shower scene there is no dialogue used, I think this is because Hitchcock believes this has more effect. The dialogue was also misleading as we thought Norman was talking to his mother when he discovers Marrion’s body as he says “Mother oh god blood, BLOOD!” Through the use of no dialogue it creates suspense; it is a dramatic effect for the audience. But through dialogue we can get an insight into each character. But it isn’t until the discovery of Mrs Bates’ body that we discover that Norman suffers from schizophrenia he dresses and acts like his mother.

To conclude I have found out that Hitchcock’s main techniques were the use of camera shots these being subliminal shots. These are quick moving shots to add to the suspense. The other main technique being the use of sounds like the diegtic and non-diegtic sounds. Ultimately I have learnt that through Hitchcock’s masterful techniques to create suspense and tension in the spectacular Psycho he has built a framework and moreover has had the ability to compel horror movies that would follow in the next 40 years. 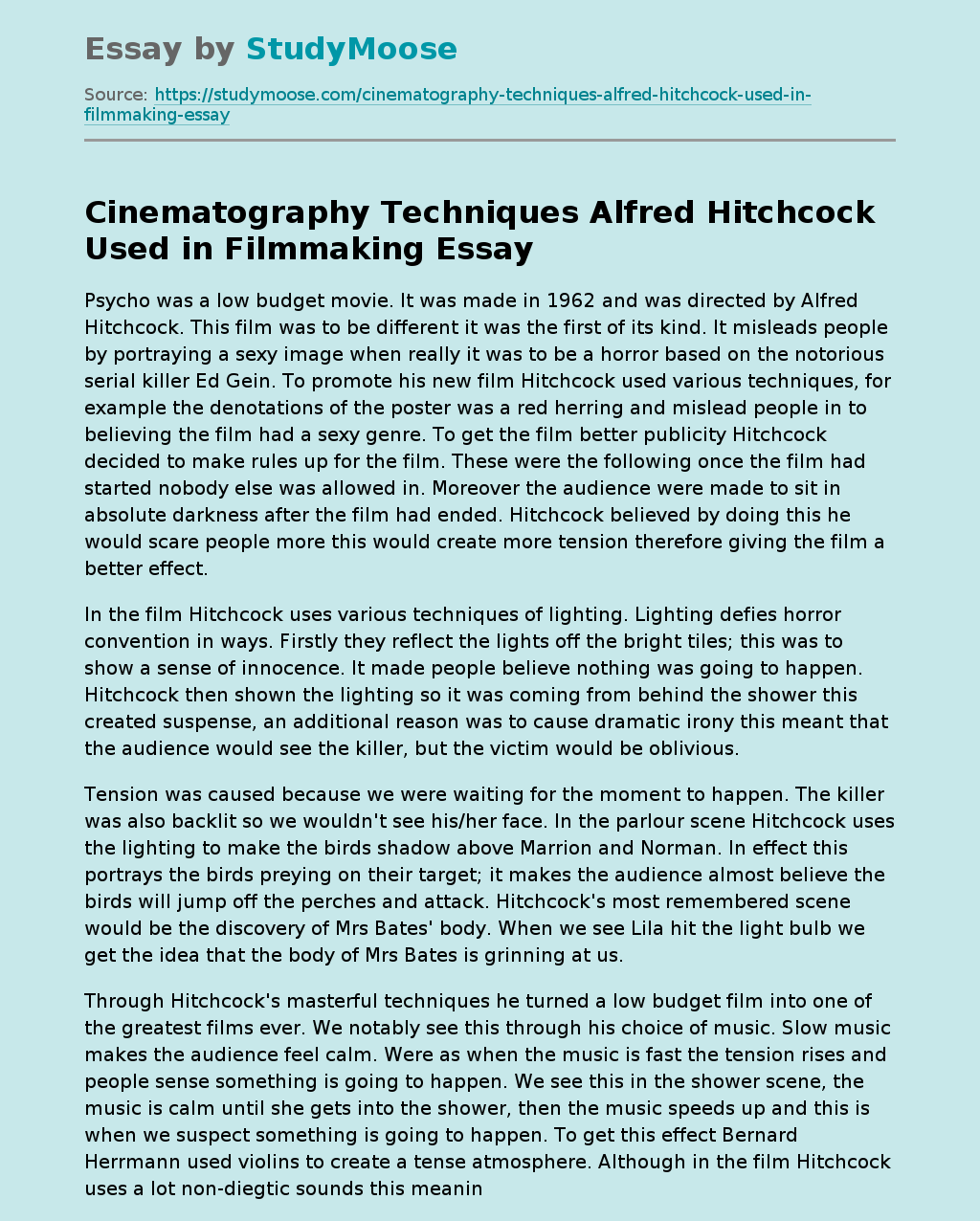